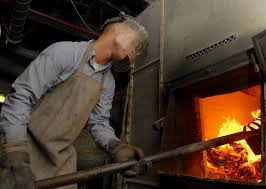 What are we, as intelligent sentient beings, to say about the incineration of over fifteen thousand aborted children for the production of electrical power in a U.K. hospital? Similarly, how are we to come to terms with the knowledge that Oregon’s Covanta Marion waste-to-energy facility was also being utilized as a modern day Molech?

When all is said and done, there is a certain ghoulish elegance in killing one bird with two stones, even as the political interests of both Feminists and Environmentalists  claim their Dark Victories through the suctioning and immolation of these potentially messy little “carbon footprints.”  And whether children pass out of being via a sink drain or through Baal’s fire becomes little more than a technicians’ calculation concerning BTU production — although those devotees of Gaia might derive a bit more satisfaction in the knowledge that little cremated bodies can now power up smart phones for the fortunate who have managed to pass through that maternal gauntlet unscathed.

From the vantage point of the Progressive worldview, such harsh efficiency can only be looked upon with grim amusement similar to what Goebbels and Eichmann themselves might have taken pride in.  After all, the economic advantages of slave labor, the systematic genocide of a hated race and the harvesting of gold teeth and skin for wedding rings and lampshades are part and parcel the glory of Modernity’s assembly line.  And who can argue with processes that have been enshrined with the legal fiction of positive law? In truth, in a world of men devoid of God, why shouldn’t shrewd and calculating men wax longingly for the opportunity to multi-task in heating their Shangri-La with the sweet savor of the unborn?

How did we arrive at this juncture?

Beneath the Humanist quest for man’s autonomy is a covert aversion to the enchanted quality of life – a seething passion that undergirds their rejection of the natural and embrace of the artificial. This is not to say that the liberal consciousness despises the natural world: for in fact, they are quite comfortable in its qualified deification. What they do detest is the idea of a sovereign sustaining Deity superior to and giving transcendent value to what is highest in nature. Out of hand, they vehemently reject the universe as a contingently created entity and any accompanying set of fixed moral laws that constrict in any way man’s range of prerogatives. In lieu of this, should we find it so surprising then that the mature philosophical core of liberalism is never so fully revealed except when it is engaged in its romantic notion of playing God and wielding death?

Whether through selective abortion or by the deadly spur towards an enlightened “voluntary” euthanasia for the chronically afflicted or geriatric, the Progressive “Will to Annihilation” ultimately discounts and disenchants the life that man could never of himself create. It is within this begrudging truth that a demonic jealousy lurks—even as it swears by its own name that no power shall be withheld from its hands.  Ultimately, mankind’s justice attending slaughter and suicide shall be had on our own terms. Having profaned life by warring down the eternal moral restraints, man in rebellion runs an indiscriminate scalpel across the throat of life, and calls it Utopia.

So great is this hatred for the transcendent frontiers that define humanity, that death itself becomes the primal force that animates Post-Modernity’s mocking existence. To wit, a merciless Science evangelizes its Gospel of Natural Selection predicated on a vast ocean of incalculable morbidity.  Nothing lies beyond the material world for those who honor neither nature nor revelation.  As a result, the brutish sacraments of: nascent infanticide, euthanasia, sterile homosexuality, faceless egalitarianism and the slow motion suicide of substance abuse are entombed within the very center of the Progressive’s barren project of human emancipation. By scrupulous design, these acts are antithetical to the Heart of God. Having declared war on the beauty of Life rightly understood, man’s terrifying visage looks out upon the fruit of their own beastly hands and pronounces these perversions as a species of “blessed liberty.”

Viewed through this corrupted prism, life and death become mere commodities that man has taken upon himself to barter and trade — sustained by the whims of calculation and mood. Unable to yet prevail in the creation of life ex nihilo, the Humanist/Materialist philosophies of man find solace in their perverse manipulation of death, and in relentlessly engineering their Dark City by pruning back the weak and defenseless — effectively herding mankind towards what are entirely human-centered ends. In the struggle between warm well lit hospital rooms and the biological utility of nascent life as ready fuel, we shall have our comforts and innocent life doesn’t stand a chance in Hell to offer its sorrowful refutation to the transaction.

Down deep–so very deep beyond our native perception; one can only sense with an awakened soul that the Anthropocentric  Mind– fettered to the dictates of a Dark Master it refuses to acknowledge as authentic, loathes life in its original and fullest incarnation. Inextricably harnessed to the Dark Constellation it orients and reasons by, the carnal Humanist soul will forever be alienated from that beautiful connected life within the Living God: the same Concentrated Life which had contemplated humanity’s inception and value before time was.

Depending upon how far along your heart is in its transition to stone, you might mock the sentiments of religious-based groups who routinely conduct memorial services for aborted children — expendable lives which were conceived in a night’s pleasure but later discarded with barely an afterthought. To the materialist/humanist: dead is dead, and tears are best shed for those who had at least provisionally tasted existence outside the womb. But the way which a godless society places an asterisk on life and dishonors its silent dead generally speaks volumes about the manner in which they also address the living.  Charity, or the absence thereof, is a function of the organic soul and whatever is pristine or filthy invariably flows from its reservoir — in spite of the political masks we adorn ourselves with for public consumption.

At the end of days, when man’s clay pillars are struck down and the scales have fallen from the world’s eyes, we shall find that man’s morbid philosophies have miscarried and that God has once and for all shattered death like glass — transfiguring its once terrible sting into the status of a child’s bad dream. With that nightmare then firmly behind us, then He who has conquered that villain Death shall be seen for whom He truly is — the Beautiful King of Life. We should exercise great care in how we attend to the precious works of His hands.

Glenn Fairman writes from Highland, Ca. He welcomes your correspondence at [email protected]  and can be followed at www.stubbornthings.org and on Twitter.

“A Nation Can Survive its Fools, and Even the Ambitious But it Cannot Survive…”

Quotes by Marcus Tullius Cicero (Ancient Roman 106 BC-43 BC) “A nation can survive its fools, and even the ambitious....