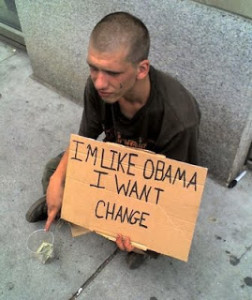 The news was a great hit in Canada, as Canadians finally found themselves better off than Americans. But in reality, we Canadians really don’t have anything to crow about; because it isn’t so much that our standard of living has vastly improved, as it is that America’s has so dramatically declined.

Harvard economist Lawrence Katz put it succinctly in saying; “The idea that the median American has so much more income than the middle class in all other parts of the world is not true these days.” You don’t say, Larry. Given that Americans have had the Obama economic millstone around their necks these past six years, it’s a wonder that more of them aren’t roaming the streets begging for alms.

When the Messiah was anointed in 2009, the economy wasn’t in great shape, admittedly. But after nearly six years of Obama “governance,” America’s economy has been devastated. First quarter economic growth this year is reported at 0.1%, which is among the lowest ever recorded. Of course the Obama administration is claiming that the unusually harsh winter was responsible for the lack of growth. Last year it was tornadoes in the south and mid-west. The year before that it was because of the tsunami in Japan and the years prior to that is was because of George W. Bush. The Obama White House appears to have no end of excuses for why their policies aren’t making a difference.

You may recall Obama’s contempt toward the concept of ‘trickle-down economics,’ associated with the Reagan White House of the 1980s. It was trickle down economics that saved America from the disastrous Carter years. Obama’s economy yields trickle-down penury as today fewer Americans are working than at any point since the Great Depression.

Currently nearly 50% of America’s work force is idle. The Bureau of Labor Statistics confirms that 93 million Americans are not participating in the work force. There’s a two-fold reason for this. The first is simple. The administration is keeping all these poor souls afloat enough so they won’t starve and their relief payments are structured in such a way as to make working undesirable. The sense of hopelessness is real and the Democrats exploit this hopelessness by claiming if it weren’t for “the rich,” the mean-spirited 1%, there would be no poverty.

Their pig in the poke entails the belief that wealth is a zero-sum game and all of America’s wealth has already been spoken for. In other words, new wealth cannot be created, as it is limited. And many no-information voters have bought into this fantasy, as it is an easy excuse for failure. Sure, blame it on “the rich.”

To exacerbate a bad situation, the Democrats attempt to institute policies, like a $20/hr. minimum wage that’s absolutely guaranteed to increase unemployment at the entry level and create more disaffected young people. Everything this administration has done has been counterproductive in terms of increasing social and economic mobility. The ‘punish the rich’ ethos that permeates the administration’s policies is abject thuggery, pure and simple.

Here is a statistic that will shock and surprise you. While the administration talks about punishing the rich through one side of their mouth, they create conditions that take a desperate toll on the middle class out of the other. The government bureaucracy currently metastasizing into grotesque proportions is costing the average American family close to $15,000 per year, or nearly 25% of the income of the average American family. These are hidden taxes buried in everything that Americans purchase to satisfy all the various and nefarious government regulations. These regulations cost us a staggering $1.8 trillion dollars. This is one of the reasons that the Canadian middle class is doing so much better than the American middle Class, even though Canadians pay a hefty price for their own government bureaucracy. That $15,000 is more than the average family spends on food or healthcare!

American corporations are legally keeping their cash off shore to avoid paying the exorbitant corporate taxes the Obama administration has imposed. Combined federal and state taxes for corporations run as high as a staggering 40%! Keeping their cash off shore makes sense, since that cash represents after tax earnings in the countries in which the profits were earned. Bringing that cash back into the US would amount to it to being taxed twice. Once off shore and once again when it’s brought into the US.

There are many big corporations that are doing this and it’s perfectly legal as well as sensible. For instance, Apple has in excess of $100 billion in earned cash on deposit in foreign banks. Pfizer, the nation’s oldest corporation has some $67 billion in off shore accounts and GE is said to have some $57 billion off shore.

The effect of this high corporate taxation is two fold. First, it’s a disincentive for these corporations to invest in new ventures in the US, thus ensuring that no new jobs are created. Worse, it’s an incentive for corporations to relocate to other countries, where taxation is less onerous. Currently both Pfizer and GE are looking at taking over companies in Europe, where the tax regime isn’t as onerous as America. Pfizer is looking to acquire London’s Astra-Zeneca, while GE is wooing the French engineering behemoth, Alstom.

There’s a reason that so many jobs are being “shipped off shore.” It’s because the Obama administration is ensuring that American corporations can’t create jobs in America by taxing away the capital with which to do so.

Finally, one is given to wonder how the stock market is able to reach record high territory in an economy that’s fraught with bad news. To me this is further proof that something stinks to high heaven. I’m not an expert in the stock market, but when the market grows in leaps and bounds on constant news of economic stagnation, high unemployment, record low interest rates, record high gasoline prices and all the associated ills; that tells me there’s a bubble somewhere filled with flatulent greed and manipulated results. If you have any money in the stock market, you’d be wise to take your profits and reinvest elsewhere.

This administration will likely go down as one of history’s worst. It’s a sad thing that so many Americans have to suffer the consequences of one president’s abject incompetence and criminally mendacious actions.

In Case You Missed It:  JUST IN: Pelosi Forced to Delay Vote on $1.2 Trillion Infrastructure Bill Due to Democrat Infighting
Posted in Financial and tagged Canada, Economy, Financial, Obamanomics, United Socialist States of America.

This week, the owner of the Los Angeles Clippers was not the only person exposed as a racist. U.S. Congressman...