Assistant Secretary of State Victoria Nuland and the Russian interception and leak of her now-infamous call to US Ambassador to Ukraine Geoff Pyatt. The call consisted of the two plotting to install a US puppet government in Ukraine after overthrowing the current, democratically elected government. 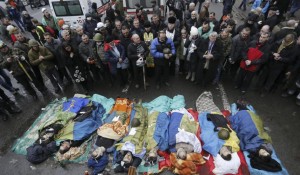 Obama’s idea of ‘Democracy’ in Ukraine

The Obama Administration had been falsely blaming Russia to the moment the recording was made public.  Nuland knew all along that this was not the case, and she did nothing while Obama continued to escalate the accusations against Russia.

Jay Carney, White House Spokesman, “It says something about Russia,” that they would tap the telephone call. State Department Spokeswoman Jan Psaki was even harsher, calling it “a new low in Russian tradecraft.”

But the telephone call between the two, we learned, was not conducted on a secure, encrypted telephone line that the State Department requires for such sensitive conversations and communication. Rather, the call was made over unsecured cell phones and thus easily intercepted with basic equipment that is widely available to anyone. Therefore it was not “impressive tradecraft” at all that led to the capture and release of the conversation.Nuland and Pyatt obviously knew that at the time, being the two parties to the call. They then either sat by and allowed US government official one after the other accuse Russia of going to great lengths to hack the call without admitting this fact, or they did inform their superiors but Administration officials decided to ignore this critical fact and push accusations against Russia anyway. You never want a serious crisis to go to waste, as it is said.RPI contacted a former State Department official to clarify security procedures for such a telephone conversation between high-level personnel. The official was clear:

I know well the seriousness of using an open line (aside from anodyne conversation) for high-level classified information that would clearly be embarrassing, if not damaging, not only for the US but also the EU. For using an open line for discussing highly sensitive national security matters, both [Nuland and Pyatt] should be reprimanded, at the very least.

So this was a serious security violation.The former official continued:

Assuming the telecon was made on insecure line, I find it curious, if not thought provoking, that Nuland’s profanity has managed to overshadow both the apparent security violation as well as the potential damage to national security of the substance of the conversation itself.

Indeed, the fallout from “Ukraine-gate” is astounding but sadly not surprising. The mainstream media in the US has focused solely on the Russian angle (now discredited) and on the salty language and particularly the false supposition that Nuland was using sailor’s language to indicate a serious rift with the EU on Ukraine policy. In fact, US and EU policy toward Ukraine is identical: regime change. The dispute is merely over velocity and is therefore cosmetic rather than substantive: should we travel 100 miles per hour or only 75 miles per hour toward regime change?As far as we have seen, there has been virtually no discussion of the substance of the telephone conversation in the US media. But the conversation was a confirmation of all theretofore denied accusations of US involvement in the current unrest in Ukraine. It was not simply US well-wishing toward the opposition parties. It was not simply a bit of advice and a wink toward the opposition. It was wholesale planning and brokering a post-regime change governing coalition in Ukraine, with the UN being ordered to come in and “glue” the deal.More precisely, as the Oriental Journal points out:

They agreed to nominate Bat’kyvshchina Party leader Arseniy Yatseniuk as Deputy Prime Minister, to bench Udar Party leader Vitaly Klitschko from the game for a while and to discredit neo-Nazi Svoboda partychief Oleh Tiahnybok as “Yanukovych’s project”

Shortly after “Ukraine-gate” broke, Sergei Glazyev, advisor to Russian president Putin claimed that the US was spending $20 million per week on the Ukrainian opposition, including supplying opposition with training and weapons.Nuland replied that such claims are “pure fantasy.”Perhaps, but that is just what Nuland had said previously about claims that the US was meddling in the internal affairs of Ukraine. And then the tape came out. That was just what she said about Russia’s “impressive tradecraft” in intercepting the telephone call. Then we discover that she was discussing highly sensitive issues over completely unsecured telephones.Is the US training and funding the Ukraine opposition? Nuland herself claimedin December that the US had spent $5 billion since the 1990s on “democratization” programs in Ukraine. On what would she like us to believe the money had been spent?We know that the US State Department invests heavily — more than $100 million from 2008-2012 alone — on international “Internet freedom” activities. This includes heavy State Department funding, for example, to the New Americas Foundation’s…

…Commotion Project (sometimes referred to as the “Internet in a Suitcase”). This is an initiative from the New America Foundation’s Open Technology Initiative to build a mobile mesh network that can literally be carried around in a suitcase, to allow activists to continue to communicate even when a government tries to shut down the Internet, as happened in several Arab Spring countries during the recent uprisings.

“Commotion Project.” What an appropriate name for what is happening in Ukraine.It is not a far leap from the known billions spent on “democratization” in Ukraine, to the hundreds of millions spent on developing new tools for regime-changers on the ground to use against authorities in their home countries, to the State Department from the US embassy in Kiev providing training and equipment to those seeking the overthrow of the Ukrainian government. The apparent goal of US policy in Ukraine is to re-ignite a Cold War, installing a US-created government in Kiev which signs the EU association agreement including its NATO cooperation language to effectively push the Berlin Wall all the way to the gates of Moscow and St. Petersburg.NATO has expanded to central Europe, despite US assurances in the 1980s that it would not do so. The US rolled over Russia in its deceptive manipulation of a UN Security Council resolution on Libya to initiate an invasion. The US continues to arm jihadists seeking to overthrow the secular Assad government in Russia-allied Syria. The US and EU have absorbed the Baltics, leaving their large ethnic Russian populations to dangle in non-person limbo. The US and EU had all but absorbed Georgia. Now the US is clearly in the process of absorbing Ukraine, with its strategic importance to Russia, its proximity, and its nearly 10 million ethnic Russian minority.Surely there is a point to where Russia will take steps to concretely limit its losses. In December Russian president Vladimir Putin said in a meeting with his Ukrainian counterpart Viktor Yanukovich that Russia and Ukraine should resume comprehensive military cooperation. Other bilateral defense agreements are already in place.What would have to happen to trigger a Ukrainian request to its close neighbor for assistance putting down a bloody and illegal coup d’etat instigated by foreign governments? Will US serious miscalculation of Russian resolve over Ukraine lead to a tragedy of almost inconceivable proportions? What if this time Russia does not blink?

Male Speaks Out, Breaks Silence About Being Victim of Domestic Violence