During a recent conference in Milan, Italy, an imam from the Al-Aqsa Mosque called on “Arab legions” to attack Jaffa and Haifa. 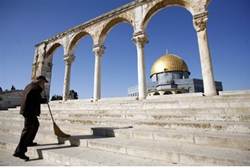 The public address delivered by Imam Raed Al-Daan aired on the Al-Jazeera network on April 27 and were translated by the Middle East Media Research Institute (MEMRI).

“In Gaza, I see orphans who have sprouted wings. In Gaza, there are great and proud men, whose feet are firmly planted in the ground, who have realized that darkness and the Jewish state would vanish, and that the morning sun will rise on Palestine,” said Al-Danna.

“We will return to the sea of Jaffa, to the sands of Haifa, to the palm trees of Beit Shean, and to the hills of Lod and Ramla. We in the blessed Al-Aqsa Mosque await the legions of the conquerors. We await the armies from Tunisia, from Jordan, from Egypt, from Iraq, from the Maghreb, and from the Hijaz,” he declared.

A member of the crowd can be heard responding with, “Allahu Akbar”.

These comments by the imam are just the latest example of the ongoing incitement against Israel by Arabs, much of which has been reported by MEMRI, Palestinian Media Watch and Arutz Sheva.

Such incitement ranges from the glorification of Nazism and the lionization of Adolf Hitler, to programs on official PA television featuring heavily-stereotyped Jews as villains (and encouraging violence against them), and various TV and radio shows which literally wipe the Jewish state off the map.

In addition, top officials in Palestinian Authority Chairman Mahmoud Abbas’s Fatah party have openly supported Hamas’s efforts to kidnap Israeli soldiers. One of these officials, Abbas Zaki, recently declared that “Allah will gather [Israelis] so that we can kill them.”

While the unity deal between Hamas and Palestinian Authority (PA) Chairman Mahmoud Abbas's Fatah faction have spelled the death of...