While the unity deal between Hamas and Palestinian Authority (PA) Chairman Mahmoud Abbas’s Fatah faction have spelled the death of the peace talks, further evidence documents how Fatah’s position mirrored that of Hamas even at the height of talks. 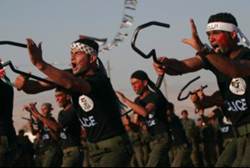 Last December, while US Secretary of State John Kerry was planning a diplomatic “January offensive” to force Prime Minister Binyamin Netanyahu to submit to US peace plans demanding massive Israeli concessions, Fatah official Tawfiq Tirawi was busy expounding his own plans of another kind of “offensive.”

Speaking at an event marking World Teachers’ Day, which was broadcast on official PA TV, Tirawi declared, “not a centimeter of Jerusalem will be liberated unless every grain of Palestinian soil is soaked in the blood of its brave people.” The statements were translated by Palestinian Media Watch.

Tirawi added that “negotiations will not bring Jerusalem back to us,” but rather that “the struggle” is the path to conquering the 3,000-year-old capital of the Jewish people.

Revealing the PA’s true intentions, Tirawi noted, “we have conducted negotiations, while not laying down the rifle. It [the rifle] may be resting but we will not neglect our principles.”

“From fighting to Intifada, to popular resistance, to negotiations – but we will not abandon [our principles] – not in negotiations and not in any other way. I say, from a position of responsibility, the negotiations resulted in nothing except for the [release of the] prisoners,” concluded Tirawi.

Indeed, Nabil Shaath, a senior official of the Palestine Liberation Organization (PLO), revealed in a November interview that the PA was only staying in the peace talks to release the jailed terrorists who were promised as a “gesture” for the talks.

Two weeks ago, mere days before the unity deal with Hamas, Tirawi declared the borders of “Palestine” replace all of Israel, including the coastal region. Meanwhile in April, he stated that the two-state solution is over, calling for a return to armed conflict.

Tirawi in late March said in Jericho that Fatah has “not cast down the rifle and has not let go of the rifle. The rifle is here!” He added that peace talks are only “one of the methods of struggle. But the rifle is here, and it can burst forth at any moment.”

He is only one of a string of senior officials in Mahmoud Abbas’s Fatah party and Palestine Liberation Organization (PLO) to have made similar comments.

In early January a senior member of Fatah’s Central Committee, Abbas Zaki, said that anything gained via negotiations would simply be the first stage in the ultimate destruction of Israel.

Fatah Central Committee member Tawfiq Tirawi last week posted a video to YouTube of his comments from a pro-terrorist ceremony in Gaza. In his speech mere days before the unity deal, Tirawi said Gaza “will return to the bosom of legitimacy.”

Tirawi added “the homeland…is…all of Palestine, from its [Jordan] River to its [Mediterranean] Sea,” describing a map that effectively wipes out the Jewish state. Palestinian Media Watch translated the video.

No doubts were left regarding Tirawi’s designs to replace Israel with “Palestine,” as he said: “Palestine – Gaza is part of it; the (West) Bank is part of it; and it is Haifa, Yafo, Akko, and it is all of Palestine, which will be an independent state for us, Allah willing.”

It is worth noting that the three cities mentioned are on the Mediterranean coast, and not on territory adjoining the 1949 Armistice lines.

Tirawi’s remarks were made in Gaza’s Khan Yunis during a ceremony for two terrorists imprisoned in Israel; one of them, Diya al-Agha, is serving a life sentence for beating an IDF soldier to death with a shovel in Gaza in 1992.

“Two-state is over, it’s time for armed conflict”

The senior Fatah official made similar statements in the beginning of April on terrorist organization Hezbollah’s Al-Manar TV.

Tirawi added “Palestinians, Palestinian leadership, listen to me: The only solution before us is the historic solution presented by Fatah in 1968.”

The reference to 1968 constitutes a clear call for Israel’s destruction through armed conflict.

Following the charter, the PLO and Fatah were defined internationally as terror organizations, a status which was removed during the 1993 Oslo Accords process.

Tirawi in late March said in Jericho that Fatah has “not cast down the rifle and has not let go of the rifle. The rifle is here!” He added that peace talks are only “one of the methods of struggle. But the rifle is here, and it can burst forth at any moment.”

PLO goals and definition of Israel

The original PLO Charter of 1964 also called for the “liberation of Palestine,” meaning the destruction of Israel, but added that the PLO does not seek sovereignty over Judea, Samaria or Gaza, which were under Jordanian occupation at the time. That additional demand for sovereignty was added to the updated charter in 1968, after the Six Day War when those areas came under Israeli control.

Also worth noting is the 1968 charter’s definition of Israel as “the instrument” of Zionism, which is called “a political movement organically associated with international imperialism and antagonistic to all action for liberation and to progressive movements in the world. It is racist and fanatic in its nature, aggressive, expansionist, and colonial in its aims, and fascist in its methods.”

Indian security agencies say a suspect has revealed in interrogation that Pakistan was behind planned terror attack on Israeli and...