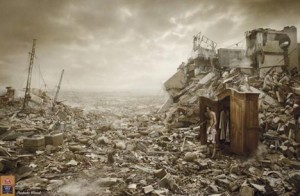 The great Roman historian Livy informs us that during the times of the Third Punic War, Cato the Elder ended every session of the Roman Senate with the phrase, “Carthago Delenda Est:”  Carthage must be destroyed.  Having suffered bitterly while battling for the supremacy of the Mediterranean with the fiery North African city state, rumors of Hannibal again amassing an army to confront his mortal enemy stirred the hearts of the Roman people, whose armies had once been soundly defeated in battle scant leagues from the city gates.

The Carthaginians honored their God Baal with human sacrifice, and it is said that Hamilcar Barca baptized his warrior son in the white hot hatred of Rome, sealing the fates of two distinct worlds that would vie on a multiplicity of battlegrounds for the perpetuation of their disparate visions of the world.  And though the Carthaginian general’s engineering of the Roman catastrophe at Cannae and fifteen years of fighting and winning battles in a hostile environment could have eclipsed the Latin dream of extending its “Pax Romana” throughout the known earth, it would be at Zama that Carthage was thought to be irrevocably broken.  But unburied ghosts often return when only attended to with half measures.

It is said that Scipio Africanus Minor, relying upon the good auspices that Hannibal was again seeding his loathing into Rome’s enemies through alliances, thought it prudent to invoke martial necessity and erase Carthage from the globe.  It is reported in Livy’s Histories that the men who were not slain in battle were sold along with the women and children into slavery as retribution and the spoils of war.  Moreover, every structure was razed to the ground, its rubble hauled away and the land itself was sown with salt so that it could be inhabited no more. In the end, Rome solved its Mediterranean dilemma and this bitter enemy would never again arise to trouble her again.

In our modernity, the phrase Carthaginian Peace is synonymous with any ruthless outcome supported by a treaty that creates a state of total submission in the defeated.  The Versailles treaty that proceeded from The Great War was thought to be such a one; and yet, the fact that Germany rose again to embroil the world in an even greater cataclysm is testament to this being a falsehood.  However, it is not my intent to deal with treaties but in half-measures – in particular, the half-measures and martial restraint that Israel has utilized as policies in dealing with both the Palestinian Question and Arab aggression in general….and how they shall proceed now that things have come thoroughly undone.

Let us be frank.  Oslo is dead. Or to put a finer point on it:  Oslo never saw the light of day.  Indeed, of all the myriad of ceasefires, treaty negotiations and understandings that have been born of the Israeli-Palestinian conflict, not one of them has ever been countenanced in good faith on the part of the latter.  To the Arab collective consciousness, the idea of a lasting peace with the Jew is anathema, and any negotiations, however earnestly lauded in the halls of the credulous liberal West, have been couched within the cunning anti-Semitic consciousness as a form of diplomatic warfare: a concerted effort of tactical compression and decompression expended not towards a state of hostile cessation, but towards the destruction of the “Zionist entity.”  Stated in fundamental terms, Israel desires peace and those in the ersatz Palestinian state desire an ethnic cleansing of the hated Jew; and no common middle ground exists where the fragile lily of reconciliation might grow.  Peace cannot survive in such a brutally inhospitable soil.

For anyone who has honest eyes not blinded with the ideological mendacity of the Left or deluded with the juvenile relativism of moral commensurability in defining these embittered competing adversaries, this is the current unvarnished state of affairs.  The “Land for Peace” chimera has been broken irrecoverably with the Jewish unilateral withdrawal from Gaza, and even the liberal Historian and Israeli gadfly Benny Morris has admitted that the Arabs have never been honest in their dealings.  When Hamas gained virtual control of Gaza the fate of the region was sealed, since within its own charter there is embedded the unassailable call for the destruction of the Jew.

In light of this, what is to be done?  No sovereign nation can allow itself to suffer silently while its virulent neighbor rains death down upon it.  As I write, radical Islamicist elements are warring for the control of Egypt and Syria and have brought the Golan region back into play, while Southern Lebanon is armed to the teeth with thirty thousand Hezbollah rockets, to say nothing of the morbid specter of nuclear Iran. Israel can ill afford any longer to play its dangerous game of appeasing the stunningly stupid West:  which has become drunk on borrowed wealth and Arab oil.  The time for half measures is nearing its culmination.  The snake and its brood must be burnt from their haunts.  Cathargo delenda est.

A people whose single minded fanaticism has become pathological has ceased to reason in its own best interests.  By using its population as willing accomplices by placing military installations and rocket batteries under and adjacent to mosques, schools, and apartment complexes, such a  moral calculus is self revelatory  of the inner workings of the Palestinian mind.  Primarily, it devalues the life of its own people in service to its cause: a cause that would not hesitate in destroying the same enemy domestic targets if given half the chance – just as it justifies the bombing of buses or the decapitation of infants in their cribs.  Similarly, such a conscience betrays its own relative ethical barbarism by holding the IDF hostage to its own elevated moral restraints – conflicted warriors who are loathe to inflict unnecessary injury and death, even in their just attempts to quell the rockets and mortar teams that hide cowardly behind quivering human shields.  We cannot lose sight of the reality that the outrage that attends collateral damage inflicted by the IDF and by Hamas is incommensurately perceived in both the Arab and Western world. Such is the handicap that Israel is hobbled with in waging a war of necessary self-preservation.

As the Carthaginians were willing and complicit in sacrificing their children to Baal’s fire in order to achieve their ends, so the Palestinians have so corrupted their  sons and daughters with the aggressive enculturation of death that little innocence is left to be found in Gaza, or in any corner of the earth where Islamicists hold sway over men’s minds.  Israel may soon have to wage a hot belligerent war on multiple fronts with an enemy that is as merciless as any Hannibal or Hitler.  That she may have to contemplate what has been up to now the unthinkable is the rotten spawn of the current state of affairs in this darkest of regions.  A curse may soon alight upon the hearts of men who loved ease more than justice, as well as on the human hands that desired revenge more than peace or the natural safekeeping of their own flesh and blood—fathers and mothers who knowingly conscripted their own to unholy fires consecrated to the god of this world.

Glenn Fairman writes from Highland, Ca.  He can be contacted at [email protected]

In Case You Missed It:  A few inconvenient facts about Biden's vaccine mandate
Posted in Freedoms.

Saving Us From Our Degenerate Selves

In the beginning there was a dream called America. And in that dream, our Founders, in the Enlightenment spirit that...