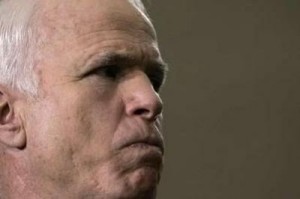 By Walid Shoebat–   Who better to explain what’s going on in Syria these days than the victims of the Jihadists? You can put Syrian Christians at the top of the list. Christian leaders from that country recently paid a visit to Capitol Hill and none other than Jihad-apologist, Senator John McCain (RINO-AZ) apparently gave the clergy a dress down for having the gall to accuse his Jihadist allies of slaughtering Christians in Syria.

The outburst was so bad that McCain’s sidekick clown, Lindsey Graham, had to calm him down.

Senator McCain, an Arizona Republican, evidently doesn’t want to hear negative stories about the rebels he’s working to arm. So he stormed out of a closed-door meeting with the Syrian clergy officials last week. Held in the Senate Arms Services Committee meeting room, the reunion also included senators Lindsey Graham of South Carolina, Sheldon Whitehouse of Rhode Island, Richard Blumenthal of Connecticut and Joe Manchin of West Virginia. Graham is a Republican and the rest are Democrats.

McCain marched into the committee room yelling, according to a high-level source that attended the meeting, and quickly stormed out. “He was incredibly rude,” the source told Judicial Watch “because he didn’t think the Syrian church leaders should even be allowed in the room.” Following the shameful tantrum McCain reentered the room and sat briefly but refused to make eye contact with the participants, instead ignoring them by looking down at what appeared to be random papers.

The outburst was so embarrassing that Senator Graham, also an advocate of U.S. military intervention in Syria, apologized for McCain’s disturbing outburst. “Graham actually apologized to the group for McCain’s behavior,” according to the source, who sat through the entire meeting. “It was truly unbelievable.”

Judicial Watch then invokes a name from the past – Elizabeth O’Bagy – while implying that she may play a significant role in McCain’s pro-Jihadist mindset. Remember, she accompanied him on his controversial trip to Syria last year, during which he was photographed hanging with terrorists. After O’Bagy was caught being untruthful about her qualifications and allegiances. During an interview with Neil Cavuto last September, O’Bagy attempted to diminish her role with the Syrian Emergency Task Force (SETF), despite being featured prominently on the group’s website as a Political Director.

O’Bagy was then fired by another entity she worked for – the Institute for the Study of War. As all of this was going on, the SETF ever so subtly began removing staff members from its website (about one per week), including O’Bagy.

As for McCain’s pre-adolescent outburst with Syrian Christian Clergy, it’s hard to say but he’s had a run of bad luck since throwing in with the Jihadists. Cognitive dissonance might be as good an explanation as any. Let’s not forget the damning report that came out, via McClatchy just days before that outburst. It concluded, much to McCain’s chagrin, no doubt, that the Chemical weapons used last August 21st in Syria, could not have come from Assad’s forces, as we continually demonstrated.

It would seem that McCain is having a bout of cognitive dissonance. Based on his outward behavior, he might be put on bed-wetting watch (psychological defense mechanism known as Regression).

This outburst on McCain’s part is a new low for him. It’s bad enough that he has supported a policy that has empowered Jihadists who murder Christians. Now he all but spits on a delegation of Christian clergy from the region, who seek help and protection from those Jihadists.

PLEASE CONSIDER A ONE-TIME OR MONTHLY DONATION TO RESCUE CHRISTIANS