The report begins in the streets of Baghdad. As two army soldiers drive through Baghdad in a convoy headed for the 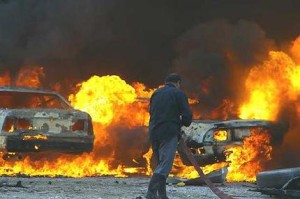 green zone, a car bomb explosion is caught on tape. Fearing another car bomb could go off soon, which so often happens, the soldiers make a run for the safety of the green zone – when they’re out of harm’s way, they say:“Well, that’s better than a cup of coffee in the morning…”

It is a truly chilling event in an urban setting where there are so many people. But if Al Qaeda has its way, the same scenario will play out in American urban areas soon. In a recent issue of Inspire Magazine, regarded as the Vanity Fair of the Muslim community, Al Qaeda calls for Jihad car bomb attacks on certain American cities – including Los Angeles, Chicago, Washington D.C., New York and northern Virginia where the CIA is headquartered. Ron Bee is a former State Department and Pentagon employee and was asked what would happen if a car bomb were to go off at a major American shopping mall, and what would be the impact on the American economy?

“People would stay home, they wouldn’t go to the malls. They’d go home to wait to hear that (all was OK)… we all know what happened after 9/11: everybody stayed home. They didn’t go shopping. They didn’t fly. The airlines went under, so it could have a major impact.”

“Many Fiesal Shahzads like Muslims are residing inside the USA right now and all they need is the knowledge of how to make car bombs… and the good news is it can be prepared in a home kitchen.”

“That’s true. A lot of things are on the internet and the folks in Boston learn how to make their bombs off the internet and in magazines like Inspire, which is the same magazine that’s advertising home-grown terrorism here in the United States. So, it’s possibly to do, but at the same time, we have a very diligent Home Land Security squad FBI that’s keeping track.”

Al Qaeda makes requests: “the important thing is that you target people and not buildings.”

“That’s what terrorists do: terrorists have a religious cause and they kill innocent people. That’s Al Qaeda. So of course that’s what they’re going to say, and it also gets our attention when it’s a bombing that kills innocent people because they usually have nothing to do with any political cause.”

Al Qaeda continues: “the American government was unable to protect it’s citizens from pressure cooker bombs in backpacks. I wonder if they are able to stop car bombs.”

“We’ve always worried about this sort of attack, ever since coming to the United States, and now Al Qaeda is saying that home-grown terrorists should conduct those sorts of attacks. This is, I think, the response in the up-tick in attacks against Al Qaeda in places like Yemen, with drones in a variety of places around the world including Africa. We’re soon going to see some activity in Nigeria; the idea here is they’re trying to hit back at us in retaliation.”

But there are some who say Al Qaeda’s call for car bomb attacks in American cities is a sign of desperation – that the terrorist organization is on the ropes.

“You can read this a couple of ways,” said John Miller of NYPD Intelligence. “One way you can read Inspire Magazine is it is some kind of sign of failure, Al Qaeda central has diminished to the point that it has to put out this wide net and say ‘can anybody do anything? Because as an organization, we’re not effective that way.'”

The thought of car bomb attacks that happen in Iraq happening in America is truly disturbing. The hope is that those bombers will think twice before taking on America, but for the jihadist Islam comes first.  Islamic car bombs have happened in England, and Muslims have attacked a mall in Utah in the United States.

In Case You Missed It:  9-11-2001 NEVER FORGET
Posted in Terrorism and tagged al-Qaida, Jihad, Muslims, Terrorism, US Citizen.

US Postal Service Loses $1.9 Billion; Needs $10 Billion Bailout Or Pensions Get It

Revenues are up modestly for the US Postal Service as First-class Mail volumes continue to tumble "extremely" but package volumes...