(Investors Business Daily)  Climate: What do you do when your once-formidable political machine is falling apart? Why, gin up a good old-fashioned emergency, of course. Which explains the latest government scare-report on global warming. 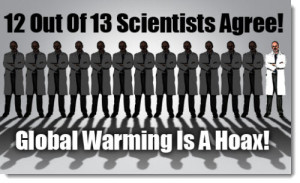 Obama’s “fact” concerning climate change will most likely mimic many other of the President’s “facts” including his most famous fact of all:

It asserts as fact, for instance, the unknowable and unprovable: That the climate’s many effects are “expected to become increasingly disruptive across the nation throughout this century and beyond.”

This from a group of heavily politicized climate “experts” who, if called on to predict next week’s weather could not. The report even coins a new term to describe this: “climate disruption.” It’s meant to frighten.

Sorry, but whenever a bureaucrat or agency comes out with something this alarming in an 840-page report, it pays to scrutinize what’s really happening.

In this case, Barack Obama’s presidency has been on a steady slide for at least a year now as Americans glimpse what his disastrous health care takeover has done to our once best-in-the-world system, and as former allies around the world scratch their heads in wonder at our stunning diplomatic duplicity, incompetence, lack of will and weakness.

With the economy no longer turning out millions of high-paying jobs as it once did, and Obama’s left-wing promises looking more and more threadbare and fraudulent, the president needed something really big to get back on top.

It seems he found it with the weather. What’s the best way to simply declare an emergency and wield power without consent or involvement from Congress? That’s what this report is for.

It has nothing to do with climate, everything to do with power. It’s a green coup, with Democrats in Congress apparently acting as willing, even eager, stooges for the most far-left president in our nation’s history.

Obama’s top political adviser, John Podesta, has made it clear what the White House is doing. The president plans to issue executive orders under the Clean Air Act to cap carbon dioxide emissions — and use them to control the entire economy.

What if Congress objects to Obama trying to shut down the economy through executive orders? “They may try, but there are no takers at this end of Pennsylvania Avenue,” Podesta said at a Monday White House press conference.

This is straight out of extreme leftist Saul Alinsky’s “Rules for Radicals.” It’s Rule No. 9, to be exact: “The threat is usually more terrifying than the thing itself.”

There you have it. Create a distraction. Create fear. Seize more power in the confusion. The Alinsky way. With the Obama era on the wane, that’s still the plan.

The politicized National Climate Assessment should be seen in this perspective — not a scientific document, but a political one.

John Holdren is in the news for his latest attempt to rebrand “Climate Change” (formerly “Global Warming”) as “Climate Disruption.”...