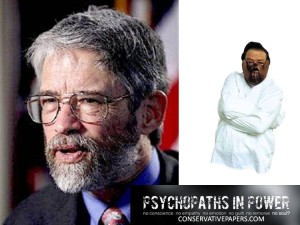 John Holdren is in the news for his latest attempt to rebrand “Climate Change” (formerly “Global Warming”) as “Climate Disruption.” Interesting editorials about this effort can be found many places.

But what is more interested in talking about is John Holdren himself. Just who is he? What sort of man does President Obama have advising him on scientific issues?

The answer to those questions is actually quite frightening. John Holdren is adangerous left-wing extremist, an ideologue who has expressed open support for forced abortions and mass sterilization programs of White People.

This deranged madman this is possible a clinically insane psychopath has also written of his support for policies that would have the state forcibly take children away from single mothers, as well as the creation of a totalitarian “Planetary Regime” (his term) that would be put in control of the global economy. Again, it’s important to emphasize that this isn’t just some random tenured radical; this man is a Senior Advisor to the President of the United States Barack Obama.

As the Obama regime grows increasingly autocratic, unelected and unaccountable “czars” like John Holdren will inevitably begin to wield more power and influence. It may be a good time to stockpile some sterilant-free nonperishables.

In Case You Missed It:  Project Veritas Whistleblower: Washington Nursing Home Patient Dies After Being Given a ‘Chemical Restraint’ to Coax Her Into Taking Vaccine Against Her Will; Was Allegedly Told Jab Is a “Flu Vaccine” – (VIDEO)
Posted in Tyranny and tagged Global Warming, Obama, Racism, White House.

We’ve been looking in the wrong place. Until now, anyone trying to figure out what really happened at Benghazi has...