Turkey has been told it must pay 90 million euros in compensation over its 1974 occupation of northern Cyprus. The money will compensate Greek Cypriots who suffered human rights abuses. 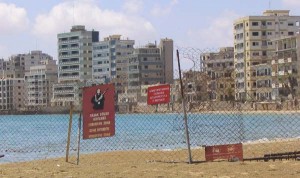 The Ghost Town of Varosha, Famagusta Cyprus which was taken hostage by the Turkish Army in August 1974 and has been used as a bargaining counter since that date.

Europe’s top human rights court ordered Turkey to compensate Cyprus over its invasion of the island and its subsequent division. The island has been split since 1974, when Turkish troops invaded the north, responding to a coup orchestrated by supporters of a union with Greece.

Only Turkey recognizes the breakaway Turkish-Cypriot state in the north of Cyprus. The case before the European Court of Human Rights was brought by the Cypriot government in Nicosia, an EU member, in the southern half.

Cyprus held Turkey responsible for the disappearance of 1,500 Greek Cypriots and the displacement of 200,000 others, as well as the violation the basic rights of Greek Cypriots who remained in the north.

The court’s decision on Monday, given in the French city of Strasbourg, said that Turkey’s responsibility had not been erased over the passage of time. It was ordered to pay 30 million euros ($41.27 million) to relatives of those missing, and a further 60 million euros ($82.5 million) for “the enclaved Greek-Cypriot residents of the Karpas peninsula.” It will be up to the Cyprus government to determine how to award the damages.

The court also found Turkey guilty of violating several articles of the European Convention on Human Rights. This includes the right to property and prohibiting inhuman or degrading treatment.

Turkish and Greek Cypriot communities have recently begun a new effort to reunite the island. It is not yet known what effect the ruling could have on these discussions. Greece and Cyprus are both EU members, a status sought by Turkey, itself part of the NATO alliance.

The Obama administration appears to have a terrorist “hands off” list that permits individuals with extremist ties to enter the...