Hunter Biden, son of US VP Joe Biden, is joining the board of directors of Burisma Holdings, Ukraine’s largest private gas 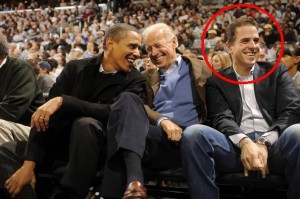 producer. The group has prospects in eastern Ukraine where civil war is threatened following the coup in Kiev.

Biden will advise on “transparency, corporate governance and responsibility, international expansion and other priorities” to “contribute to the economy and benefit the people of Ukraine.”

Joe Biden’s senior campaign adviser in 2004, financier Devon Archer, a business partner of Hunter Biden’s, also joined the Bursima board claiming it was like ‘Exxon in the old days’.

Biden Jr.’s resume is unsurprisingly sprinkled with Ivy-league dust – a graduate of Yale Law School he serves on the Chairman’s Advisory Board for the National Democratic Institute, is a director for the Center for National Policy and the US Global Leadership Coalition which comprises 400 American businesses, NGOs, senior national security and foreign policy experts. Former US President Bill Clinton appointed him as Executive Director of E-Commerce Policy and he was honorary co-chair of the 2008 Obama-Biden Inaugural Committee. Burisma Holdings was set up in 2002. Its licenses cover Ukraine’s three key hydrocarbon basins, including Dnieper-Donets (in eastern Ukraine), Carpathian (western) and Azov-Kuban (southern Ukraine). The Biden board news came as Gazprom moved Ukraine to a prepaid gas delivery regime and sent Naftogaz, Ukraine’s gas champion, a $1.66 billion bill that is due June 2, or Moscow will halt supplies. Ukraine currently has about 9 billion cubic meters of gas in storage, but by the winter needs 18.5bcm. Kiev bought 27.7 billion cubic meters from Gazprom for which it still owes some $3.5 bn in 2013. Gazprom is demanding Kiev pays $485 per 1,000 cubic meters, raised from $268.50 after Moscow was forced to cancel several discounts agreed upon under Yanukovich’s tenure as president. Kiev rejects the new price as “politically motivated” and says it will only pay its debt if Gazprom lowers the price back to $268.50, or else open an arbitration case against the company in Stockholm.

(CNSNews.com) - The Center for Reproductive Rights, a non-governmental organization that advocates for legalized abortion, is urging the United Nations...