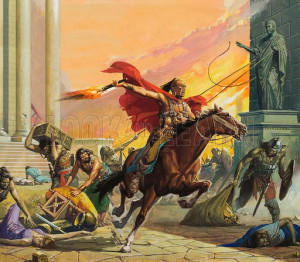 Now that we can see through a glass more clearly, which of us can deny that the American Academy surrendered without a shot to its barbarous and intellectually unwashed, following a rough descent into slavish cultural Deconstruction?  As such, the old guard’s aptitude for disinterested inquiry was seized and corrupted via a balkanized identity politics and a post- modern worldview that has wildly succeeded at dividing society into alienated warring camps.

As a witness to that bloodless capitulation, I found that this new progeniture of professorial triumphalists were markedly inferior in both erudition and gravitas to their predecessors and that the ranks of these Young Turks were generously constituted with perpetually dissatisfied utopians. In fact, these tin-plated revolutionaries were little more than partisan shills with an ax to grind and a seething animus against the gods of the greater culture. Consequently, there should have been little surprise when they denounced their detached search for objective truth and embraced liberalism’s political jihad to remake the world in Humanism’s feeble image.

As the crowning result of the Left’s long march through the academic institutions of the Humanities, the dinosaurs of the ancient regime fled into retirement or were unceremoniously purged as the earth’s ideological poles reversed. With the forces of “reaction” spent, the academy’s once august positions were filled by a more dogmatic, less intellectually tolerant species — whose ends were no longer the assault of ignorance or in moving from opinion to knowledge, but as a brood of carnal monastics dedicated towards the advocacy of the One True Path.

Any student who has had the misfortune of enduring these insufferable Jacobins knows intimately of what I speak.  For the crime of slandering liberal orthodoxy, one could be called out or relegated to the outer darkness by the effortless rolling of eyes, the condescending grin or the boisterous laugh — followed shortly by the dry expressionless question: designed not towards engaging in dialogue, but to firmly put you in your place.  And if shyness or the possession of a non-confrontational nature did not therein quiet you, one could always count upon the True Believers amongst your brethren who possessed the selfsame pack mentality as the famished coyote. These lockstep drones intuitively understood the court etiquette of ideological tyrants, and knew well that the act of hectoring and humiliating the Master’s cowed and cornered prey could only enhance one’s academic standing.

Being a Conservative in the belly of the Social Science beast is a thing to behold, like a Dante descending into Hell’s circles of torment.  Within the orthodox confines of graduate seminars, one could not find more “accommodating” intellects – apt pupils who would have fit in quite nicely as guardians of Soviet re-education camps. One could not find a duller and less introspective brute, especially in the lairs of any courses involving Identity Politics.  Within this arena, Progressives had by far the lowest possible cumulative GPAs and were constantly speaking in the brogue of justice and emotion.  All discourse was tainted with the same illiterate Marxian/Materialist thread of analysis that permeated even the most apolitical of discussions. The pursuit of respect through power seemed to be an obsession with the True Believer. Moreover, this sham of Identity Politics allowed for a maximization of political posturing with a minimum of work and collectively created an ideological echo chamber of closed circular minds fed on a diet of bitterness against a backdrop of grievance. Nevertheless, what could never be fully articulated was the nascent understanding that their Leftist project was purely personal and that these types of courses fundamentally embraced an affirmative action clientele whose talents were near universally shallow and subpar.

Today, the content of these memories, against a backdrop of so many years, have not abated like a bad dream. nor has reason reasserted itself in the Academy.  Indeed, students within the humanities are measurably less literate and more propagandized — although the indoctrination they suffer from has not been so much a function of undergraduate education, but flows from the subtleties of a squalid elementary classroom.  In truth, the contemporary mind has been incrementally inoculated against the foils of God and Reason, and the culprit is not so much the wild eyed Leninist professor who spewed lies and vitriol to the educationally unbalanced neophyte, but the smiling 3rd grade teachers who exuded “nice” and whose vacant philosophies demanded that the world, by definition, should be a place of puppy dogs, rainbows and equal outcomes. With such effeminate tools are today’s socialists made. Indoctrination no longer requires the blunt cunning of force or fraud: for the 10,000 little subliminal lessons attained from the school house are enough to ensure that the young human mind is waylaid and bound for its lifetime to the hive. And this parched catechism of ignoble half-truths, along with the gargantuan power of the media, will guarantee that few will ever escape, except by way of the unyielding recitations that accompany the knock-out punch of nature and reality.

How perilous the minefield of public education has become since the days of McGuffey’s Reader.  Although information has increased exponentially, humanity is all the more stupid in things that truly count, while the conceptions of truth and value have fallen by the wayside — leaving the entire enterprise of education in doubt.  Knowledge thus becomes an instrumentality to a temporal end and is as divorced from the classical search for the Good Life as it is of moral excellence or Man’s metaphysical ends.  Against all earthly prudence, the pursuit of truth and the First Things  of being  have been sacrificed in the service to ideology and those sworn to the service of education have becoming little more than the State’s High Priests of Orthodoxy with each passing generation.

Soon, with the benediction of the Common Core, or whatever pedagogical shakedown is offered from our Centralized Masters, a great homogenization will flow across the land. We shall not see an increase in understanding, but a narrow leveling of vision and wisdom that renders the farm boy in the Bible Belt and the bastard child of the ghetto as interchangeable as bolts on a Chevy. As such, America will have finally gotten what the Progressive’s have dreamed of: a substantive equality of result: not only in economics, but of the mind.  Without the impediments of a thousand competing voices pleading for their share of the human soul, the State will finally have the monopoly of hearts and minds it needs for attaining its quest of the Universal Homogenous State.  Having firmly dispensed with Socrates’ “Unexamined Life,” that great tower of Nimrod can once again be attempted:

One ring to rule them all, one ring to bind them…….

Glenn Fairman writes from Highland, Ca.  He welcomes your correspondence at [email protected]  He can be followed at www.stubbornthings.org and on Twitter.

There may finally be a scandal engulfing the Obama administration that even Democrats and their media collaborators can’t obfuscate. What...