(Mark Hemingway)  A new poll suggests that finding employment, particularly for the long-term unemployed, continues to be a struggle for Americans. The poll, conducted by Harris Poll on behalf of Express Employment Professionals, asked questions of 1,500 unemployed adult Americans last month. 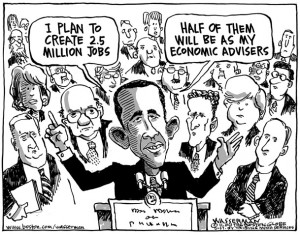 “This survey shows that millions of Americans are at risk of falling into the trap of prolonged unemployment, and it should give policymakers a greater sense of urgency to focus on the singular goal of creating jobs,” said Bob Funk, CEO of Express and a former Chairman of the Federal Reserve Bank of Kansas City, in a release. “We can take heart that in these difficult times the American spirit of confident hopefulness endures, but we can’t accept this status quo—not for our country, not for our unemployed neighbors.”

Some of the key findings:

Nevertheless, 91 percent agree with the statement, “I’m hopeful that I will find a job I really want in the next six months.”

Additionally, 46 percent of the unemployed respondents reported not having had any job interviews in the prior month and 23 percent report their last interview was in 2012. The poll also shows that a significant percentage of the unemployed are not currently receiving jobless benefits. Only 20 percent said they were currently receiving unemployment compensation. But among those receiving government assistance, the poll suggests the aid may be diminishing their incentive to find employment:

However, in a response that raises issues about whether unemployment compensation should be extended or allowed to run out, 82 percent of those receiving benefits said if their unemployment compensation were to run out prior to their finding a job, they would “search harder and wider for a job.” Only 18 percent say they would “be in such despair that I will give up looking for work altogether.”

48 percent agree that they “haven’t had to look for work as hard” thanks to unemployment compensation.

The survey also shows that the unemployed are predominantly male—57 percent vs. 43 percent female—and also skew younger. More than half of all unemployed are under 40 and one third are under the age of 30. Finally, 45 percent of respondents say the economy is “most responsible” for them being out of work, 36 percent cite “themselves” as being responsible, and 18 percent blame the government for their lack of employment.

The full report can be viewed here.

Obama Lost the War on Al Qaeda, While Claiming to Have Won It

Last year Obama delivered his own “Mission Accomplished” speech at the National Defense University. Its broad theme was that the...