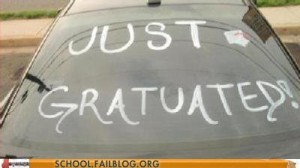 What a pleasure it is to finally have the opportunity to speak my mind about the monumental obstacles that await these young graduates. This once venerated Capital city of the Inland Empire has for the last few generations been a rough town to live in and even tougher to escape. And given the fact that it will be bankrupt for the foreseeable future and that the only light at the end of the tunnel seems to be a freight train, perhaps I should lay my cards on the table — since truth remains a dividend, even in an age that savors the bold-faced lie.

But first, the graduates.  I would so prefer to say that by looking into your beaming faces I detect a true sense of hope.  But since 80% of you are at this moment enthralled in that perpetual neurotic obsession with your cell phones taking “selfies,” I find myself again ignored and looking down on the tops of your heads – an irritating pose I had grown accustomed to seeing you display these last few years.  I have little doubt that your addiction to these devices, much like one who incessantly uses crack cocaine, has made you exponentially stupider than any class that has preceded you to this podium for their obligatory sheepskins.  In the classroom, I watched  you burst into tears as I  attempted to confiscate your infernal contraption  while I lectured and you fought with me, as if it was  your divine right to watch rap videos, girl fights, or to text your homie who had just hit the streets from lock-up.  A word of advice: any employer addled enough to hire you would fire you in a New York minute for 1/100th of the foolishness you pulled here, cupcakes.

For those, and you know who you are, who have been socially promoted to this semi-worthless diploma, I must tell you in all honesty that you are the functional illiterates of 2014.  Unless you find an employer who gives out positions for extreme mascara application or has a job open for you to play video games for money, the lion’s share of you are destined for a career of public assistance, menial labor, or getting your “salad tossed” at a correctional facility.  For those lucky enough to attend community college, a battery of remedial courses await that will attempt to teach you everything you should have learned here, should you awaken from your weed-induced fog.   Hopefully, there you will accustom yourself to the idea that life is not one big rave and that human intelligence is a precious thing to cultivate and pass on.  It sickens me to know that many of you cannot find France quickly on a map, conjugate the base verb “to be,” conduct the most rudimentary of calculations, or write a coherent paragraph about any topic more profound than some vacant reflection flowing from a debauched imagination.

For the great many of you Hispanic and African-American graduates, who readily place your short comings at the feet of white racism — and even call your instructors such for rightly evaluating your work and behavior, know this:  Despite everything the counselors told you here, the world will never be your oyster as long as you wear that hypocritical chip on your shoulder.  I have kept my mouth shut and watched in disgust as you denigrated each other with the epithet of “nigger’ one hundred times a day, and witnessed failure upon failure – despite a dozen district programs designed to make you more than you are. But as you have poured excrement on these attempts for an honest leg-up, I forecast for many of you a squalid lifetime of minimum wage jobs as you leave a long trail of equally hopeless bastard children in your wake.  Because you would not lay aside the race hatred of a failed leadership and stand on your own as individuals, many of you are doomed to relive the mistakes of your parent’s lives.  As now constituted, few of you will be accepted into the military because of this chronic lack of discipline and many will take the easy and dark roads leading to a  nowhere life of crime, despair, addiction, indolence and impoverishment on the periphery of happiness.  Indeed, you will fulfill your own prophecy of failure — not by way of the white man’s racist calculations, but through your own foolhardy actions that you have daily constructed — brick by brick.  This is rightly termed irony and you must wake up, lest you forever fall!

And now for the parents of these academic wrecks:   You were the template that your children used to mold themselves with; and they are for the most part your mirror image.  For those who made the sacrifice and put their shoulders to the plow, I thank you.  For those who abdicated their responsibility and produced litters of feral beasts to further terrorize and disrupt our classrooms and society, your penance will be required in perpetuity.  In denying your role in civilizing this generation, you have guaranteed that your children will remain as children and you will be visited with their problems well into your dotage.  As they bring their illegitimate brats for you to raise while they seek the pleasures of intoxication and serial partners, remember your role in this disaster.  As the wags say, “Karma is a bitch!”

And last but not least, you teachers, administrators, and support staff:  I can identify a good number of you who go beyond the bounds of your duty to remedy what appears to be a hopeless situation —that vain attempt to sweep the sand from the Sahara.  But so many more of you are brutally incompetent or have become the direst of cynics.  Rightly or wrongly, too many have given up, having fumbled what our community has handed off to you as so much squandered raw material.  Yes, I know that the elementary and middle schools have fallen down squarely on their asses and continue to advance simpletons and barbarians for you to work a miracle with. These neighborhood schools function haphazardly as job programs for what is, in truth, an intellectually and politically illiterate illegal immigrant population.   But let me be frank: There will be no miracle forthcoming.

The entire system of American education is reeling like a five alarm drunk and needs to be bulldozed under before it destroys this country irrevocably.  Special interests, a partisan political juggernaut and mountains of redistributed cash have created the most self-serving of oligarchies: guaranteeing a human product equipped for only the bare semblance of mediocrity. Until the entire rusting hulk is smashed into pieces and an accountable educational form can emerge out of its ashes, every class of graduates will be duller than the one preceding it.  Common Core will only produce the commonest of intellects.

But money and politics aside, the greatest travesty is this:  A child’s mind is by nature inquisitive and will soak up every lesson it is presented with, especially the unintended ones we unwittingly serve up to them.  The fact that we have created entities that cynically crush this natural hunger is proof that there is a profound institutional inertia that infects much of our K-12 education.  Blame it on the unions, the teachers, students, or the parents.  This pathology as it stands is undeniable.  As Nietzsche so pointedly remarked: “That which is falling should be pushed!”

Well that’s it.  The fact that you haven’t stormed the podium to crucify me on the goal posts is either proof that I speak the truth or that you are too lethargic to drum up a whiff of passion to argue the point.  I know that some of you grads are going to live successful and meaningful lives, brimming with devotion to family and service, and I want you to know that nothing I say tonight is meant to disparage your future accomplishments.  But for a great many of you who have been wasting your time and the public’s money — a hard rain’s gonna fall.  The Progressive elitists who run this bloated school district are cut from the same cloth as those who make the decisions that are dismantling America — piece by piece.  To your detriment, they are enacting policies that will soon make affordable: housing, food, energy and the Good Life a distant memory.  As you sit here grinning, what was left of California’s manufacturing sector is leaving for greener pastures and soon only a mass of public employees, retirees, millions of illegals, and a beleaguered service industry will inhabit this once Golden State — along with those audacious liberals that made this rolling nightmare a reality.  Please remember this betrayal when and if you vote.

Because of this monumental exodus of talent, economic clout and human capital, the great majority of you will be doomed to toil in that dead-end service industry — chasing a failed American dream.  And if you think that a proposed fifteen dollar an hour wage is going to save you, then obviously you weren’t paying attention during my Civics class on the iron law of supply and demand.  When you awaken from tonight’s hangover, get a Cliff’s Notes version of any book by Dr. Thomas Sowell and educate yourself on what it means to be a productive American and how to short-circuit this horrid parasitical future that has been prepared for you by your political masters.  Good Luck Grads. From where I stand, you are certainly going to need it.

Glenn Fairman writes from Highland, Ca. He welcomes your correspondence at [email protected] and followed at www.stubbornthings.org and Twitter.

In Case You Missed It:  COVID THEATER: Turns out Biden's vaccine mandate for employers was a bluff; no idea when or if OSHA will ever issue rule
Posted in Freedoms.

The Future of Cars: Electric, Natural Gas, Driverless, and More

(Photo: Marcin Wichary) Ten years from now, electric (EV), hybrid and natural-gas powered cars will make some, albeit not yet...