By Daniel Greenfield    –Some counties have dictators, tyrants and kings. America has victims in high office. Victims with vast powers and great wealth who despite all that are oppressed by the people they rule. 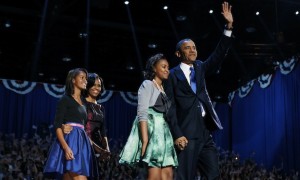 They are the oppressed oppressors.

Never has a ruling class been as oppressed as ours by an ignorant rabble that rudely abuses the army of benevolent public servants who see to their welfare in exchange for nothing except a feeling of moral satisfaction and a six-figure salary. Not to mention unlimited power.

“They talk about me like a dog,” Obama complained. “Is it a lack of respect for me?” he whined to the Secretary of Defense.

When Obama isn’t complaining, the media outlets of the ruling class do it for him. Every hour one of the greasy suckers on the tentacle of a massive media corporation with lavish skyscraper headquarters in four countries calls out the subliminal bigotry of the people who dare to criticize the man who controls every aspect of their lives.

The media has worked its iPads off alerting us to the perpetual victimization of the Obamas. From NBC to NPR, from CNN to CBS, from the New York Times to the Washington Post, the billion dollar corporations have spoken in one voice and they have said that criticizing the most powerful man in the world is racist. And they have told us that our ingratitude depresses him.

“The world seems to disappoint him,” David Remnick said. Remnick deftly balances the responsibilities of promoting Obama as editor of theNew Yorker (Advance Publications – $6.56 billion) and promoting Obama as author of “The Bridge: The Life and Rise of Barack Obama” (Bertelsmann – $22 billion).

Michelle Obama described the White House as a “nice prison” and compared her plight to that of a military wife. And who can blame her? One day the Obamas are just barely making do with a 1,701 person staff and then the sequester, that Obama proposed, kicks in and their staff is cut to a miserly 436.

The 16 assistants who help Michelle Obama perform her important duties of giving speeches and booking NBC sitcom appearances were cut so drastically that she was unable to even Tweet. Of the 90 people who clean up the family quarters of the power couple, only 15 remained.

And that went on for days.

For a term and change, the media has alerted us to the perpetual victimization of the Obamas. It has exposed the hidden racist motives of even their most innocuous critics. It has enlightened us to the many ways in which powerful politicians are oppressed by the people whom they are oppressing.

Oprah Winfrey ($2.9 billion) said that Obama was the victim of racism

Oprah Winfrey ($2.9 billion) said that Obama was the victim of racism. As proof she pointed to Congressman Joe Wilson calling Obama a liar… while Obama was lying. The interview was part of her promotional tour for The Butler ($176 million) which was also based on a series of lies.

It would take a racist to point out that the most powerful man in the world and one of the wealthiest women in the country were lying. Our oppressed ruling class deserves better than to have its political lies questioned and we should check our privilege for even considering it.

Oprah Winfrey went on to suggest that the only solution to racism was for “generations of people, older people” to just “die”. Sterling, who has a billion less than her, lost his team for much less than proposing age-based racial genocide. But Oprah, who says worse things in public interviews than Sterling said in private, has proposed buying his team.

Wealth redistribution isn’t for the poor. It’s for the poor billionaire member of the ruling class who coincidentally experiences a racist incident involving a European luxury goods store whenever she has a new movie to promote. It’s also for Kareem Abdul-Jabbar ($20 million) or Michael Jordan ($650 million) who complain about the racist country that made them so rich.

Our ruling class is being oppressed by those lower down on the ladder. Their pain emerges as heartfelt pleas for genocide and outrage over being held accountable for abusing their power.

Who can fail to sympathize with the most powerful men in the country demanding to know when anyone had ever been as oppressed as them by an occasional request for accountability?

The oppression of our ruling class knows no limits

The oppression of our ruling class knows no limits. After berating Holder for, again, refusing to provide documents linking Muslim groups close to his boss to Islamic terrorists, Congress (salary $174.000) dragged in Lois Lerner (salary $185,000), the IRS official in charge of suppressing populist threats to the victimized ruling class, and held her in contempt.

Fortunately the ruling class made it all but impossible to fire or prosecute her.

Congressman Jim Moran, a Democrat who has spent 20 years in Congress and his entire life in government, complained that he could hardly make ends meet on $174,000..

“The members of Congress are underpaid,” Moran said. “A lot of members can’t even afford to live decently in Washington.”

Sadly salaries remain frozen while the ruling class has to beg for bread in the gutter. Or cut dirty deals with lobbyists.

The oppression marches on with the investigation of Benghazi. The political outlets of the ruling class have already denounced the bizarre obsession with the administration’s lies about the murder of four Americans. And the harm it might cause to another of our victim rulers.

Before the Obamas were oppressed by the privilege of being the most powerful people in the world, the Clintons were stuck in that same plight. Twice.

Now Hillary Clinton is being persecuted for nothing more than championing a disastrous war in Libya that led to the rise of Al Qaeda and the murder of an ambassador due to a lack of basic security while her underlings were spending millions on art and mansion renovations.

After lying and blaming a video, and locking up the filmmaker, she courageously demanded to know, “What difference at this point does it make?”

To the ruling class it makes no difference. To the parents of her victims and the man she locked up, it might make a bit of a difference. And that’s the whole problem. Our oppressed ruling class, despite all it has done for this country, must occasionally still deal with whining from the families of those they kill or those they lock up for inappropriate speech.

If America were more like China, a wish that Obama expressed a few years ago, he wouldn’t have to put up with it.

Our victimized ruling class and their living Constitution

Our victimized ruling class and their living Constitution, which is slowly evolving to outlaw free speech and mandate universal diets, isn’t ready to reform this broken system which allows the rabble to upload YouTube videos that offend Muslims and demand investigations of public officials.

It’ll take another decade of outraged social media mobs, of the ruling class and funded by the ruling class, blowing up random politically incorrect comments into a national crisis to set the stage for liberating our ruling class from being oppressed by free speech.

Then we’ll be just like China only without the industry, jobs or rising middle class. And that means we’ll be more like North Korea.

Meanwhile mustachioed strategist David Axelrod accused Republicans of using Benghazi to bully Hillary Clinton out of being crowned as the most powerful person in the world.

How does one bully the wife of the formerly most powerful man in the world ($55 million) who has, despite the lack of a single tangible accomplishment, already been declared the inevitable nominee and winner of the next presidential election by Time and theNew York Times?

Time‘s cover, which showed a tiny candidate clinging to the heel of a gigantic Hillary, and the New York Times cover, which depicted Hillary as an entire planet, might be considered bullying other candidates out of the race. The more enlightened understand that another member of the oppressed ruling class and her media followers are exercising their prerogatives.

Our oppressed oppressors only oppress because, like Al Qaeda, the mugger on the street and the Jets, they are oppressed. If Hillary bullies, it’s because she’s a victim. If the rabble criticize her, then she’s twice the victim that she was before and entitled to bully twice as much.

The same goes for Obama and the rest of our victimized ruling class.

There’s a reason that every government agency has its own SWAT team and every billion dollar media outlet has three staffers whose job it is to call out the people for their bigotry and privilege. Some might call it the cynical abuse of power by a corrupt ruling class, but it’s just a case of the victims resisting the democratic oppression of the majority with its tendency to vote against the aggressive taxation and sexual peccadilloes that the ruling class feels that it is entitled to.

One day our oppressed ruling class will tire of our oppression and casting off its shackles will rise up against us, our voting booths and our constitutions. It will liberate itself of the last of our laws and enslave us so that our eternally oppressed oppressors may finally be free to do to us whatever they will.

Bus ads linking Islam with Nazism are circulating through Washington, DC - sparking a furious debate about the role of...