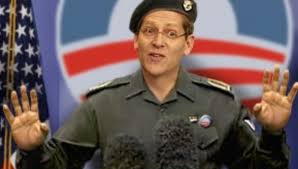 How difficult it had to have been for Jay Carney.  Even if one is a True Believer of the Progressive faith, the constant drumbeat of incompetence and scandal had to have been wearing on him—like a bulletproof vest that has been used too many times.

Even now, as he leaves the H.M.S. Titanic on a rowboat tour of the adjacent icebergs and the pressure of justifying the indefensible has been alleviated, he cannot rest.  Being America’s equivalent of “Baghdad Bob” carries with it a certain heaviness, since he knows where all the bodies are buried.  In Friday’s touching embrace, one could imagine Obama whispering sinister-like into his ear, “Open your mouth and you’re dead, dead, dead!”  It would have played well in some 1950’s noir drama.

Obama is hard on his underlings – like a pit bull is on a Chihuahua. He makes them say terrible things that no one believes and they are expected to hold a straight face afterwards and stifle the laugh or gag reflex.  Jay had a momentous task though and had to be admired – like Hercules’ labor of cleaning out the Augean Stables.  The only difference was, instead of shoveling dung, Carney was laying it down.

One wonders what Barry will do, having to, so late in the game, break in a new lad that is not used to what has to be the “Most Thankless Job in America,” except for Michelle’s couturier. For “The Mendacious One” it has to be fearful: like a tyrant watching his trusted food taster keel over after a bit of hummus: he was happy the guy was there to do his job, but wonders how good the next guy will be.

On a more cryptic note, it is said that Deputy Press Secretary Josh Earnest will be taking over the reins; and he has some mucky shoes to fill. Since “to josh’” is to fool someone or make things up and to be “earnest” is to be upright and truthful, we have a character here that is, at least nominally – false and true.  Such a mixture of prevarication and truth can serve a Press Secretary and his President quite well, thank you. I think he will fit in just fine……

In Case You Missed It:  YOUR LIFE OR YOUR JOB: Massachusetts state troopers are opting to resign rather than get COVID-19 vaccines
Posted in Freedoms.

Time for Democrats to panic over economy?

It has not been a pleasant week for Democrats who hope that a strengthening economy will help them overcome other...