Startling charts from the Republicans on the Senate Budget Committee about male participation in the labor force, particularly men between the ages of 25-54. 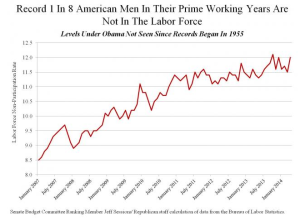 “There are currently 61.1 million American men in their prime working years, age 25–54. A staggering 1 in 8 such men are not in the labor force at all, meaning they are neither working nor looking for work. This is an all-time high dating back to when records were first kept in 1955. An additional 2.9 million men are in the labor force but not employed (i.e., they would work if they could find a job). A total of 10.2 million individuals in this cohort, therefore, are not holding jobs in the U.S. economy today. There are also nearly 3 million more men in this age group not working today than there were before the recession began,” the Republicans on the Senate Budget Committee claim.

Although defenders of the current economy attribute shrinking labor force participation to the increasing pace of retirement of the Baby Boomer generation, these new statistics above confirm a trend that Barron’s recently diagnosed: ‘The ratio of those over 55 in the workforce actually ticked up’—in other words, older Americans are being forced to return to work in a poor economy to make ends meet while many younger Americans simply aren’t working at all. In short, there is an unprecedented supply of working-age Americans who do not hold jobs.”

Why is Obama funding Terrorist?

The problem with writing a book about President Obama’s lawlessness, as I have just done in Faithless Execution (which will officially be...