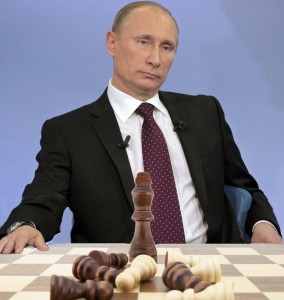 To put it in terms of a Chess analogy, imagine a Chess World Champion on one side of the Chess Board, and Putin on the other. Place your self in Putin’s shoes, or in Putin’s mind I should say. Your cunning adversary (who has never been defeated) has just placed one of his pieces in apparent danger. The novice would jump at the opportunity to capture it, but a Master would first ask himself; “Why is he sacrificing that piece? Is there some trick, some “next move” he is planning that I should be aware of?”

A brief history lesson is in order here. Back in 1979, when the Communist Soviet Union still existed, Chess Master Zbigniew Brzezinski also sacrificed a piece; the nation of Afghanistan. Through intrigue and murder, a CIA backed faction replaced a Soviet friendly Communist government with an America-friendly “Communist-light” government. After having previously refused Afghan requests for military intervention against the CIA backed “rebels”, Chess novice Leonid Brezhnev sent the Red Army into Afghanistan, in December of 1979.

Within a matter of days, Afghanistan was easily subdued. All of the major centers were Soviet occupied and the CIA’s disposable Afghan puppets fled the country like rats. But the Afghan War wasn’t over. It was only just beginning.

Unbeknown to Brezhnev, a secret guerrilla army, armed to the teeth with machine guns, rifles, communications systems, light artillery and, later on, shoulder fired missiles – was waiting for the Red Army. The USSR was drawn into a long (9 years!), costly, bloody, and internally destabilizing war against an international army of Islamic fanatics. The handlers and suppliers of this terrible forces were the Intelligence agencies of the US, the UK, and Saudi Arabia. In later years, Brzezinski himself, in an interview with a French newspaper, will confirm that it was his hand that orchestrated the Afghan War:

“According to the official version of history, CIA aid to the Mujahadeen began during 1980, that is to say, after the Soviet army invaded Afghanistan, 24 Dec 1979. But the reality, secretly guarded until now, is completely otherwise. Indeed, it was July 3, 1979 that President Carter signed the first directive for secret aid to the opponents of the pro-Soviet regime in Kabul. And that very day, I wrote a note to the president in which I explained to him that in my opinion this aid was going to induce a Soviet military intervention.”

As a former intelligence operative himself, Putin undoubtedly knows this bit of history, just as he undoubtedly knows that an invisible guerrilla army of ‘Right Sector’ thugs, CIA-Mossad snipers, and other assorted mercenaries are waiting for the Russians to come into their parlor. As with Afghanistan, the Russian Army would have little difficulty is securing the pro Russian regions of Eastern Ukraine. But that’s when the war would start, not end.

The moment that a Russian invasion occurs – the Western press, as it did in regard to the Afghanistan invasion of 1979 and the justified (and baited) German invasion of Poland in 1939 – would scream about “the new Hitler.” Prince Charles of England, that feckless and useless Royal parasite who likely murdered his beautiful and gracious ex-wife, has already started the Putin-Hitler drumbeat:

The Kiev gangsters are doing a pretty good job of destabilizing their own nation and embarrassing themselves. The combination of a costly Civil War, a nose-diving economy, and a cold winter with potential gas shut offs from Russia might serve to neutralize and collapse the Kiev beasts, without the need for an invasion; again, an invasion that the Brzezinski gang desperately wants.

NATO is in a predicament that Putin is brilliantly exploiting. The Globalists want to induce an invasion, but at the same time, if the Kiev puppets crack down too hard on Eastern Ukraine, domestic opinion as well as “world opinion” may shift in favor of the pro Russians. Unless and until there is the noisy cover of a Russian invasion, there can be no mass genocide of the East Ukrainians.

If the talented Mr. Putin can win this war without invading, he will be sparing more lives than will be lost during an invasion & occupation. Such a “Soft Power” victory would deal a seroius blow to the New World Order gangsters and expose them as “beatable” after all.

It’s still early in the Ukrainian Judo-Chess match, but so far, Putin is playing it very well.

In the meantime in Obama’s forthcoming trip to Europe to address the Ukrainian situation, Obama will try to build support for a “growing arsenal of financial weaponry” to be used against Russia, according to a report.

Medical Study: Don’t Trust All the Health Articles on Wikipedia