“It is nice to see that the world has become multipolar again after being monopolar for a number of years built around the US,” said Le Pen. Russia’s actions around the Ukrainian crisis returned multipolarity to the world, said the leader of the French ultra-right party “National Front” Marine Le Pen. 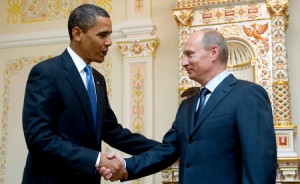 “It is a war of economic models: the ultra-liberal model that was imposed by the US on the rest of the world, and patriotic model built by Russia. It is nice to see that the world has become multipolar again after being monopolar for a number of years built around the US “, Le Pen said in an interview to the Russian television channel REN TV.

According to the politician, the remnants of such monopolarity forced Paris to take an anti-Russian position during the Ukrainian crisis, although hostile relations with Russia go against the interests of France. “The opposite position was chosen, because there is a strong dependence of European capitals from Washington,” she explained. The leader of the “National Front” has also blamed the outcome of the crisis on the new president of Ukraine Petr Poroshenko. She hoped that he would give up on intentions of resolving the conflict through military force, which is supported by the United States and followed by the European Union.

She said she supported the idea of federalization for Ukraine and accused the European Union of “pouring fuel on the fire” by offering partnership to a country half of whose population is looking eastward.

Europe is showing Russia in a bad light in order to please the United States, but instead of taking its cue from Washington, Europe should have its own opinion, Marine Le Pen remarked.

The Americans are seeking to expand their sphere of influence globally, especially in Europe, guided by their own interests, “not ours,” National Front leader said.

Marine Le Pen praised Russian President Vladimir Putin for “not allowing other countries to impose decisions on him” and for defending the “interests of Russia and the Russians”.

On May 25, Le Pen-led National Front, a fierce critic of the EU, won the majority of votes in the French election to the European Parliament, outdoing both the conservative Union for a Popular Movement and the ruling Socialists.

In her interview with Spiegel, Marine Le Pen called the EU an “anti-democratic monster”.

The European Union had been “stupidly waging Cold War on Russia” against its own interests, Marine Le Pen, an advocate of France’s withdrawal from the European Union, said in an interview with Austria’s Kurier newspaper. Maintaining good relations with such a country as Russia is the required minimum for the world, she said.

Leader of France’s rightwing National Front party has explained why she respects Russian President Vladimir Putin. “Mr. Putin is a patriot. His cares for his people’s sovereignty. He realizes that we are defending common values, the values of European civilization,” Maribe Le Pen said.

In Le Pen’s opinion, Putin probably doesn’t find enough courage, frankness and respect for ethnic identity and civilization in other political movements in France, except for National Front.

The way the Russian leader runs the country demonstrates his commitment to the values ??of society and the need to recognize these values, the French politician notes.

In March, National Front made its strongest showing yet in the municipal elections in France, winning the majority of seats in more than two dozen municipalities.

In Case You Missed It:  Sen. Schumer calls for REPLACEMENT of Americans who can’t have babies after mRNA depopulation jabs
Posted in Freedoms and tagged Europe, France, Russia, United Socialist States of America.