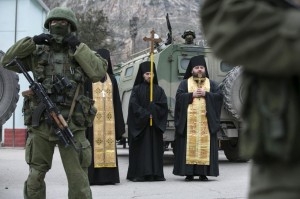 We, the Christians of Donetsk, Lugansk, Slavyansk and other cities and villages South-East of Ukraine, appeal to you to call for comprehensive aid and prayer support for our men, women and children that are dying under the bullets and bombs of Ukrainian Nazi Government executioners.

Every day brings tremendous death and grievous suffering to our land, every day the number of unarmed civilian casualties is growing. We are being mercilessly attacked by heavy artillery and mortars, our homes are being bombarded from the air and we are targeted by gunners and snipers who broke into our cities. Nazis of the so-called National Guard and the Right Sector behave in our land with no less brutally than fascist invaders during the Second World War.

One must recall the massacre of hundreds of unarmed people in Odessa’s Trade Union House on May 2nd, where along with lethal detonation of chemical weapons against the federalization supporters, they were additionally raped, killed, burned alive, hacked to pieces unarmed and were bludgeoned by swinging bats, even when the wounded jumped out of the windows to spare themselves from a fiery death. Many of them were women, children and elderly people. However, this most monstrously cruel example of mass murder in Europe since World War II did not stop there.There is an amazing callous and cynic mockery of the victims of the massacre, as well as of all those who died from the neo-Nazis hands today in the South – East continues in social networks. At the same time the truth about the Odessa’s “Khatyn” * and ongoing genocide is not only silenced in Ukrainian and Western media but also Nazis, those who are regularly shooting ambulances and the wounded, have the audacity to blame rebels who embarked on our defense!
Violating all international conventions on the rules of war, also divine and laws of the land, the punishes prohibited buses with children from evacuating the combat zone and force them to go back into direct attack from hellish continuous artillery and mortar shelling. These people who lost all conscience and trample upon all human norms, people that are difficult to call “humans”, denied humanitarian corridors of evacuation for the civilian population, which is another crime against humanity and a flagrant violation of international conventions on the conduct of hostilities. 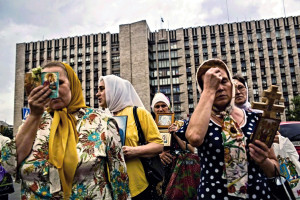 Executioners are confident in their impunity, and authorities in Kiev not only justify mass murders through their representatives, but also openly call for it. Leaders such as, Yarosh, Farion, Lyashko, Tyahnibok and many others repeatedly and publicity call for the destruction of people. Yulia Tymoshenko threatened to exterminate people in the South-East by usage of nuclear weapons (Thank you, Lord, that she does not have it!).

We appeal to all the living worldwide Christians, Catholics and representatives of all faiths – all believers in God, with a request to raise your voices and demand an immediate cessation of genocidal policy that was unleashed on our regions by authorities in Kiev. We plead for you to help us with comprehensive humanitarian aid – especially medicine, and your prayers for a cessation of bloodshed.

“Blessed are the peacemakers, for they shall be called sons of God” – says our Lord Jesus Christ in the Sermon on the Mount. Everyone, has a chance to become a son of God by referring to the power brokers of this world to influence authorities in Kiev to stop genocide of their own citizens, and by bringing the word of truth about what is happening in Ukraine and by praying for those who are killed every day by Ukrainian Nazis.

Save our children, our old men and women. It is in your power and that is what Christ the Savior encourages us to do; he, Christ, promises his Kingdom to those who give clothes to the naked, feed the hungry, visit the sick, and imprisoned, and to everyone who was merciful.

Be merciful and you will be rewarded!

Today, as never before, we need your compassion and care. We are referring specifically to you, the faithful, in the midst of an inhuman world, incapable, as we see, it to stop the unleashed carnage against us. Since we are not heard by the leaders of this world, you – the faithful people of the Earth – are our last hope.
With the belief that our words would not go unheard.

Christians of South-East of Ukraine.

The revelation that the Belgium police have now made an arrest in relation to the recent shooting at the Jewish...