The revelation that the Belgium police have now made an arrest in relation to the recent shooting at the Jewish museum in Brussels, and more significantly that the suspect is a Muslim radical who spent time fighting in Syria, confirms what many had suspected about that attack; that it was the work of Islamic militancy and the Jew-hatred that constitutes a core aspect of that ideology. When a similar shooting attack took place in 2012 at a Jewish school in Toulouse, much of the media initially attempted to speculate that this was the work of a far-right white supremacist. No doubt the liberal media was holding out for such a result this time too. But in both cases these attacks were the work of home-grown Islamic extremism. These acts may for the moment only concern a very small number of radicalized individuals, yet such individuals emerge from a much wider sub-culture of hate that Europe’s elites not only attempt to ignore, but that is even excused and legitimated by the prevailing narrative in Europe.

The suspect in question has been named as 29-year old French national Mehdi Nemmouche, who spent a year fighting with rebels in Syria. It’s not as if there haven’t been enough warnings about the dangers represented by the phenomenon of large numbers of European Muslims going to fight in Syria, but if European governments have proven incapable of preventing these individuals from making their way to Syria, then one also has to wonder how they were so easily able to slip back into Europe. Still, the case of the Toulouse shooting provides a noteworthy parallel. The gunman in that case, Mohammed Merah, had already spent time in Afghanistan and Pakistan and now it is widely believed that Merah’s sister Souad is also currently in Syria.

It is more than just a little revealing that so many of Europe’s Muslims are drawn to fight for Islamic causes in far off countries in the first place; there are an estimated 600 French Muslims fighting in Syria and almost as many from Britain. It is similarly telling that when these people return they not only continue to engage in acts of violence, but that their violence is directed toward Jews. Of course we shouldn’t ignore the violence against Jews coming from Muslims who haven’t first been radicalized via Syria or elsewhere; on the same day as the shooting in Brussels two French Jews were assaulted in Paris as they were leaving a synagogue. There is hardly space here to rehearse all the recent incidents from Europe of Muslims attacking Jews, but a European Union surveyfrom the fall exposed how in most European countries Muslims were by far the leading group responsible for anti-Semitic incidents, closely followed by individuals identified as being on the far left. 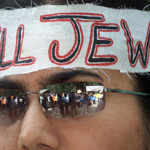 Europe’s elites have proven completely incapable of confronting and tackling this worsening phenomenon because they are incapacitated by a worldview that barely even allows them to openly acknowledge the problem. Most types of racism and bigotry in Europe have been swept away not by government legislation but by a culture of political correctness imposed by Europe’s media and cultural institutions that sets such views beyond the pale. Yet because that very doctrine of political correctness holds immigrant communities and particularly Muslims to be a victim group of the highest order, it has become impossible for Europeans to imagine that these people might themselves be the perpetrators of racism and bigotry. The model doesn’t allow for such a notion, especially not when the victims are Jews. Since Europeans perceive Jews as being white, Western, and affluent, that places them on the side of the oppressors and not among the oppressed.

Then there is the Israel factor. As much as critics of Israel like to stress that it’s Zionists and not Jews they take issue with, whenever Jews are attacked, liberals and liberal Europeans inevitably make the Israel connection and in so doing invalidate their own pretense that they view the two as being entirely separate. When Jewish children were mowed down by bullets as they made their way to school in Toulouse and the EU’s Foreign Policy Chief Catherine Ashton was obliged to concoct some words of sympathy, she stunned observers by using this event to note how, “we see what is happening in Gaza.” It seems that for people like Ashton, it is impossible to acknowledge Jewish victimhood without also footnoting Palestinian suffering, as if in some attempt to explain away whatever has just 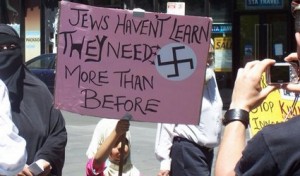 been done to the Jews in question.

European liberals delight in expressing horror and gleeful outrage at the sight of American Evangelical Christianity. They warn against reactionary Christian attitudes on any social issue that arises in their own country and they are always sure to castigate the Catholic Church whenever the opportunity presents itself (Pope Benedict’s visit to London was marred by large and angry protests). But if Europeans were really concerned about ultra-conservative religious extremism then they would act to prevent the proliferation of radical Islam in Europe. Similarly, if they were serious about ending racism then they would crack down on the only form of racism in Europe today that still kills people: Islamic Jew-hatred.

One of the principal narratives of the 2012 Obama re-election campaign — as in al Qaeda has been “decimated” and put on...