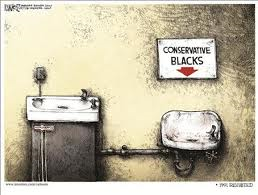 In the quarrel between Progressives and Conservatives, so many of the former believe that we are nostalgic for some Norman Rockwell rendering of an America that exists only as a furtive dream. Therefore, it is no surprise that the calculated meme of White Privilege should today be revived like some brainless zombie and sent to do battle with rational Conservative arguments. Having watched as every Progressive creed and thought experiment has crashed into flames when tested in the rarified oxygen of reality, the goblin of race is all their True Believers have left to fall back upon. Indeed, when one’s dogmatic project is crumbling into ashes, racism’s acrid reservoir of vitriol — stored in an anatomical region no higher than the human brain stem, must be called upon to assault the emotions and secrete that seething pity and self loathing that goes hand in hand with the Progressive’s worldview. When liberalism’s faux-rationality bled out on the field of decision, it became necessary to bare one’s claws and revert to tactics more primal. In taking shelter within the warm and bloody confines of tribal hatreds, every primordial sin of one’s enemy can be brought to bear and heaped upon their pyre of vengeful wrath. In the shadow of America’s Great Falling Away into Madness, the god of the Melanin Cult will be satiated by nothing less than civic alienation. And such viciousness fulfills the Marxian corollary of “Malevolence unto Power.”

Those who drink deeply from the waters of racial remembrance are cautioned never to forgive and to forever hold within the hollow of their hearts that paralysis of memory that justifies the emaciated soul – no matter how many racial set-asides, affirmative action positions, or educational programs and freebies are tossed up on the altar of expiation. But given the growing impetus towards White Self–flagellation for the ancient sins of distant forebears and a sleepless vigilance that had long ago extinguished the withered relic of de jure discrimination, how does one explain the fact that Black America’s material estate, by most indicators, seems all the more wretched under the watchful eye of the Progressive half-caste Prince?

Only now is this sobering epiphany filtering into the consciousness of Black America Central. Those who still have ears left to hear now understand that they have surrendered their political souls to ideological brigands and have been cheated and dishonored in the exchange. Intellectually honest Black Americans are discovering that the Democratic Party, in pushing its potent cocktail of divisive sugar-coated Marxian Kryptonite, serves as little more than a ham-fisted pimp extracting patronage in barter for coffers of pilfered booty. Moreover, the awakened are acknowledging the bitter repercussions of living as docile and obedient recipients of the Master’s largesse. In truth, those Blacks who have foolishly bought into the Progressive’s neo-narrative of White Privilege, and their “helplessness” against it, have acquired for their efforts little more than a rusted tin-roofed shack on the plantation’s parched “back forty.”

Nevertheless, the Left’s reductionist dependency on Identity Politics and tribalism could never tell the true story, and this is due to the growing phenomenon of Black Conservatism. This significant increase of vocal Black Conservatives proves that the Marxian/Progressive formula of “race equals thought” is merely the most recent in a long line of racist ideologies, and that the quality of the moral-political exists prior to the fevered ties of blood within the souls of intelligent beings. For the liberally inclined, the Black Conservative’s voice is deemed more dangerous than sparking Plutonium. It is a sign that their monolith is crumbling; and that in spite of the cacophony of Progressive precepts that lump humanity into molds preselected for them by elites, the truth is spilling out. Even though the MSM has strangled the “shriek in the night” of unbound Black Conservatism, they have turned to the internet: that underground railroad of heterodox thoughts, and are boldly declaiming Barack Obama’s nakedness from the rooftops. And as payment, they are branded as “house niggers” for their considerable efforts.

So if we look at the Progressive’s formulation more closely, the meme of White Privilege has less to do with racial solidarity and everything to do with the grisly world of smash mouth politics and who will wield the rods of power. If racial cohesion was the ruling value amongst Black Americans, then the Black Conservative would have been welcomed into the fold rather than branded as a traitorous Judas Goat. Racial warfare has always been used by the Left, with great effect, as a means to both divide and conquer. The art of stoking ethnic strife with the narrative of a Zero Sum America — where only the privileged few can have their day in the sun – has been honed to perfection as the Democrat’s trump card. And to be sure, a grasping paternalistic government would have it no other way. For those who find themselves in perpetual adolescence, a champion must come to the rescue. Black Conservatives can uniquely understand the expansive state’s patronizing cruelty and know that the most grievous of all sins is to psychologically hobble a man so that he will not stand on his own two feet. And for this reason, these apostates fleeing the creed of the “Black Basket Case” must be hounded, humiliated, and silenced.

The true Conservative, no matter what the shade of his skin, understands that there are riches greater than asserting ideological dominion over one’s fellow man or in demanding that he assent to the mantra of blood guilt — whereby a subspecies of humanity must wear the Mark of Cain for actions committed lifetimes ago. A Conservative understands that each man stands on his own merit and is not stamped with the imprint of the collective. A Conservative understands that he alone is accountable for the shape of his life, and so he reaps the reward of his labor or the retribution of his folly. In the heart of the Conservative, nothing as ephemeral as the abundance of pigmentation or a differential in hair texture can quell the first things of temporal and spiritual freedom that stir within the human heart. Conservatism’s great step forward has led men to search out their inner gifts and deficits. To overcome, one must look truth squarely in the face, even while holding oneself accountable to his fellow man and his God. In these darkest of American days, this is the message that Black Conservatives, and all who would abide by the movement’s noble principles, must evangelize to the dissatisfied, the disaffected, and the politically bewitched.

Black Conservatives are living evidence that liberalism’s fatalistic doctrines have failed and that the politically engineered race-baiting we are now encountering on the skirmish lines are the works of desperate men – such tactics are clearly the final refuge of political scoundrels. By now, everyone with twenty-three pairs of functioning chromosomes should know that cynicism and human wreckage are the dividends paid in exchange for liberalism’s Faustian power bargain with the Devil. And so, Racism continues apace in America – but now due to its strangely mutating character, it proceeds from the calloused grin of political panderers hocking their special vintage of honeyed poison that one drinks to his own annihilation. And thanks to these “compassionate handmaids of dream equity,” liberalism has made the resulting corpse look as if it were a suicide.

Glenn Fairman writes from Highland, Ca. He welcomes your civil correspondence at [email protected] and can be followed on www.stubbornthings.org and Twitter.

Presumed Innocent: Bergdahl ‘Can Testify or He Can Lawyer Up’

When he recovers sufficiently to return to the United States, Army Sgt. Bowe Bergdahl will be able to see his...