Obama foreign policy is failure after failure for US interests (perhaps not Obama’s interest), Libya in Chaos, Eastern Ukraine bombed daily, Obama supporting Al Queda in Syria. Thing are so bad in Iraq the U.S. Embassy in Baghdad is preparing contingency plans to evacuate its employees if necessary now that one of the deadliest Islamic militant groups in the region has taken control of large swaths of Iraq. 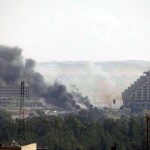 Coming less than 24 hours after the country’s second city Mosul was overrun by the militants, there were fears that the loss of Tikrit could open the way for an assault on Baghdad just 80 miles to the south.  Obama promised to responsibly end the war in Iraq and its turning into a terrorist controlled haven.

The stunning speed with which the rout has unfolded in northern Iraq has raised deep doubts about the capacity of U.S. -trained Iraqi security forces, and it has also kindled fears about the government’s grip on the capital itself. In the coming months Iraq government could be overthrown and the most radical terrorist will be in full control.  It not expected to end in Iraq, with an Obama pullout in Afghanistan, it will be next.

If the fighting reaches Baghdad, it is hard to see how a full-scale sectarian war can be avoided.

Tikrit, the capital of Salahuddin province, is 80 only miles north of Baghdad.

Iraqi state television today reported that its legislators would meet on Thursday.  Parliament speaker Osama al-Nujaifi, a Sunni from Mosul, called the rout ‘a disaster by any standard.’  Regaining Mosul poses a daunting challenge for the Shiite prime minister.

In Case You Missed It:  Far-Left MSNBC Host: Republicans Are Going to “Cheat” in the Midterms – “They Know Their Policies Are Trash” (VIDEO)
Posted in Terrorism, Tyranny and tagged al-Qaida, Iraq, Islam, Jihad, Obama, Terrorism, War.