HOUSTON, Texas—The outspoken National Border Patrol Council (NBPC) has taken their fight for agents patrolling the border to a new level: accusing the Obama Administration of placing the lives of the men and women of the U.S. Border Patrol in grave danger. Shawn Moran, Vice President of the NBPC, said that thousands upon thousands of illegal immigrants are overwhelming the capabilities of U.S. Border Patrol. He stated, “The Administration was already putting budgets before securing the border. Our jobs are immensely dangerous as we interrupt cartel activity on U.S. soil. 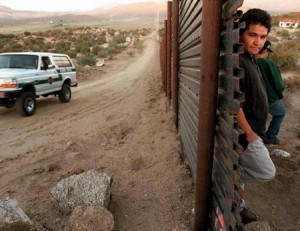 Their border security policy failures have already reduced the number of agents securing the border, and now they have fewer agents out there to back each other up.” He added, “The lives of Border Patrol agents should not be pawns in the political games of Washington, D.C. and this administration is literally risking our lives.”

Vice President Moran invoked the case of Robert Rosas, a Border Patrol agent who was ambushed by illegal immigrants in 2009 in Southern California. In that instance, Agent Rosas was dispatched alone to check on a sensor activation. Breitbart News has covered that issue extensively and revealed that one of the men involved had been on supervised release from U.S. authorities. The illegal immigrants wanted Agent Rosas’s night-vision equipment so they lured, trapped, and murdered him, according to the U.S. Attorney’s office. “A repeat occurrence of an incident like this is what we fear, especially now without full staffing in the field,” said Vice President Moran. “Our agents are often fathers and mothers and we accept that there are risks involved with our service, but what this administration is doing amplifies these risks. This is avoidable and unacceptable.”

Though Border Patrol are often heavily grouped in urban areas along the U.S./Mexico border, they are often alone in desolate rural areas–and most of the U.S./Mexico border is desolate. Breitbart News has extensively covered the conditions Border Patrol agents must work in, including the fact that many areas along the border do not have radio coverage for them to call for backup or help if they are injured and attacked. Vice President Moran said that the issues are made worse now that the influx is occurring in the Rio Grande valley Sector of Texas.

In Case You Missed It:  BREAKING: President Trump Announces NEW Information From ARIZONA: “It Is Damning And Determinative! Will Be Discussing This Today.”
Posted in Tyranny and tagged Border, Crime, Illegal Immigration, Immigration, Obama, United Socialist States of America.