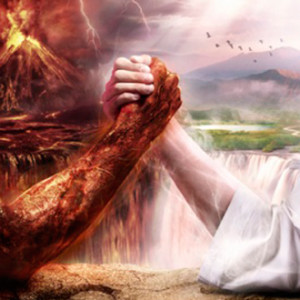 Augustine’s City of God, perhaps the greatest work of literature springing from the Latin tongue, offers us a treatise on the nature of human and heavenly government by positing two dichotomies: The City of God and The City of Man. Among its themes, Augustine contemplates man’s utopian dream of perfecting the earthly heaven. Man’s eternal quest of that shining City: managed to perfection by human art and science, founded on justice, and whose end is temporal peace, is indeed older than historical memory. Augustine sought to understand the relationship of Christianity and the fall of the Great City which had been sacked by the Visigoths in 410 A.D.  Contemplating the crumbling of the ancient world, the Bishop of Hippo drew a sharp distinction between the ends of the human and heavenly cities. Moreover, he bequeaths to us a religio-political legacy on what is possible in the theatres of carnal and spiritual life.

The City of Man is the product of human reason. Nevertheless, its existence is subject to the foibles of unredeemed humanity.  As long as man is dominated by the myopic avarice of his sin nature, the viciousness of: strife, envy, pride, jealousy violence, hatred, and the fruits of wanton self-interest will permeate the soul and the city. The city contains the collective spirit of men writ large, and as long as the internal war within men rages, we are doomed to an inheritance of faction and belligerence both in the psychological and global spheres. One need only have a cursory knowledge of human history to conclude that because of this soulish contamination of the will, the tale of our race is a tattered indictment of unmixed brutality. Hence, the dream of the City of Man was doomed to failure before it began.

It is only within the City of God that men can find rest: to live the existence for which they were created.  Such a condition, however, cannot exist until the curtain is drawn on this age and the blessed hope of redemption transforms the architecture of our souls and resets our nature back into its primordial harmony.  Only when humanity lays down its rebellious arms and accepts Christ’s reconciliation to the Father can this great chrysalis begin. Only then can the Great City of God fulfill the Father’s promise made before the foundations of the earth were set. The two loves that define and permeate both cities: the agape and the fervent love of the self cannot coexist- cannot stand together. One day, we shall discover that the City of Man and the earthbound architecture that sustained the vision will bow before the advent of the Great King. And what passed for cleverness or wisdom, no matter how esteemed we held it in our hearts, will become as a chaff in the wind.

Every attempt to establish the City of Man: from Nimrod and Nebuchadnezzar to Rousseau and Marx, has been doomed to the ash heap of history. Every utopian scheme, because it could not account for the fallen nature of humankind, has come to naught. Every revolution or founding that neglected humanity’s limitations of wisdom and moral knowledge, though conceived in earnest intent, unleashed the horrors of unrestrained human passions when its aims were fully realized. Even today, we find that nothing has changed.  Every antitheistic revolution and every socialist dream has failed in its aims and succeeded only in degrading an already depraved moral character. Inevitably, these quests for civilization end either with the sterile narcissism of material idolatry or with the destructive labor camps of devils like Stalin, Mao, Hitler, or Pol Pot. Like man himself, all empires come into being and pass away from it, either through calamity or with a tear and a whimper – even the best of them.

In our day, a renewed peril has appeared on our horizon: the murderous totalitarian system of bondage passing itself off as the False City of God. Islam seeks to impose its vision of submitted slavery through a campaign of concerted violence that would blanket the earth with its cruel ultimatum: convert or die. Conjured without love or grace, its end of “peace” is achieved through the extinction of human personality — coupled with its loveless yoke of bondage projected out from now unto infinity.

No effort of human will or art can fulfill the dream of the earthly City of Man.  No clever schemes birthed in self interest or redistributed material goods can repair the great divide that infects the spiritual DNA of the human soul. If humanity were to be magically granted a cornucopia of goods that freed them from the presumptive evil of material want, the city would still erupt in flames. This is because the unregenerate soul wants more, wants its own way, and will not rest from its prolonged suicidal expedition until it realizes what it innately hungers for: that missing puzzle part from our gaping wayward spirit- the love that can only be forged and fashioned legitimately in the City of God.

In Case You Missed It:  Do the people who rushed to get the COVID shot have buyer's remorse?
Posted in Freedoms.

Analyst: Fall Of Baghdad Would Make Current Gas Prices ‘Look Like A Bargain’