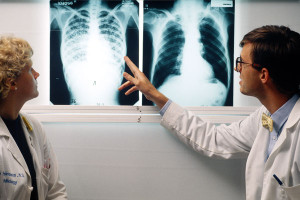 Illegal Aliens X-Ray on the Left is Positive for Tuberculosis

Health professionals are warning of a “humanitarian crisis” festering in Texas and Arizona as a result of unchecked border crossings of illegal-immigrant children into border communities.

Cramped conditions and the spread of difficult-to-treat diseases has doctors worried in the wake of a massive influx of children coming across the Mexican-U.S. border, many of them from Central and South America. Outbreaks of scabies, lice, dengue fever, tuberculosis and other diseases – many of them contagious – are already being documented among the children and in some border agents who work among them.

“President Obama’s non-enforcement immigration doctrine seemingly invites illegal border crossings, which brings with it a wave of illnesses and diseases that have long been stamped-out in America,” Rep. Phil Gingrey, R-Ga., told WND.

“There is a logistical nightmare these scarce diseases impose on the medical community,” he said. “The White House must stop neglecting the consequences of its reckless, open-border policies and protect the health and safety of our citizens – not to mention the security of our nation.”

As many as 80,000 children, many smuggled in by human traffickers without their parents, are expected to cross the southern U.S. border illegally in 2014, according to U.S. Border Patrol, and that could cost U.S. taxpayers up to $900 million. But if the flood of illegal border crossings seen over the past few months continues, the government may need to revise those estimates upward.

The Rio Grande Valley Sector of the Border Patrol has detained nearly 150,000 illegal immigrants, which puts the area on track to surpass last year’s total apprehensions of 154,453 just eight months into the current fiscal year, according to a report by KGBT Action 4 News, a CBS affiliate in the Rio Grande Valley of Texas.

Temporary holding centers have been set up by the U.S. Department of Health and Human Services in southwest Texas and in Arizona to deal with the influx of illegals.

The situation has grown so dire that the federal government has established temporary shelter for thousands of illegal immigrants, most of them children, at Lackland Air Base in San Antonio, Texas.

In Nogales, Arizona, thousands more have been packed into a makeshift holding center, a former warehouse, and were reportedly sickened by the food.

CBS News reports that the government is contracting with vendors to provide the children with nutritional meals, while the Federal Emergency Management Agency will offer counseling and recreational activities.

But whenever this many people are living in such close quarters, the probability of outbreaks of disease is dramatically increased, Gingrey said.

Of particular concern are tuberculosis, measles, dengue fever and chickenpox. But some rare cases of leprosy have even been reported in immigrants coming across the approximately 2,000-mile border with Mexico.

The Department of Homeland Security could not provide details on how many nurses or doctors are on site at the overcrowded detention centers.

A spokesman at the Rio Grande facility said agents do not check children for sicknesses and are only responsible for processing them.

“We don’t screen for diseases,” RGV Border Patrol spokesman Omar Zamora told Breitbart Texas. “All we are is a processing center, so we don’t do that.”

Spokespersons for the Centers for Disease Control and the Texas Department of State Health Services did not respond to WND’s request for comment Thursday.

The ABC 15 report from McAllen, Texas, said a scabies outbreak began more than a month ago, and now reports of various viruses are beginning to surface. Scabies is a contagious skin disease marked by a severe, painful rash.

Tuberculosis is an airborne communicable disease caused by bacteria that is spread from person to person. Symptoms include fever, night sweats, coughing, chest pains and weight loss.

The Department of Homeland Security has not allowed media access to the holding centers in Texas and has denied requests for interviews with doctors and nurses who are working in the centers.

The agency would only release the following statement:

“DHS has public health controls in place to minimize any possible health risks. Throughout the RGV Sector we are conducting public health screens on all incoming detainees to screen for any symptoms of contagious diseases of possible public health concern. U.S. Border Patrol has established Medical Units at its busiest border stations (McAllen, Weslaco and Ft. Brown) handling UAC. U.S. Coast Guard medical teams are assisting with the screening process, and providing healthcare evaluations for the sick and injured.

“Occupational health and safety guidance has been provided to for CBP personnel in the handling of subjects with signs of health-related symptoms. Our workforce has been provided and encouraged to use personal protective gear including latex or non-latex gloves, long-sleeve shirts, and to take precaution including frequent hand washing.”

Diseases can easily pass from one country to the next, according to Hidalgo County Health Department Director Eddie Olivarez in the southwest tip of Texas.

“Believe it or not, we also have illnesses that go from the U.S. south, so it’s very fluid both ways,” he told ValleyCentral.com.

A skin disease coming into the Rio Grande Valley concerns Chris Cabrera, a spokesman for the National Border Patrol Council.

He told Action 4 News that 10-25 percent of illegal immigrants have scabies, and now border agents are concerned for their own health.

“A lot of people (are) coming in with the disease, and it seems to be spreading, not just within the McAllen station, but throughout the Valley and to some of our agents,” he said.

Rep. Ruben Hinojosa, D-Texas, confirmed to a local TV station that he’s received complaints and has launched an investigation.

In a statement, he said, “I have made a formal request to the Department of Homeland Security (DHS) to investigate the reports of overcrowding and disease among the detainees at the McAllen Border Patrol facility.”

Right now Border Patrol is not confirming the percentage of detainees with scabies or whether any agents have contracted the disease.

Last week, photos leaked from a temporary detention facility in Texas showed hundreds of children crammed into holding rooms, without their parents, as Immigration and Customs Enforcement agents processed them.

After they’re fingerprinted and given case numbers, most are turned over to other government agencies or released outright to parents who have no legal documentation for being in the U.S.

“A public health crisis, the likes of which I have not seen in my lifetime, is looming,” she reported. “Hardest hit by exposures to these difficult-to-treat diseases will be elderly, children, immunosuppressed cancer-patients, patients with chronic lung disease or congestive heart failure. Drug-resistant tuberculosis is the most serious risk, but even diseases like measles can cause severe complications and death in older or immunocompromised patients.

“TB is highly contagious – you catch it anywhere around infected people: schools, malls, buses, etc. The drug-resistant TB now coming across our borders requires a complex, extremely expensive treatment regimen that has serious side effects and a low cure rate.”

Chagas, or “kissing bug” disease, caused by the parasite Trypanosoma cruzi, is carried by the triatomine bug that transmits disease to humans, Vliet reported. Although “kissing bugs” are already here, they are not as widespread as in Latin America. Right now, Chagas disease is uncommon in the U.S., so many doctors do not think to check for it.

Late last week, Texas public health officials confirmed a new wave of dengue fever has cropped up in the southernmost tip of Texas, marking the first outbreak the state has seen since 2005, according to reports in the Scientific American. Texas public health officials announced that the same area that saw an outbreak almost a decade ago now has 18 confirmed cases of the disease. Seven are believed to have been locally acquired (rather than contracted when traveling to a dengue-endemic region), according to the Texas Department of State Health Services. The dengue outbreak in southern Texas’s Cameron County and neighboring Hidalgo County comes after there had been an uptick in cases directly across the Texas-Mexico border in Tamaulipas over the last couple of months.

The border area of Texas has also seen an uptick in the number of dengue fever cases since late last year. In the last decade, Cameron County, Texas, has seen 27 cases, so the 14 occurrences in that county over the past few weeks is significantly higher than normal, according to reports from Texas public health officials.

South Texas has a greater incidence of infectious diseases such as tuberculosis, listeriosis and dengue fever than other parts of the state. The border area, with large population centers and multiple border crossings, make the prevalence of TB higher than in other regions of the state or the country, according to the CDC.

South Texas had a higher rate of active TB disease during 2001-05, with 8.6 persons per 100,000 population, than the rest of the state, according to CDC statistics. Of the 13 Texas counties with the highest incidence of TB, seven are located in South Texas. These counties have more than twice the state average rate of TB. Webb County alone had a TB rate of 19 persons per 100,000 population in 2001-2005.

In an effort to address the high incidence of TB along the Texas-Mexico border, the Grupo Sin Fronteras TB Binational Project was established in 1995 by the commissioners of health for Texas and the Mexican state of Tamaulipas. The program provides medical consultations and education on the transmission, prevention and treatment of TB. Successes of the program include the identification of high rates of drug-resistant TB in Mexico.

In Case You Missed It:  “We Could Do Better At What She Does”– West Virginia Coal Miner Blasts Bette Midler
Posted in Tyranny and tagged Health And Human Services, Illegal Immigration, Obama.

The Treasure He Is Mining

Perhaps I will be misunderstood in this, but Conservative Christians run the risk of passing into idolatry when they hold...