By Kelly OConnell:  Much like DeQuincy’s autobiographical Confessions of an Opium Eater, a true Marxist is addicted to Revolution. Why? Because only through revolution can a liberal hope to overturn government enough to force his fellow citizens into embracing socialism. But why the desperate demand for all persons to acquiesce to communism? Because Marxism is a religion, and a violently missionary one at that. 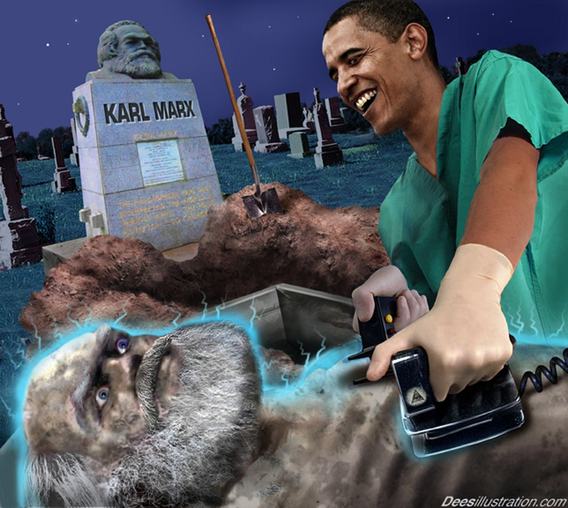 All history of Marxist movements proves this point. Further, Islam’s model of capitulate, or suffer, is a handy metaphor for leftism’s position. After all, no person should be allowed to live without suffering once the god has been rejected. Interestingly, madness and socialism have been the rule since Robert Owen’s 1825 New Harmony failed as the first socialist experiment.

Considering Barack’s rhetorical gifts, consider what his future would have held had he not stumbled into the snare of ideology. Given his talents of promotion and his historical moment, the Democrat party may have been able to build a permanent majority. Instead, Obama decided to worship directly his Marxist deity, scraping and bowing at the feet of his intellectual masters, and at every turn sabotaging America’s Democratic, Republican, and constitutional capitalist interests. Barack remains the Hawaiian Coleridge, fogged in the miasma of an intellectual opium den, madly clawing the Asiatic pipe for another blessed toke, continually chasing the dragon.

It is no accident that Engels stated, at Karl Marx’s graveside service,

For Marx was before all else a revolutionist. His real mission in life was to contribute, in one way or another, to the overthrow of capitalist society and of the state institutions which it had brought into being, to contribute to the liberation of the modern proletariat…

Today Americans, and indeed all Westerners, struggle to understand the historic lack of leadership and statesmanship, let alone simple competence, emanating from Washington DC. Is it really possible the continual train wreck is accidental? Further, is it mere happenstance that every policy debacle seems to weaken the US in similar ways? Or is it not as obvious as the meaning of a Hallmark birthday card that all Obama decisions are meant to drive America down the communist rat hole, from which there is no escape?!!

Buried somewhere in mankind’s deep past is the notion that humans must be forced into evolving. According to Melvin J. Lasky’s Utopia & Revolution, paradise was a destination long sought by the elites. For example, Christopher Columbus was convinced he had rediscovered the lost Paradise of the Garden of Eden on his voyages, at the Orinocco River, in modern day Venezuela. In fact, Columbus saw himself in messianic terms, chosen by God to spread the Gospel to the New World and help redeem the earth.

Lasky also describes how Italian abbot Joachim of Flora became a utopian model for many future leftists with his tripartite view of history. Flora believed that a future paradise was destined to be created by man on earth. Joachim’s vision, stripped of its religious pretensions, became the liberal goal for all future leftism, being the creation of paradise on earth. This helps explain how a religious sense came to haunt Marxism, especially as precursor Auguste Comte’s early socialist, scientific, humanist society designed as the Religion of Humanity, resembled nothing less than a godless Catholic Church.

What is the connection between Marxism and revolution? To put it bluntly, as the above Engel’s speech suggests, there is no possibility of Marxism without a revolution.

Karl Marx’s understanding of how history progressed was by revolution. He wrote in theCommunist Manifesto,

And he famously ended the Manifesto with this observation:

Let the ruling classes tremble at a Communistic revolution. The proletarians (wage-workers) have nothing to lose but their chains. They have a world to win. WORKING MEN OF ALL COUNTRIES, UNITE!

B. Writers on Marx & Revolution

Various writers, some very sympathetic to Marxism, note Marx was a dedicated revolutionary and not opposed to violence to achieve his ends. Fritz J. Raddatz, in Karl Marx, A Political Biography states, “Marx would not have been averse in principle to the use of weapons, revolt or terror…the use of force, in a revolution, was to him a matter of course.”

W.A. Suchting, in Marxism, An Introduction, points out Marx taught the concept of Permanent Revolution. Marx writes… “The worker’s battle cry must be: ‘The Revolution in Permanence.’

P.H. Vigor, in A Guide to Marxism, asks the question, Is a Revolution Essential? His answer:

And in Marx’s opinion the birthpangs of Communism could, and should, be shortened. And so, though there were one or two occasions when he said that Communism could be achieved without a Revolution, on the whole his writings support the view that a Revolution was essential.

Alfred G. Mere, in Marxism, The Unity of Theory and Practice, writes, “On the eve of the revolution, Marx, in his Theses on Feurebach, had bid goodbye to philosophy and intimated that revolutionary action was required to solve philosophical problems…”

Vladimir Lenin was the first communist revolutionary given the opportunity to translate Marx’s inchoate writings into an approach to human society. His 1917 revolution was victorious and he was forced to apply the Communist Manifesto, Das Kapital, and other highly ideological works into actual policies.

Lenin was an angry child, who grew into a furious adult after the government executed his brother. In the book, Lenin: The Compulsive Revolutionary, Stefan Possony describes Lenin’s essential lawlessness, writing, “His immorality and even criminality are starkly etched…” In fact, Marxism is also a quintessentially lawless, immoral and criminal movement. This is because the very idea behind Marxism is the rightness of overturning all authority, confiscating all property, eliminating all foes, and rebuilding society from the ground up. So it goes without saying that all rules and laws are deemed expendable in such a scheme.

Lenin was preoccupied, in fact, with violent revolution. The society of the future did not particularly interest him. He was infatuated with revolution as a purpose of struggle and conflict. Within this dedication, his chief interest centered on violence and the “black arts.”

Lenin did not shy away from extolling revolution, writing:

Marxists have never forgotten that violence will be an inevitable accompaniment of the collapse of capitalism on its full scale and of the birth of a socialist society. And this violence will cover a historical period, a whole era of wars of the most varied kinds: imperialist wars; civil wars within the country, the interweaving of the former with the latter; national wars; the emancipation of the nationalities crushed by the imperialists and by various combinations of imperialist powers which will inevitably form various alliances with each other in the era of vast state-capitalist and military trusts and syndicates. This is an era of tremendous collapses, of wholesale military decisions of a violent nature, of crises. It has already begun, we see it clearly—it is only the beginning.

Possony explains Lenin traits, some of which seeming similar to Barack’s character. Both wore a placid exterior which obscured an ideological and obdurate mindset. Lenin had an inflexible mind interested in few topics, constrained in a “mental straight jacket.” He had evolved into believing he was always right, and so he disliked skepticism and opposed open minds.

Lenin was prone to paranoia, and his prison time seems to have caused him to over-value his core ideas. This results in a monomania leading to confirmation bias, or seeing the entire world as only reinforcing the ideas. Lenin displayed psycho-pathological traits which led him to disregard the past or future, and just focus on the present. Possony describes Lenin as,

Self-righteous, rude, demanding, ruthless, despotic, formalistic, bureaucratic, disciplined, cunning, intolerant, stubborn, one-sided, suspicious, distant, asocial, cold-blooded, ambitious, purposive, vindictive, spiteful, a grudge-holder, and a coward…Lenin appeared to be unpretentious and soft-spoken. His enormous willpower was hidden behind a facade of modesty. His personality was basically cold, yet he gave the impression of warmth.

A. Barack’s Presidency of Leftism 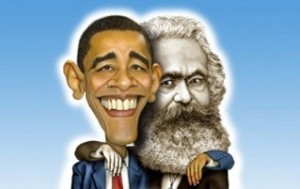 There is no doubt that what Barack is doing in 2014, and for his entire presidency is to foment Marxist revolution. There can be no other possible explanation of the various and collective nature of his malfeasance. The claim is that no person could be so bad as Barack, in terms of leadership, decision making, and always accidentally doing things that harm American interests. And since Barack cannot hide his leftist instincts anymore, especially given he won’t run again for election, we now see his fulsome progressive agenda hard at work.

But what is the essential Marxist view of revolution? Robert C. Tucker, in The Marxian Revolutionary

Classical Marxism projected the communist revolution as a universal phenomenon. The goal it foresaw for Weltgeschichte (world history) was a planetary communist society wherein man everywhere would realize his essential creative nature, having overcome by the socialization of private property the alienation endured in the course of history.

Further, the communist revolution was supposed to occur in the most advanced nations, and flash into existence globally, at the same time. This would sweep the globe with enlightenment and material progress. So anyone who believes in socialist and communist Marxism thinks they are fighting for a government revolution, leading to global transformation to liberate all humans. In this sense, Barack undoubtedly believes he is fighting to save the globe, and all humans.

If Obama could make major, permanent inroads in turning the globe Marxist, he would go down as the greatest hero of leftists. This is why so many believe he is a highly talented communist agent simply pretending to be a bumbling oaf.  For example, in his flooding of illegal immigrants into the US, the astute see a kind of Cloward Piven attempt to overwhelm the social welfare infrastructure.

What is sought for humans is for the creation of a global super organization, based upon a communist model, which becomes a haven for all persons. Such a world socialist sanctuary will become the paradise on earth that Joachim of Flora envisioned, and the new world order lamb shall wipe away every tear, is the hope of millions of neo-liberals.

Whereas it is commendable that the elites are seeking to better the world, it’s just unfortunate that Obama and his friends seem to have so little interest in logic, history, or common sense. And what is truly terrifying is the instinct of the world elites to create their earthly paradise in ignorance and opposition to God and His things.

Thinkers like Eric Voegelin found in this instinct the desire to commit deicide, or to murder God. The deep impulse is supposedly driven by the desire to wipe out sin and its penalties, but what happens when the One who can’t be killed finally arrives back on His earth to do an accounting? How much will matter the humanistic philosophies that built this modern day Tower of Babble?

If Russia gets its way the Space Station may soon be off-limits to the United States soon. For weeks now, there have...