Some Christian families from Mosul have sought refuge in St Matthew’s Monastery, writes Richard Spencer. Others vow to take a stand against the Islamists – whatever the cost. 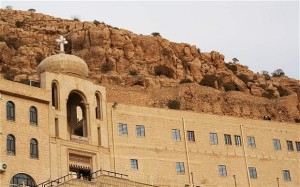 Captain Firaz Jacob knows he may well be mounting a last stand at the frontiers of the Christian settlement of Bartella on the outskirts of Mosul.

Less than a mile down the road are the jihadists of Isis, the Islamic State of Iraq and al-Sham, and the portly, middle-aged Mr Jacob is aware that his home-grown militia are outnumbered.

“I stand here waiting for my destiny,” he said, as he stood this week by the last check-point on the road to Mosul and the black flags waiting in the desert.

Speaking of why he and his men were refusing to give up and go, Capt Jacob said was determined to resist the jihadists and their allies, who last week over-ran most of the rest of northern Iraq.

“We will stay here despite everything,” he announced. “All these armed groups we have seen, but nevertheless we will remain. We love our Christian way of life, we love our churches and we love our community.”

Between the Sunni and Shia Arabs of Iraq lie a patchwork quilt of other ethnic groups and faiths, many of whom have been reconsidering their future in the most obvious possible way since the allied invasion a decade ago unleashed the sectarian militias and their death squads.

Anywhere between half and three quarters of Iraq’s Christians – Chaldean Catholics, Syriac Orthodox, and the rest – have left the country and the Middle East to start new lives abroad since 2003.

The town of Bartella, ten miles from Mosul, is largely Assyrian Orthodox, and its 16,000 citizens currently face a very vivid incarnation of an ever-present threat. They have been car-bombed at least twice in recent years, but this time their presumed adversaries have an army.

In Biblical times, the Assyrians were the imperial rulers of Ninevah, in which province Mosul still sits today.

According to the poet Byron, when the empire roused itself “The Assyrian came down like the wolf on the fold, And his cohorts were gleaming in purple and gold”.

This week Mr Jacob, a father-of-three wearing a small pistol tucked into his jeans, an over-tight T-shirt, and a pot belly, had a small band of 600 volunteers to help him. They were backed up by some Kurdish troops sent from the city of Erbil an hour’s drive away.

If the jihadists are to be believed, he has nothing to fear. Through its social media accounts, the alliance of Isis and former Baathists from the Saddam Hussein regime that now runs Mosul has assured the wider world that they have no quarrel with the Christian minority.

So long as they observe the new rules – Sharia, implemented strictly – their places of worship will be protected.

These are places of worship that go back thousands of years. The oldest extant church in the world, dated by its murals to the first half of the third century, is just over the border in Syria.

Monks from St Matthew’s Monastery near Bartella, where Christian families from Mosul have sought refuge, are thought to have helped translate Greek scientific and philosophical texts into Arabic for the eighth-century Caliphs of the Abbasid empire in Baghdad, an example of co-operation that seems remote today.

Bartella’s coadjutor bishop, Father Kyriakos Johanna, repeated perhaps more in hope than expectation the views of many Sunnis from Mosul, who claim that what happened there was a local uprising against the oppressive Shia rule of the Iraqi prime minister, Nouri al-Maliki, as much as an extremist Islamist takeover.

When Isis swept in last week, they did so on the back of public discontent with rule from Baghdad. Many Sunni Muslims say that they have as much – if not more – to fear from the jihadists as Christians yet still support the ejection of government troops.

“I understand that these people wanted freedom,” Fr Kyriakos said. “Freedom is everything, and the government pushed them to the edge.”

He said that, contrary to reports, there was no indication that churches in Mosul had been attacked by the insurgents or that Christians who remained had been threatened.

As did others, he pointed out that since the government left conditions had got easier for residents – there were no car bombs, and security walls that divided the city had been taken down. That is partly, of course, because those who set off the car bombs and made security walls necessary are now in charge.

The truth of these reassurances remains to be seen. In neighbouring Syria, when the jihadists arrived in the city of Raqqa, which they now completely control, residents also thought life was better for a while. Then they took over the two churches, tore down the crosses, and turned them into jihadi battalion recruiting stations.

In Mosul, there seemed to be little choice for the thousands of Christians who fled the city as the insurgents arrived, phoning each other in the early hours of the morning last week to alert each other to what was happening.

“There was some panic,” said Umm Saad, a housewife who had sought refuge with her husband, mother-in-law and three children, in St Matthew’s, high up on a mountainside overlooking the Plain of Ninevah.

“People were ringing round and telling each other what was happening. We left in what we had. We passed soldiers running, and throwing off their uniforms as they went. We looked back and saw Isis burning a military vehicle of some type.”

Hers is one of 20 families living for the time being in the monastery’s cells. Their dress – skirts, blouses and long, uncovered hair for the girls and women – and demeanour is a contrast to that of the Sunnis living under Islamist rule across large parts of Iraq and Syria.

Umm Saad said she and other Christian women would already wear the abaya – the long cloak and hood worn by women in the Gulf – when on the street, “otherwise there would be trouble”. Since the insurgents arrived, even if their forces of occupation are largely local Baathist remnants, they have posted rules for the implementation of their strict Sharia.

These demand that women should be covered and only go outside “if necessary”. Drugs, alcohol and cigarettes are banned, and all shrines, monuments and graveyards – seen as idolatrous in Salafi forms of Sunni Islam – will be destroyed.

When the jihadists arrived in the Syrian city of Raqqa, which they now completely control, residents also thought life was better for a while. Then they took over the two churches, tore down the crosses, and turned them into jihadi battalion recruiting stations.

“We had to leave,” Umm Saad’s husband, Manhal, said. “We don’t want to live in fear.” Other men said living was one thing, living as they wanted another.

In some ways, the question is why these people did not leave before.

Both of the couple had lost brothers-in-law to apparently sectarian murder, their sisters’ husbands shot dead in the shops where they worked, one in Baghdad in 2004, one in Mosul in 2008.

They talked of returning to Mosul when they had discovered “who these people really are”. But for all of these refugees, their real likely futures seem very different. Umm Saad’s widowed sister and their brother already live in Sweden, Manhal’s brother in Detroit.

As such, they are part of a wider exodus. While the decline of the Christian community began well before the fall of Saddam, it has been hastened since. The community’s natural association with the “crusading” invader made them natural targets for revenge, leaving aside other ideological motives.

Among the victims were the Chaldean Catholic Archbishop of Mosul, Paulos Faraj Rahho, who was found buried in a shallow grave in 2008, and Father Ragheed Aziz Ganni, also of Mosul, shot by the jihadists who stopped them on the road and demanded they convert to Islam.

Today, the remaining Christians are made up of Assyrians and Syriacs, Armenians and Arabs, practising variants of the Orthodox and Catholic faith, many worshipping in otherwise almost extinct languages such as Aramaic, the language of Christ, or Assyrian itself.

Andy Darmoo, an Assyrian who runs a London-based charity for Iraqi Christians, said he believed that of 800,000 to one million Christians in the country at the time of the allied invasion, no more than 200,000 remained.

Sweden, Germany, the United Kingdom and America are the favoured destinations: in some cases Western governments inadvertently and understandably assist the sectarian cleansing of the country, by making it easier for Christians to find refuge.

Some communities are re-establishing themselves inside the autonomous Kurdistan Regional Government area – assuming that this entity manages to hold off the insurgents’ advance.

Thaer, a kebab-shop owner in Bartella, has no plans yet to join his three cousins in America. Fr Kyriakos said he would never join his son in Munich.

The bravado is real enough. But the front line with Isis in the north of Iraq is now 600 miles long. That is a long line for the Kurds and a few hundred Christian militiamen to hold.

Why I support Israel, and Why You Should too