By Jerry McConnell   How many times are the so-called leaders of this country going to let the tinpot, phony imposter president use his fatal weapons to destroy our once world-leading nation?  I call on the people who can but WILL NOT lift a finger to bring a very beneficial solution to America’s unfavorable imbalance in the area of petroleum satisfaction. 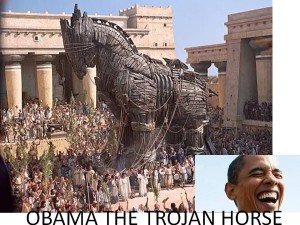 How many Congresspersons does it take to shine a favorable light on the benefits of approving the Keystone XL oil program between the States and our dearest friend internationally, Canada?  That country is handing us a sumptuous and overflowing dinner with all the trappings for a Bargain Basement price and the heathen Islamic loving traitor in OUR White House refuses to acknowledge or permit this graciousness to happen.

On Sunday, of all days, a day of rest and theocratic contemplation of goodness for the entire country, NewsMax.com published a shocking announcement from our good friends north of our border that disappointment with the Obama administration’s decision to delay approval of the Keystone XL pipeline, their government has approved the construction of a major pipeline to deliver oil to Asia.  (NewsMax.com online June 22, 2014)

NewsMax states in their online announcement that “The Northern Gateway project will run 732 miles from the oil sands in landlocked Alberta across British Columbia to a new marine terminal in the Pacific Coast town of Kitimat, according to global news agency AFP.

“It would transport about 525,000 barrels of oil daily for shipment across the Pacific to Asia, most likely to China.”

Is there any doubt in ANYONE’S mind that this new “monkey-wrench-in-the-works” decision by Canada will bring joy and celebrations to our anti-American Obama administration and enhance their ultimate goal of total destruction and annihilation of this pre-Obama world leader that is now our country of shame and defeatism, nearing a boundless cry of victory from the traitors in Washington, DC, both IN the White House and those OUT of that place but in our Capitol Building?

My question to those “so-called leaders” who act more like “bleeders” bent on the total elimination of our sovereignty, lock, stock, barrel and Constitution, is: “Why have you ALL turned your backs on the American people and joined with the anti-American elements of our society who populate and putrefy with a foul stench the last vestiges of humanity and world leadership for us?

Why are we allowing this to happen when Keystone XL can make us so overwhelmingly independent of the blood-sucking oil barons of the Middle East?  Is the clamor and call for destroying our less than 250-year-old government of fairness and future greatness so tantalizing and unavoidable just to placate a very small cabal of lawlessness and antipathy and, yes, traitors?

Good heavens, is not our once great land of promise of freedom and justice from tyranny worth saving, if for nothing else, our children?  Our forefathers who fought and sacrificed and shed their blood for justice from a dictatorial monarchy are probably groaning at the very strong possibility of a country of failure of leadership and slippage back to darkness and cold atmospheres.  Have we digressed that far in less than six measly years?

What ever happened to the iron-willed, strong-of-heart real honest-to-God REAL men and women that made this country great?  Have the “give-in-at-any-cost” wimps of socialism and degrading vicissitude changed that many minds from strong nationalism to a future of no country and no morals and no pride in one’s self?

It seems that way to me.  God help us.

By Alan Caruba : I know it’s a terrible thing to say, but sometimes I miss Saddam Hussein. Yes, he was a cruel...