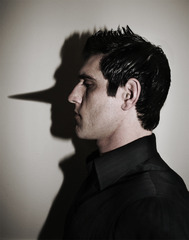 There is no question that the sin of bearing false witness, either during a trial or as a tawdry means to blacken the good name of another for personal gain, is reprehensible and counter to the harmony of the City.  The fact that this injustice is recognized as a grave affront to God carries with it an even more serious condemnation than mere criminal perjury, since what is false in man’s public square may be hidden, but what reverberates before the all-seeing court of The Most High is of an entirely different character.  Indeed, the very subversion or corruption achieved by speaking or affirming “the thing which is not” – either through commission or omission, reveals that naked depravity infecting our nature and our malignant propensity for self interest over what is good and just. Yet despite the gravity of this offense, if the frontiers of the 9th commandment stopped here, we might still escape much of its judgments relatively unscathed.

But like all God’s legislation that scours the recesses of the heart, we are not to be let off so easily. In its most expansive interpretation, the commandment binds our tongues to uttering the truth in all matters. As it is against His nature for God to lie, we who would be like Him and dwell within the light of his countenance must also affect a similar probity. And while holding our tongues hostage to an unwavering sincerity in our human dealings is perhaps more natural for some than for others, the proof of our redemption or damnation is ultimately evidenced in the familiar ease in which we speak true or weave that which is false.

If it is held that our God is the Father of Lights in whom no shadow abides, then conversely, our great adversary is the Father of Lies and has been so from the very beginning.  Given this, I should speculate that most of us, due to a natural propensity for self-preservation and a native capacity for: self-deception, pain avoidance, or a driving need to be deemed worthy in the eyes of others, wander in that  grey continuum between uttering crystalline truth and delivering the bold faced lie with abandon.

For those at the latter end of that spectrum who lack Heaven’s perspective, man’s cavalier flirtation with the truth can often be justified with a nimble apologetic.  Indeed, such men might reason that we are a race of bards who dabble in the colors of fantasy and fiction in an effortless narrative fashion; and as such, humanity is by nature congenially disposed to those who can tease the beauty from an oftentimes colorless and hateful world — even if history and fact are mauled in the process. We may shamelessly tell ourselves that we detest a falsehood that is malevolent in intention — rolling our eyes at the braggart whose aim is clearly self-exultation, while loving any sincere embellishment alloyed with a fact that might lead us to a greater truth down the road.  All too frequently, through the quality of human rationalization, we discover how effortlessly we can manipulate words to veil our squalid motives — so that even the blackest of lies can appear praiseworthy if done for the sake of love, country or the “greater good.”  Such is the diabolic power of the lie to destroy with a sugared kiss.

Moreover, since the New Philosophy has informed us that there are no longer any objective truths to be found in the world, we walk as a race on a moral balance beam – negotiating the abyss with scientific knowledge and secular explanatory myths that ascribe existential meaning to take the place of truth in modernity’s vacuum. In light of this new paradigm, we require a host of “noble lies:” such as those proposed in Plato’s’ “Myth of the Metals.” Secured through man’s “inventiveness,” it is reasoned that these lies, (whether they are rooted in “religion” or atheistic materialism) will supply society with its necessary cohesion by helping forge an artificial cult of brotherhood where there was once only a war of all against all   Brave New Utopians have always believed that their Earthly City can be founded for the sake of  “higher ends” – no matter how many eggs were scuttled in the process That fact that the dream erected on the back of the lie invariably fails is proof that some lessons are never to be learned on the human stage.

In the absence of truth, one no longer need speak the truth; and everything under the velvet canopy of night can then be called into question, since every sacred cow has gone to slaughter.  If we dare pursue Ariadne’s thread even further into the labyrinth, we may find that even the Commandments themselves have been relegated to the status of just another benevolent fantasy to legislate order to a once stiff-necked and lawless people. By rendering God’s truth as merely another clever fiction, we soon disappear into that maze as the thread becomes ash in our very hands.

Fortunately for the Christian, truth is not merely an inventive fancy. Though the temporal world: saturated in its pride, shoddy advertisements and hollow promises, might appeal to the palate of unredeemed men, such myths and artifices will be utterly consumed as chaff before the Sovereign Will that rules creation. For the Christian, the scriptures make plain the biblical imperative: only what is true – only what is holy is worthy to stand before the Great King. The Enduring City cannot be constructed on a fabrication, and so God will provide us with one. In describing the character of the New Jerusalem: that Eternal City prepared for God’s beloved at the End of Days, John the Revelator writes:

The city does not need the sun or the moon to shine on it, for the glory of God gives it light, and the Lamb is its lamp. 24 The nations will walk by its light, and the kings of the earth will bring their splendor into it. 25 On no day will its gates ever be shut, for there will be no night there. 26 The glory and honor of the nations will be brought into it. 27 Nothing impure will ever enter it, nor will anyone who does what is shameful or deceitful, but only those whose names are written in the Lamb’s book of life.

Lest any ambiguity about mendacity and the Kingdom of God remain unchallenged, the King James translation of Rev. 22:15 dispels all doubt about     Heaven’s toleration of liars:

Having been known in my day as a person who could spin a tale with the best of them, this verse always sets my teeth on edge. Most writers have a propensity for exaggeration, but I was always astounded at how easily the lie came to my lips. The fact that I now anguish over this “virtue” is perhaps the beginning of wisdom, as age overtakes me and I consider Lincoln’s admonition that “no man has a good enough memory to be a successful liar.” He who would command respect must practice the habit of truth telling, be it ever so painful and unglamorous.  In the end our integrity before God and our own consciences are all we will ever truly own – and these, friends, are words of sober truth.

Glenn Fairman writes from Highland, Ca. and welcomes your correspondence at [email protected] and may be followed at www.stubbornthings.org and on Twitter.

(FoxNews)  WASHINGTON –  A congressional hearing Friday into how the Internal Revenue Service lost thousands of emails from an ex-official...