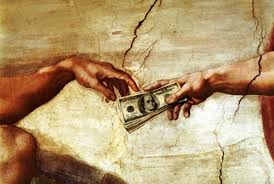 The belief that the raw mechanics of Capitalism, uninformed by any moral penumbra of ethics, religion or philosophy, has alone caused the great material increase of the West — is of itself suspect. Indeed, the Protestant Work Ethic, the idea of fair play, the conception of noblesse oblige, respect for contracts and law, the forbearance of pleasure for industriousness, thrift, moderation, Christian charity, and a host of other ideals and virtues, have invariably tinctured capitalism’s character for better or worse. In the West, we have found that human excellence in the moral sphere translates into economic vitality among healthy societies; and conversely, unravels on the world stage when that vision fails. In the Post Christian epoch, we can see this occurring before our eyes as America and the European Social Democracies purge their Christian essence in pursuit of a secular redefinition. As a result, a mad deification of human equality and homogeneity has come at the expense of liberty, holiness and what were once the predominant classical virtues. And this transformation has led the West to grope for reasons to be fruitful as a civilization and productive economically. Instead, both are succumbing to exhausted irrelevance – a slow and sterile death on the installment plan.

As we tread haphazardly into the darkness, it might be efficacious to consider one of philosophy’s eternal questions: What political and economic conditions are optimal for humanity, and how does our conception of God play a meaningful part in the Good Life? Personally, I believe that our natural capacities for reason, self-deception and creativity result in an oftentimes egregious justification for injustice that invariably arises from our inordinate pursuit of self-interest. This being so, prudence would seem to dictate that given the complexity of our “nature,” the careful establishment of limitations and the cultivation of a sense of humility ought to govern our politics. Since we have a propensity for conceptualizing utopias, but are in grave disagreement on how to bring them about, caution should reign. Few would anymore disagree that our founder’s vision of restrained government flows from the notion that fallen beings should not be imbued with unmixed power and that a system that holds men in check and accountable is salutary to freedom and happiness. This is why strong Christian based republics were for a time healthy, solvent and stable — before they lost the vision which decimated their virtues. And due to our unchanging profligate nature, what is decadent in the man is expressed in the City.

In truth, every regime is doomed to decay: no matter how strongly their economic superstructures appeal to us theoretically or through appearance. With the Capitalist form, it is the moral quality of its participant’s desires that inform the multitude of transactions within a liberal society. The overall character and the ramifications of these free choices will determine societal vigor or atrophy. Healthy societies tend to make healthy choices in the aggregate; and insomuch as they are consistent with nature or the Tao (C.S. Lewis’ euphemism for natural law) societies are said to be in ascendance. Collectivism decays and falls because it thwarts human desire, aspiration and quashes love. It is contrary to nature for goods and children to be held in common (Plato, Strauss). Conversely, the Cosmopolitan City (ruled by untamed desire) eventually fails because it forgets its founding virtues and becomes voluptuous in its taste for gadgets and luxury and waxes indolent in its love of ease.

The fact that Capitalism is more amenable and consistent with nature (even a fallen one) than the collectivist models has been a tonic good for America, since it spurred men to work and find grace in self-sufficiency. But as we now witness, once a people’s unified vision and aristocratic moral virtues unravel, we are left with the instability of democracy, (an inferior form according to Plato and Aristotle) whose slippery slope tendencies will soon deliver us to either an oligarchical or tyrannical endgame — perhaps in short order. Ultimately, there is something unsatisfying in all human economic models and humanity seems suspended between Scylla on one flank and Charybdis on the other. This dissatisfaction, nevertheless, arises from something deeper that unfulfilled material desire.

Once the West had jettisoned its ideal of self-sufficiency for the safety of the collective, (along with the personal restraints that gave our economic structure vitality and purpose), we were left with only an empty shell; and the term “hollow” best describes our current bastardized hybrid that reeks of corporatist fascism. Moreover, how are we to evaluate the “free market” system that exists in Russia or China: systems with values far different than once sustained Western life? Capitalism is still the best system that the temporal world has to offer man as he is thus constituted. That it corresponds to man’s self-interested (and fallen) instincts and harnesses them for the public good is fortunate. But naked self interest alone is insufficient to provide for the Good Life. Both laudable ethics and worthy institutions must coexist harmoniously with free markets for the unimpeded flow of trade and to insure the continuity necessary for such a vibrant evolutionary system to thrive. Indeed, a sense of trust and a common belief in justice must abide in society for transactions to be risked. Also, it is imperative in a modern world to have a disinterested state that serves as an arbiter of fair play, mediates the “rules of the road,” and adjudicates the complications of avarice that flow from the inordinate desire for wealth that Capitalism exquisitely arouses. And finally, one should never forget that Capitalism, though primarily a salutary institution, is founded on usury. And whether or not one believes that the biblical admonition against its existence should be disregarded, qualified or redefined, as a system it has the explosive potential to unleash both tremendous gains and significant pains as by-products of its undirected marriage of freedom and passion. One thing can be said about it for certain: it appeals to man’s acquisitive nature and can bring out both the best and the ugliest in our human drama. But such is the nature of all freedom.

As perhaps an addendum, this must also be kept in mind. The economies of the earth are posited on limited goods and services and all economics is an attempt to solve the problems related to scarcity and desire. The Economy of God, in a future redeemed earth, will feature no such deficiency and any inordinate yearning for material goods will one day cease as our psyches are healed. How ironic that paradise eventually emerges, not through the culmination of some historical process or as a function of a republic or herd, but through the authoritative power of a benevolent monarchy. Although we peek through a glass darkly now, one day we shall see and know clearly and face to face. The Economy of God is something we have never experienced before, except perhaps through the eyes of that first primordial pair. Nonetheless, it shall appear one day and be the source of a great human jubilation. As for me, I cherish that day’s approach.

Glenn Fairman writes from highland, Ca and welcomes your correspondence at [email protected]. He can be followed at www.stubbornthings.org and onTwitter.

In Case You Missed It:  PURE EVIL: The Lula da Silva regime in Brazil forcibly injects its political enemies with deadly covid “vaccines”
Posted in Freedoms.

Eternity Versus the Lie – Thoughts on the Ninth Commandment

There is no question that the sin of bearing false witness, either during a trial or as a tawdry...