The tax reform debate about the child tax credit (CTC) continues. Hopefully the discussion sheds light on whether the CTC expansion is the best policy. My purpose in writing has been 1) to point out that there is a trade-off: the bigger the CTC expansion, the less we can cut the more economically harmful taxes on work and investment and 2) to show that the basis for an expanded CTC needs more explanation. 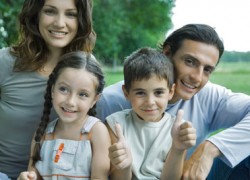 For those of you following at home, Robert Stein wrote about an expanded CTC here in “Room to Grow.” Heritage’s Steve Moore urged conservatives to stick to supply-side orthodoxy here. Ramesh Ponnuru responded to Moore here. Then I weighed in here. Then Ponnuru responded here. This is my reply.

First, the trade-offs. Ponnuru and I presumably agree that getting both pro-growth measures and an increased CTC would be better than the status quo. We are all pro-family and pro-growth. Sens. Mike Lee and Marco Rubio are working on a proposal that includes both kinds of tax reforms, and I look forward to seeing what they develop.

My point is that there is a trade-off. An expanded CTC returns more money to some taxpayers – a good thing. But that means to raise the same amount of revenue, we’d have to raise other taxes. The rates on work and investment likely would be higher than they would otherwise be under optimal tax reform. This is the trade-off I pointed out in Stein’s plan: “Stein acknowledges a larger child credit in all likelihood means higher-than-otherwise-necessary tax rates on income and investment.”

I didn’t say his plan raised rates in absolute terms. The rates may be lower than the status quo, but they are not low as they could be absent an expanded CTC – a point that Ponnuru acknowledges in the same paragraph (“you could design a tax reform that left the child credit unchanged, or even shrank it, in order to get that top income tax rate down even further.”)

Ponnuru asks what tax reform I have in mind and what evidence there is that it will lead to higher growth. Even the Joint Committee on Taxation (JCT), Congress’s official scorekeeper on tax policy, acknowledges tax reform can increase economic growth. JCT did an economic modeling of House Ways Means Committee Chairman Dave Camp’s tax reform proposal recently. That draft legislation included some reform elements that the conservative movement, Moore and others have championed for years (but could also be improved). The Tax Foundation has modeled pro-growth tax reform that increases GDP by double digits in just 10 years, let alone 20. There is huge growth potential with full expensing of capital and lower rates.

An expanded CTC could be so politically popular that it carries along more pro-growth reforms. And returning more money to taxpayers in the form of an expanded CTC would not be a bad thing. In fact it could be helpful politically. But it does not maximize economic growth.

Second, the reasoning for an expanded CTC is shaky. Stein’s stated reason is to offset “the disincentive to raise children caused by Social Security and Medicare.” The theory is that would-be parents do not need to have children to take care of them in retirement due to retirement programs. Let’s set aside the merits of government pension and old-age health care programs. The point is that for most of human history parents relied on their adult children to take care of them when they got old.

As a moral matter, this type of safety net is far preferable to a government one. Yuval Levin has written eloquently on dependency. We are all dependent on others at different parts of our lives and it is far better to be dependent on family and community than on government. I’d love to see a cultural return to children taking care of their parents. I am not sure why an expanded CTC will make that happen.

Our non-working years are now longer than ever. The change is physical and cultural, not merely financial. Social Security and Medicare are not the only programs encouraging this trend. Other innovations such as 401(k) programs, IRAs, and private pensions make modern retirement possible. All of these things may depress fertility. Current policy encourages several of these. If we are going to make up for the fertility loss caused by Social Security, what about that caused by 401(k)s?

And if we give couples a tax credit for having children, won’t that make them less likely to rely on their children for retirement? They’d have that much more in savings due to the expanded CTC. They would be more financially independent. Taken to its logical end, we could disallow all savings (or raise taxes higher) so that parents must rely on their children for retirement. Nobody favors that. We social conservatives may rightly lament a lack of dependency on family and civil society, but I am not convinced that throwing a few thousand dollars per year at couples is going to change that.

Neither Ponnuru nor I know how much an expanded CTC would increase birthrates. Ponnuru talks about the gap between how many kids people desire versus how many they choose to have. More research should be done in this area. What part of the gap is financial? What part is physical or age–related? We are waiting longer to have children these days. What part is related to career concerns and putting children in affordable child-care? Parents have children for all kinds of reasons, and financial inducements don’t seem to work very well where they’ve been tried, even in places with an “ideal” versus “reality” gap. I would love to be proved wrong; I think low fertility is a challenge. The evidence just is not there yet.

I love raising children – I have four aged 10 and under. The decision whether to have children is not typically about money in our pocket. But even just considering economic factors, one’s own economic prospects and optimism matter. Pro-growth tax policy will grow the size of the economy, create more jobs, increase incomes, and spread prosperity. This will be great for middle-class families and all Americans.

I’m also not convinced that the expanded CTC will do much to increase fertility and it certainly will not be efficiently targeted. Other ideas in “Room to Grow” and at Heritage are more promising: decreasing the cost of college, for example. And what about state and local governments that are anti-development, driving up housing costs and making commutes to children-friendly suburbs a nightmare? Conservatives can address some of these government-abetted problems before resorting to an expanded CTC.

Ponnuru writes that I think the credits “risk unfairness to the childless.” But a credit is inherently “fair” to some and not others insofar as it will be given to only some. My point was that many taxpayers are paying for something or doing something that benefits society for which they are not compensated through the tax code. That’s not a bad thing. Tax codes should be simpler, not more complicated. We need not try to address every grievance and intergenerational unfairness in the tax code.

The expanded CTC, by contrast, is not designed to address any child penalty within the tax code (but instead the fertility effects from less intergenerational dependence derived from the existence of Social Security and Medicare). If I understand Stein correctly, he is saying it’s not so much the additional money parents are paying into Social Security today that depresses fertility, but the expectation that Uncle Sam will take care of them during retirement. An expanded CTC does not address the problem directly.

In making his case that we have to argue for what is best whether it is politically popular or not (wait, I thought I had that side of the argument?), he notes that “[m]ost conservatives don’t shy away from arguing for taxing capital gains at lower rates than ordinary income—something that looks to the untutored eye like a special break—and we are willing to make that argument because we think is correct.”

Actually, tax experts will tell you that income should be taxed only once and that any capital gains tax, just like a death tax, is taking income twice. The correct rate is zero. (We also tax corporate income twice: once in the form of profits and again as dividends to shareholders.) This highlights what the purpose of the tax code should be. We at Heritage believe that, as much as possible, we should tax income once at a flat rate and have only deductions and credits that make the code neutral.

This debate over the best form of tax relief is important. Earlier today, Dave Camp spoke at Heritage about the importance of dynamic analysis (acknowledging that some tax cuts have a supply-side effect) and tax reform. You can watch it here.

Gang of Muslims Assault And Stab Jews In Paris Library

The wave of anti-Semitic violence continues to rock French Jewry, as a gang of 20 attackers on Monday reportedly assaulted...