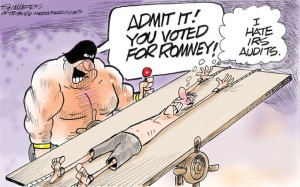 John Koskinen’s testimony before Congress on June 20, 2014, making no apologies for the loss of nearly two year’s worth of emails from Ex-IRS official Lois Lerner, who is at the center of the IRS scandal, was nothing short of appalling.

It  not only insulted the intelligence of millions of Americans who understand the difficulty of “losing” data in this age of technology, unless it is willfully destroyed, but the sheer arrogance in the way he sat there haughtily providing no answers and no apologies personified the very image of the IRS nearly every taxpayer experiences when we must provide detailed documentation about our personal affairs or face overbearing scrutiny from the IRS that seems to presume our guilt until we can prove our innocence.

Now the shoe is on the other foot, and Koskinen, head of the IRS, acts as if “losing” data is no big deal, as if it happens all the time and that we the people should accept this excuse and give the IRS a pass. If next April 15th, every taxpayer provided the same excuse for not paying their taxes to the IRS, would the IRS accept this excuse from us? No!…and neither should we accept it from them!!

The principle of innocent until proven guilty is a noble one reserved for private citizens, especially when accused by the government for some wrong doing, but it should not apply to government entities or official representatives of those entities when strong evidence suggests an abuse of government power.

If in the execution of their government job a Federal employee is accused of wrongdoing, based on viable evidence to support such a claim, that infringes on the liberty of Americans or violates any private citizen’s constitutionally protected rights; i.e., those rights enumerated in the Constitution, then either that employee produces the documentation to prove their innocence or they should be presumed guilty and prosecuted accordingly.

While taxpayers will most likely embrace the guilty until proven innocent principle for government officials, the legal system in America will not, which leaves the American people with very few alternatives.

The answer to this conundrum does not lie in the current apparent abuse of power; it lies in the amendment upon which the IRS derives its authority, the Sixteenth.

The Sixteenth Amendment, passed by Congress on July 9, 1909, and allegedly ratified on February 3, 1913, states, “The Congress shall have power to lay and collect taxes on incomes, from whatever source derived, without apportionment among the several States, and without regard to any census or enumeration.”

Notice the amendment is very specific about collecting income “without apportionment” and “without regard to any census or enumeration”. This is because in the 1895 Pollock v. Farmer’s Loan and Trust Company case,[1] Chief Justice Fuller gave the majority opinion for the Supreme Court and determined that a tax on income is a direct tax that is not proportional to the population as the Constitution requires and is therefore unconstitutional.[2] This opinion impeded the efforts of those advocating a direct tax, but it did not stop them.[3]

One of the only ways those who had an interest in implementing a direct tax could get around the apportionment and enumeration clauses in the Constitution was to change the Constitution through an amendment, which is exactly what happened.

If, in fact, the Sixteenth Amendment was actually ratified properly, it is a defective amendment, because it took away a check and balance of power and it gave unnecessary power to the national government that had, by 1913, already shown a propensity for abusing it.[5]

One of the first steps in restoring this stolen liberty to Americans is to either definitively prove the Sixteenth Amendment was not lawfully ratified, as Bill Benson[6] claims, or to demand its repeal similar to the Twenty-First Amendment, which repealed the Eighteenth Amendment on prohibition.

The implications of this are far reaching, it would fundamentally change how our government has been run for the last one hundred years and it would also restore freedom to the people of America by removing the authoritative, dictatorial and intrusive IRS from the necks of Americans.

Americans would once again be able to breath easily and spend more of their time in pursuit of their own happiness instead of worrying how they are going to afford to pay for the happiness of elected officials who believe they know better how to spend your money than you do.

In one fell swoop, we the people could not only abolish the IRS but the Federal Reserve as well and then restore constitutional taxation[7] and a constitutional money supply[8] where the value of our currency can no longer be stolen out of the pockets of the people by egregious politicians buying votes with taxpayer money.[9]

This measure requires the unity of the American people, in which this issue becomes a political third rail for any politician who opposes it. United, we the people, can overcome one hundred years of a corrupt revenue system designed to steal the fruits of your labors and by doing so we can restore liberty to the people of America.

In Case You Missed It:  New Strain of Multi-Drug Resistant Gonorrhea Detected in the US for the First Time
Posted in Tyranny and tagged Crime, Impeachment, IRS, White House.