By Keith Pounds:  Ongoing terrorist trends and tactics across the globe well prove that American schools are among the next big terrorist targets for attacks. 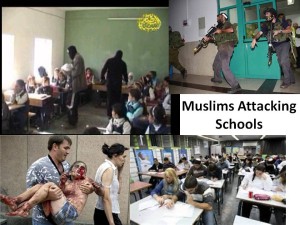 While U.S. school shootings are surely among the most tragic accounts of personal and family tragedy over the last 20 years, they may unfortunately only preface a grotesque reality facing students, teachers, administrators and parents in the United States.

Preaching a sermon just last week, Sudanese Muslim Cleric Muhammad Al-Jazouli gave a chilling warning against possible American airstrikes against ISIS (the Islamic State in Iraq and Syria). He warned that “if a single airplane flew over Iraq,” Muslim extremists were to attack Americans in their restaurants, coffee shops, workplaces and – perhaps most shocking- in their universities and schools.

Just as bold was the call from Muslim Imam Shaker Elsaed in Jan. 2013 – speaking to Ethiopian Muslims at T.C. Williams High School in Alexandria. Va. – for Muslims in America to “wage Jihad” on American citizens.

Additionally, they know that both our schools and law enforcement are wholly unprepared for a terrorist attack. They see that a single, lone shooter can create havoc among us, and know that an attack involving 5-10 terrorists on a public school with over 1,000 defenseless students and teachers would create a massive media event.

Several terrorist groups have not only warned us of their intent to attack U.S. schools, they have provided us with the tactics they intend to use.

Groups like the Chechens and Boko Haram have conducted attacks on schools with large groups of attackers who were wholly unwilling to negotiate. Their intent has been to create mass casualties and kidnappings.

One of the most vulnerable targets may be school children on buses. Reports show that some 42% of all international terrorist attacks have targeted transportation systems. Among school attacks alone, 37% have been against school buses.

This horrific tactic is an attractive one for terrorists as it concentrates children in a confined space, with no means of escape.

School bus attacks are further attractive because they are often found in rural areas far away from police protection and response. A prominent tactic internationally has been for terrorists and militants to stop buses on a lone highway, kill all the passengers, and leave them to be discovered by passers-by hours later.

As bus drivers are notorious for “staying on schedule,” terrorists can successfully set up an attack knowing that the exact time a school bus will be in a certain area.

Even more horrific, a growing tactic among terrorists has been to conduct separate but simultaneous attacks on similar targets. Imagine terrorist attacks on four or five school buses in different parts of town, at the same time.

Of course, this should not be viewed as discriminatory against women, but rather a recognition that terrorists may seek the opportunity to recruit female teachers or administrators who are sympathetic to their cause (a tactic that terrorist have become very good at), or they can easily insert a female suicide bomber into a school.

One mistake our education systems have made is to think solely of protection for our children. For many terrorists, it is not the children they want to kill, it is the teachers. As Abubakar Shekau – leader of the Nigerian terrorist group Boko Haram – said in July 2013: “Teachers who teach western education? We will kill them! We will kill them in front of their students, and tell the students to henceforth study the Quran.”

According to lawsuits in the wake of the Twin Towers attacks, the courts found that New York Ports Authority and Twin Tower management and officials “knew or should have known” that the buildings were likely to be terrorist targets.

The threat of terrorist attacks against our schools is real. Both students and teachers in the class room are attractive – and easy – targets, as are children on school buses. These targets are accessible, will provide worldwide media attention, and a small group of 4-5 terrorists can hold off law enforcement response for hours, resulting in hundreds killed.

As a final thought, a list of relevant school attacks and tactics may prove the urgency of this issue:

In Case You Missed It:  “We Will Not Comply!” – Thousands March Against Covid Vaccine Mandates in NYC (VIDEO)
Posted in Terrorism and tagged hate crime, Islam, Jihad, Mosques, murder, Terrorism, United Socialist States of America.

Children caught crossing the border into the United States appear well coached as they willingly surrender themselves. The youngsters respond to questions from...