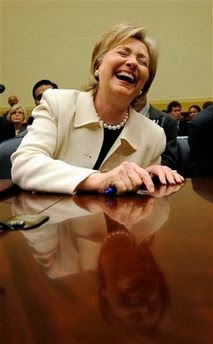 By John W. LillpopFrom the archives of days long since ended when free speech was still practiced openly, the late columnist William Safire started a political fire storm by accusing Hillary Clinton, at the time functioning as the self-anointed co-president of the United States, of being a “congenital liar.”As expected, Safire’s column did not set particularly well with then-President Bill Clinton, whom threatened to punch Safire on the nose, were if not for the fact that he (Bill Clinton, AKA Slick Willie) was the elected half of the manacled duo.Other Clintonistas rushed to Hillary’s defense by objecting to the word “congenital,” which means inherited or a medical condition existing at birth. Egged on by Hillary herself, defenders pointed out that Hillary’s estrangement from truth did not commence until after she was introduced to, and paired with, Slick Willie.Slick Willie called that a “damnable lie” and threatened to punch Hillary on the nose, were it not for the fact that it was Easter Sunday and he had an urgent appointment in the Oral Office with a chubby intern named Monica Lewinsky.This rancid page from American history springs up because  Hillary Clinton is now seen as a formidable candidate for the US presidency in 2016.With Hillary’s sights set so high, it is crucial that she  be fully vetted, a function normally carried out by the mainstream media, except when the candidate is a radical leftist Democrat and personal favorite of biased reporters and editors.As was the case of Barack Obama and just about everyone  running with a D affixed to his or her name.But more about Hillary.When it comes to veracity, or lack thereof, we must not  forget that, in the brutal street war waged for the Democrat presidential nomination in 2008, Hillary once boasted that she was made battle tough and ready for any 3 am call on the Red Phone— as a result of ducking sniper fire while on a mission in Bosnia for hubby President Clinton.Unfortunately for the “inevitability queen,” a CBS reporter, who had accompanied Hillary on her Bosnia trip in 1996, unearthed a clip of video that totally debunked her “dodging sniper fire” campaign rhetoric.As reported:“As has now been conclusively established by video film and news photographs, Hillary Clinton did NOT come under sniper fire in Bosnia in March 1996 when she made a morale-boosting visit to U.S. troops enforcing the 1995 Dayton Peace Agreement. But she is taking plenty of bullets for her over-dramatic accounts of the trip, and acknowledged on Monday that she had made a “misstatement.” She said it should be treated as a “minor blip.”From that same report, this, in part:“U.S. Air Force journalist Don Jackson was standing on the back of a flatbed pick-up truck filming the event when Clinton’s plane touched down. Here is his account: Mrs. Clinton arrived to a flight line full of well-wishers, both military and civilian, accompanied by her staff as well as comedian Sinbad and singer Sheryl Crow who were there to entertain troops. To set the record straight, there was no enemy fire, and no imminent danger. If there had been any danger, “well-wishers” would not have been allowed on the tarmac, much less allowing me to stand above everyone else on the back of a truck. And Sinbad and Sheryl Crow would’ve been running for their lives instead of taking the time to be interviewed by yours truly, on the tarmac. Mrs. Clinton’s [claim] is a lie, plain and simple.”Bottom line: When it comes to the raw truth, Hillary Clinton appears to be uniquely unqualified to critique anyone’s “reliability as a source of information!”In other words, as William Safire stated so succinctly and flawlessly, Hillary is a “Congenital Liar”.

In Case You Missed It:  The FDA protects the tobacco industry while pushing spike protein bioweapon jabs
Posted in Freedoms.

Consumer advocate and former presidential candidate Ralph Nader called for the end of the Export-Import Bank in an exclusive interview today...