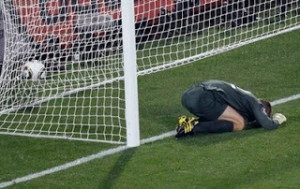 Adding to the image of World Cup soccer as a jocular assault on the manly virtue of competitive sports, Team USA had the dubious distinction of advancing in World Cup hostilities without so much as even scoring a goal in a well-deserved loss to Team Germany, whose ruffians only managed a single score themselves.

No dramatic late goals in this one. Not even a win. But despite a 1-0 loss to Germany, the United States was good enough to advance to the knockout stage of consecutive World Cups for the first time and good enough to hold onto the national attention that soccer has finally grabbed in America.

‘‘I’m getting e-mails from people who work at companies where the executives have called a three-hour break and put on giant screens,’’ US Soccer Federation president Sunil Gulati said. ‘‘All of this . . . is pretty extraordinary, and that will build for the next few days.’’

Mind you, as a red-blooded, patriotic, addicted sports nut, I naturally want the Americans to win!  ALWAYS!

After all, we ARE Number 1, despite the last six years of the leading from behind and surrender policies of  Barack Obama!

Overall, the performance by Team USA in Brazil is hugely embarrassing.

Indeed, ADVANCING without even scoring adds to the farcical nature of World Cup Soccer!

Just what is the bloody point of getting all exercised about  “advancing” when your guys have just been defeated in a bleeping  shutout?

Better to admit that soccer, World Cup included, is more suitable for communists and third-world heathens than for capitalistic, freedom-loving Americans who favor football and other respectable contact sports!

Besides, other than a few million goofy Germans who really gives a roaring freak if Germany has a better soccer team than the U.S.?

Let them have the World Cup, and all of its dubious glories.

We Americans prefer non-stop scoring mixed among the sights and sounds of broken bones and crushed skulls, standard fare on any given Sunday at any NFL game.

In Case You Missed It:  Under covid tyranny, US hospitals have become MURDER FACTORIES where ivermectin is forbidden because it saves lives
Posted in Freedoms.

by Daniel Greenfield : This is interesting not just because the contents provide proof that Obama did in fact set out to...