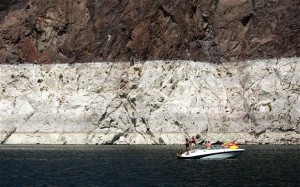 Lake Mead Water Level To 40 Year Lows…LAKE MEAD NRA, NV – JULY 30: Boaters are seen in front of a white “bathtub ring” on the rocks on the upstream side of the Hoover Dam Photo: GETTY IMAGES

Outside Las Vegas’s Bellagio hotel tourists gasp in amazement as fountains shoot 500ft into the air, performing a spectacular dance in time to the music of Frank Sinatra.

Gondolas ferry honeymooners around canals modelled on those of Venice, Roman-themed swimming pools stretch for acres, and thousands of sprinklers keep golf courses lush in the middle of the desert.

But, as with many things in Sin City, the apparently endless supply of water is an illusion. America’s most decadent destination has been engaged in a potentially catastrophic gamble with nature and now, 14 years into a devastating drought, it is on the verge of losing it all.

“The situation is as bad as you can imagine,” said Tim Barnett, a climate scientist at the Scripps Institution of Oceanography. “It’s just going to be screwed. And relatively quickly. Unless it can find a way to get more water from somewhere Las Vegas is out of business. Yet they’re still building, which is stupid.”

The crisis stems from the Las Vegas’s complete reliance on Lake Mead, America’s largest reservoir, which was created by the Hoover Dam in 1936 – after which it took six years to fill completely.

It is located 25 miles outside the city and supplies 90 per cent of its water. But over the last decade, as Las Vegas’s population has grown by 400,000 to two million, Lake Mead has slowly been drained of four trillion gallons of water and is now well under half full. Mr Barnett predicts it may be a “dead pool” that provides no water by about 2036.

The lake currently looks as if someone has removed a giant plug from it.

Around its edges a strip of bleached rock known locally as the “bath tub ring” towers like the White Cliffs of Dover, showing where the water level used to be. Pyramid-shaped mountains rise from the shallow waters.

Tying up his 15ft boat at the water’s edge Tom Merrit, 51, who has fished on the lake for years, pointed to the top of a faraway hill and said: “My boat used to be right up there. We’ve had to keep moving down and down as the water recedes.”

“That rock never used to be there,” he added, gesturing to a newly-emerging island several hundred feet long. “It’s really sad because this used to be a great lake. But if they don’t do something soon it’ll be gone.”

Lake Mead’s water level is currently at 1,087ft above sea level. There are two pipes, known as “straws”, that take water from it to Las Vegas.

The first extracts water at an elevation of 1,050ft and is likely to be sucking at air, rather than water, soon. The second straw is at 1,000ft.

Lake Mead is expected to fall another 20ft towards that critical point by the end of this year.

Beneath the ground a mammoth effort is already under way to complete a new, lower straw which will be able to draw the last of the water from the lake.

But it is a painfully slow process as a giant drill the size of two football pitches advances at a rate of one inch per day.

That rescue project is costing $817 million and is currently expected to be complete by late 2015, but it is not viewed as a long-term solution.

Las Vegas also wants to build a separate $15.5 billion pipeline that would pump 27 billion gallons of groundwater a year from an aquifer 260 miles away in rural Nevada.

But a judge has refused permission after environmentalists sued on the basis that it would adversely affect 5,500 acres of meadows, 33 miles of trout streams, and 130,000 acres of habitat used by sage grouse, mule deer, elk and pronghorn, an antelope-like creature that is endangered in the region. The court heard that 25 species of Great Basin springsnails would be pushed toward extinction.

Rob Mrowka, a Las Vegas-based scientist at the Centre for Biological Diversity, which brought the legal case against the pipeline, said: “It’s a really dumb-headed proposition. It would provide a false sense of security that there’s plenty of water and it would delay the inevitable decisions that have to be taken about water conservation and restricting growth.

“The drought is like a slow spreading cancer across the desert. It’s not like a tornado or a tsunami, bang. The effects are playing out over decades. And as the water situation becomes more dire we are going to start having to talk about the removal of people (from Las Vegas).”

Mr Mrowka cited Lake Las Vegas, a mega-resort where stars including Celine Dion live, as one of the “most egregious examples” of wasting water.

Las Vegas gets just four inches of rain in a good year, and in the first four months of 2014 there was just 0.31 of an inch.

The Southern Nevada Water Authority, which has the task of keeping the city from running dry, has described the effects of the drought as “every bit as serious as a Hurricane Katrina or a Superstorm Sandy”.

But spokesman JC Davis said water-hogging developments like Lake Las Vegas were “artifacts from an earlier time that wouldn’t be allowed today.”

He said: “The days of having things like a shopping centre lined with grass are over.”

Even environmentalists acknowledge that the glitzy hotels on the Las Vegas Strip have made big strides toward using water wisely.

The Strip now uses only seven per cent of the city’s water while accounting for 70 per cent of its economy.

All the water from sinks and showers in hotel rooms is recycled, and even water from some lavatories ends up treated and back in Lake Mead.

Some hotels automatically only wash bedroom linen once every two days, and restaurants have stopped serving glasses of water unless requested to do so.

While it may look extravagant the Bellagio fountain does not in fact use water from Lake Mead, instead being filled from an underground lake on the hotel’s land which is undrinkable anyway.

However, Las Vegas still uses 219 gallons of water per person per day, one of the highest figures in the US. In San Francisco the figure is just 49 gallons.

Most of that water is used to sprinkle golf courses, parks and lawns so the water authority has declared war on grass, paying homeowners to remove it from their gardens at the rate of $1.50 per square foot.

So far 165 million square feet of turf has been destroyed. Laid end to end in an 18-inch strip it would stretch 90 per cent of the way around the Earth.

“I’ve lost count of how much grass I’ve ripped up,” said Matt Baroudi, 53, an award-winning British landscape designer who moved to Las Vegas 15 years ago and installs eco-friendly gardens and back yards.

“Today I’ve just taken out a lawn that will save 20,000 gallons of water a year. People are changing but I think ultimately they will have to made it illegal to sell grass seeds.

“I go boating on Lake Mead and I’ve watched it dry up. It’s just astonishing. You see a rock poking out and then three weeks later it’s 15ft high. I don’t know what they are going to do.”

There is pressure on the neighbouring state of California to take pity on Las Vegas and give it water. But California is dealing with its own three-year drought, possibly its worst in half a millennium, which Governor Jerry Brown has described as “epochal”.

100 per cent of California is now classified as in “severe drought” and rivers are so low 27 million young migrating salmon are having to be taken to the ocean in trucks.

Nevada and California are just two of seven states that rely for water on the 1,450-mile Colorado River, which rises in the Rocky Mountains and used to empty into the Gulf of California in Mexico – but which now rarely reaches the sea, running dry before that.

In 1922 seven US states – California, Nevada, Arizona, Wyoming, Utah, Colorado and New Mexico – first divided up how much river water each could use, and the amounts have been bitterly contested ever since, including by Mexico, which also takes water from it.

One proposal is for landlocked Nevada to pay billions of dollars to build solar-powered desalination plants in the Pacific off Mexico, taking Mexico’s share of Colorado River water in exchange.

But Mr Mrowka said: “The Colorado is essentially a dying river. Ultimately, Las Vegas and our civilisation in the American South West is going to disappear, like the Indians did before us.”

In Case You Missed It:  COVID IS JUST THE EXCUSE: Governments to demand constant surveillance of your blood, body fluids and medication compliance
Posted in Freedoms and tagged Nevada.

By Doug Hagmann: It is evident that Potomac Fever that has been running rampant among the denizens of our halls of power...