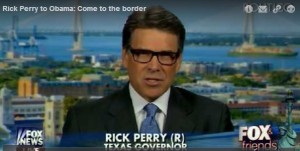 Texas Gov. Rick Perry said Wednesday that President Barack Obama must visit the Texas southern border to see the immigration crisis for himself.

“If he doesn’t come to the border, I think it’s a real reflection of his lack of concern of what’s really going on there,” Perry said on FOX News’ “FOX and Friends,” noting that Obama is planning to be in Texas next week for fundraisers.

“If the President of the United States is really serious about securing that border, we can show him how to do that,” Perry added. “But I haven’t even had a phone call from this president.”

Obama is scheduled to be in Austin and Dallas on Wednesday and Thursday for DNC fundraisers, according to The Monitor newspaper of McAllen, Tex.

Perry’s call for Obama to see the border crisis comes after what the governor said has been a clear “lack of focus” on securing Texas border for years. The humanitarian issue has come to the forefront recently after more than 52,000 unaccompanied minors and 39,000 adults with children have been apprehended trying to cross the U.S.-Mexico border illegally since October.

“The real issue, from my perspective, is this message that has come out of this administration for too many years that, ‘Come on up and cross the border and you can become a United States citizen;,” Perry said. “That has been, by their actions and probably by their rhetoric, a message that has been sent out.”
According to Perry, the approach of the Obama administration has caused him and others to lose trust in the president or others in Washington “to implement any policies that would deal with the issue of immigration.”

In Case You Missed It:  Did Roe just get effectively overturned?
Posted in Tyranny and tagged Border, Illegal Immigration, Obama, Texas.

Obama: ‘I’m Just Going to Make It Up As I Go Along’

(CNSNews.com) - The man dubbed the leader of the free world -- beset by foreign and domestic policy crises, sinking...