Advocates of pulling the plug on the Export-Import Bank are girding to resist what they see as a “blatantly partisan maneuver” in the Senate to save the agency. 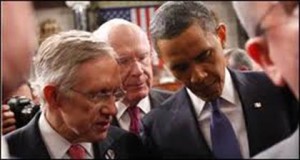 They’re talking about Sen. Chuck Schumer, D-N.Y., who promises the Senate will take up and pass a bill to reauthorize the 80-year-old bank before Congress leaves for its long August recess.

“I think that if we can pass it in the Senate, particularly with a good bipartisan majority … it will put pressure on the House,” Schumer said in a conference call Wednesday with reporters.

Schumer said Sen. Joe Manchin, D-W.V., likely will introduce a bill extending the charter of the Ex-Im Bank, which expires Sept. 30. The measure then would go to the Senate Banking Committee, where Chairman Tim Johnson, D-S.D., “wants to move the bill as quickly as possible,” Schumer said.

Commentary: Why We Must Get Rid of Export-Import Bank

The bank’s reauthorization is opposed by House Republicans led by Financial Services Chairman Jeb Hensarling of Texas. But Schumer and Sen. Heidi Heitkamp, D-N.D., who also participated in the call with reporters, said they were confident both the House and Senate would vote to save the agency.

“We believe the case is absolutely stellar for moving this in July,” Heitkamp said. “We also believe there are votes in the House, so hopefully that will happen.”

Conservatives in the House, along with groups such Americans for Prosperity and a coalition including Citizens Against Government Waste and Heritage Action for America, the lobbying arm of The Heritage Foundation, argue that the bank furthers corporate welfare and cronyism.

Proponents of the bank, which includes an alliance of Democrats, President Obama, the U.S. Chamber of Commerce, and the National Association of Manufacturers, insist that Ex-Im helps smaller businesses thrive despite the dominance of big business on a global scale.

Michael Grunwald, Time’s senior national correspondent, points to what he says is a flaw in the reasoning of Ex-Im backers:

This is the problem with arguments that the Ex-Im ‘supports’ about 200,000 jobs; most of those jobs would probably be supported without the Ex-Im. And while exports do help the economy, export subsidies distort the economy, reducing the cost of capital for well-connected companies while putting their competitors at an artificial disadvantage.

Senate Democrats made it clear they intend to use the Export-Import Bank to drive a wedge among Republicans, potentially creating a circular firing squad that will depress conservative turnout in November. Senate Republicans should reject Schumer’s blatantly partisan maneuvering and use it to fight for an agenda that promotes opportunity for all and preference for none. Conservatives should happily let the left stand alone as the party of well-connected elites and special interests.

Democrats, meanwhile, argue that the conservative opposition to Ex-Im stems from the rise of the tea party. Schumer said:

“All of a sudden our Republican colleagues, particularly in the House, frightened by a small group that has a lot of power, the tea party, has changed their point of view in a way that really hurts the country and hurts the middle class and hurts jobs.”

Diane Katz, a research fellow at The Heritage Foundation, countered Schumer’s argument in a commentary, saying the fight over Ex-Im mimics the battle cries of progressive movements:

The Ex-Im fight actually reflects a much wider public vexation with cronyism, whereby the federal government splits the spoils of political power with those wielding economic power. This anger does not belong to conservatives alone. Remember Occupy Wall Street? Ever hear Ralph Nader preach on corporate welfare?

In the past, reauthorization of the bank has been met with little resistance. But when its charter was last extended two years ago, Republicans opened the floor for debate. If Ex-Im doesn’t win reauthorization, it could be taken over by the Department of Treasury. Although the bank would be able to manage existing loans, it could not issue new ones.

Hensarling and like-minded conservatives indicate they have no plans to move a House bill to reauthorize the bank, thus allowing its charter to expire. However, the Senate, as Schumer indicated, will act first.

In recent years Americans have been feeling less satisfied with their amount of freedom. In fact, Gallup recently released a...