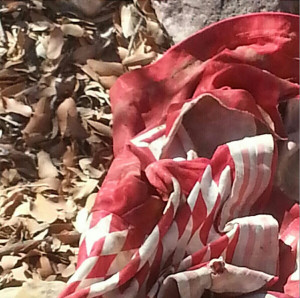 contractors on the ground believe is a Muslim prayer rug that was found near the border in Arizona last week.

A member of the security team said Monday night saying they were on patrol right along the border came down into a wash and the area were working in just south of Sierra Vista in Coronado national forest.

“That area is prime crossing from Yucca Springs over to Copper Canyon. And the reason that they use that area is anything from plain old Mexicans and South Americans to cartels and anybody else is because border patrol has a high point lookout area where in the Coronado national forest, tourists can come on up,” He said.

He added, “The border patrol parks up there with a surveillance vehicle that has cameras and flares on it. The problem is with flares, you can’t see down into washes. You can see people crossing the border, but the second they get into the washes, border patrol lose them. So, when they told us that, we decided we would patrol those areas by the washes.”

The group patrolled along the border that was a patchwork of decades old rickety fencing made from train tracks and cattle enclosures. Eventually, they were 50 yards  by the border and saw a break in the wash.

“That’s when I saw this thing laying around. And I was like, ‘What the hell is that?’ We walked over there and I didn’t really want to pull at it not knowing what was on it. I poked a bit at it with a stick and noticed some of the Arabic writing and was just like, ‘Oh boy.’ I snapped a couple of photos and then went on our patrol.”

The same contractor said  last week that six Special Interest Aliens (SIA’s) from Afghanistan, Iraq, and Yemen were picked up by U.S. border patrol near Laredo, Texas. Each one had 60,000 Iraqi Dinars ($51.00) apiece on them.

Human Events reported in 2010 that Iranian currency and prayer rugs were regularly found near the southern border. A November 2012 House Committee on Homeland Security report from the Oversight Sub-Committee that stated:

U.S. Government officials who are directly responsible for our national security continue to affirm the vulnerability. In August 2007 former Director of National Intelligence Mike McConnell stated that not only have terrorists used the Southwest border to enter the United States but that they will inevitably continue to do so as long as it is an available possibility. In a July 2012 hearing before the full U.S. House of Representatives Committee on Homeland Security, DHS Secretary Janet Napolitano confirmed that terrorists have crossed the Southwest border with the intent to harm the American people. Additionally, the U.S. Border Patrol regularly apprehends aliens from the 35 “special interest countries” designated by our intelligence community as countries that could export individuals that could bring harm to our country in the way of terrorism.” From Fiscal Years 2006 to 2011, there were 1,918 apprehensions of these special interest aliens at our Southwest border.

Government sources are concerned that the rise in illegals crossing the border is coinciding with the uptick of individuals with ties to terrorism who are entering the country along the U.S. southern border.

Texas Republican governor Rick Perry has repeatedly warned that the flood of illegal immigrants over the nation’s southern border includes individuals affiliated with terrorist organizations from all over the world.  In fact, the Jihadist group slamic State of Iraq and Syria (ISIS), which is in the midst of taking over large cities in Iraq, has already threatened to confront the United States on its on soil. 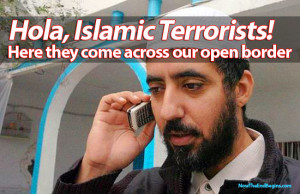 “Of course the way they would come to the United States would be through the porous border with Mexico. The drug cartels will bring people into the country no matter who they are — for money,” says Poe. “Everyone in the world knows that the border between the United States and Mexico is completely porous.”

Poe also said, “This jihadist group ISIS and it’s leader Abu Bakr al-Baghdadi have promised direct confrontation with America. He is looking forward to that day and he has said that publicly, we should believe him when he says that. These folks hate everything about the United States.”

U.S. border guards got a surprise in 2011 when they searched a Mexican BMW and found a hardline Muslim cleric – banned from France and Canada – curled up in the boot. Said Jaziri, who called for the death of a Danish cartoonist that drew pictures of the prophet Mohammed, was being smuggled into California

The 6 Lamest Excuses For Failure From The Obama Administration

Those are long running laugh lines in the comics and readers are supposed to roll their eyes as they hear...