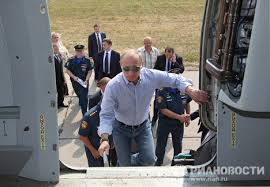 “I can say that Putin’s plane and the Malaysian Boeing intersected at the same point and the same echelon. That was close to Warsaw on 330-m echelon at the height of 10,100 meters. The presidential jet was there at 16:21 Moscow time and the Malaysian aircraft – 15:44 Moscow time,” a source told the news agency on condition of anonymity.

“The contours of the aircrafts are similar, linear dimensions are also very similar, as for the coloring, at a quite remote distance they are almost identical”, the source added.

Flight MH17 crashed in Ukraine on a flight from Amsterdam to Kuala Lumpar, and was carrying 295 people.

The passenger plane was expected to enter Russian airspace at 5:20pm local time, but never did, a Russian aviation industry source was cited by Reuters.

“The plane crashed 60km away from the border, the plane had an emergency beacon,” ITAR-TASS cited its source.

Early Thursday afternoon Eastern Time, news broke that a Malaysian Passenger Plane carrying 295 souls may have been shot down...