The current conflicts on Israel’s borders with Syria, Gaza and the Sinai make it essential that Israel Annexes the Gaza Strip, Gush Katif, the  Philadelphia Corridor and Judea and Samaria so that is has the imperative strategic depth to be able to defend itself properly in 21st modern century warfare, and in particular from short range and long range missiles and rockets, mortars, sophisticated armed drones, attack tunnels from enemy combatants and terrorists, and surprise hostile commando landings on Israel’s narrow strip of land. Annexing Area C in Judea and Samaria is of supreme importance because of the strategic value afforded there, and retaking the immensely vital Gush Katif Bloc in Gaza, which constitutes 12% of the Strip, and is a Monumental  Military Citadel which overlooks and controls this entire volatile and dangerous region of some two million Arabs. This is an Existential War Israel and Egypt are fighting, and the real enemy is #Iran who conducting Proxy Wars on both States 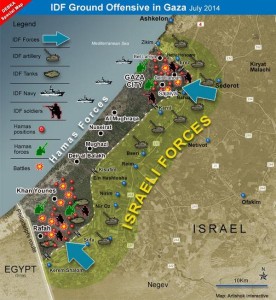 Egypt under President El Sisi is fighting a common enemy with Hamas who are the military wing of the Muslim Brotherhood, and other Iranian Terrorist proxies, and the Egyptian President would arguably not be adverse to Israel annexing the Gaza Strip, as Egypt is facing Existential Dangers from Al Queda, Muslim Brotherhood and Bedouin   Terrorists on its Libyan and Sinai Borders, and a Military Pact with Netanyahu and Israel would essentially be in the best National Security interests of Egypt and Israel, it should also be noted that Egypt and Israel already share a Peace Pact together which goes back many years.
The Legal Argument for Israel Annexing Gaza and Judea and Samaria can be forcefully argued that two the lands intrinsically belong to Israel both from the 1967 War and according to the Bible and Talmud Teachings. A modern day parallel can be drawn from Russia’s recent Annexation of Eastern Ukraine, and the Kurds Annexation of Northern Iraq.
Peter Paton is an International PR and Strategic Adviser

With June bringing the best jobs report since the recession began, one economist says the time is now to eliminate abject...