President Obama and the State Department’s “anti-diplomats” are fanning flames of anger against Russia after the shoot-down of Malaysia Airlines Flight 17 over Ukraine. But some U.S. intelligence analysts doubt the popular “blame-the-Russians” scenario before the investigation is complete, reality is it hasn’t even started. 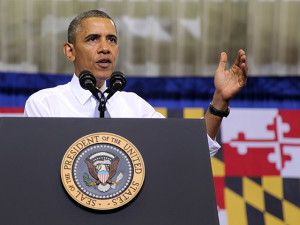 Despite doubts within the U.S. intelligence community, the Obama administration and the mainstream U.S. news media are charging off toward another rush to judgment blaming Ukrainian rebels and the Russian government for the shoot-down of a Malaysia Airlines plane, much as occurred last summer regarding a still-mysterious sarin gas attack in Syria.  This is the same Obama administration that quickly blamed the Benghazi attack on a youtube video.

In both cases, rather than let independent investigators sort out the facts, President Barack Obama’s ever-aggressive State Department and the major U.S. media simply accepted that the designated villains of those two crises – Bashar al-Assad in Syria and Russian President Vladimir Putin on Ukraine – were the guilty parties.

Regarding the shoot-down of the Malaysian jetliner on Thursday, CIA analysts cite U.S. satellite reconnaissance photos possibly suggesting that the anti-aircraft missile that brought down Flight 17 was fired by Ukrainian troops from a government battery, not by ethnic Russian rebels who have been resisting the regime in Kiev since elected President Viktor Yanukovych was overthrown on Feb. 22.

According to a source briefed on the tentative findings, the soldiers manning the battery appeared to be wearing Ukrainian uniforms and may have been drinking, since what looked like beer bottles were scattered around the site.  Reality is it just too soon to know either way.

Fact is that the separatists are not believed to have the expensive Buk anti-aircraft missile system or the trained personnel to operate it.

Another fact is that the separatists have no incentive to shoot down an airliner and neither does Russia. One would expect Trained personnel can tell the difference between low-flying attack aircraft and an airliner at 33,000 feet, that  excludes Russia being the perpetrator.

The Ukrainians do have Buk anti-aircraft missile systems, and a Buk battery was operational in the region and deployed at a site from which it could have fired a missile at the airliner, but only an investigation could confirm that.

These Buk missile systems are large and must be transported on trucks, it would be difficult to conceal their presence from U.S. aerial surveillance which has been concentrating intensely on the Ukraine-Russia border in recent months.

The Post also reported that “Rear Adm. John Kirby, the Pentagon press secretary, said defense officials could not point to specific evidence that an SA-11 surface-to-air missile system had been transported from Russia into eastern Ukraine.”

Could this downing be for purposes of war? In 2005, a memo was leaked from a January 2003 meeting between President George W. Bush and British Prime Minister Tony Blair during which Bush, “considered provoking a war with Saddam Hussein’s regime by flying a United States spyplane over Iraq bearing UN colours, enticing the Iraqis to take a shot at it.”

In light of the innumerable questions surrounding the flight path of Malaysian Airlines flight 17, which was ordered to fly lower by Ukrainian authorities and bizarrely chose to venture straight through the conflict zone that the previous ten airlines before it had avoided, history tells us that the stampede to blame Russian-backed rebels for yesterday’s tragedy may be somewhat hasty.

The larger point is that both the Obama administration and the U.S. press corps should stop this pattern of rushing to judgments. It’s as if they’re obsessed with waging “information warfare” – i.e., justifying hostilities toward some adversarial nation – rather than responsibly informing the American people and waiting for a proper and complete investigation before rushing to judgement and have another “this was caused by a  youtube video” incident happening.

In Case You Missed It:  Steve Bannon with Sebastian Gorka: Joe Biden Will Be Impeached and the 2020 Election Results in Wisconsin and Arizona Will Be Decertified
Posted in Tyranny and tagged Cold War, Jetliner, Obama, Russia, Ukraine, United Socialist States of America, Vladimir Putin.

Hiding Hamas’ Weapons at the UN

By Judi McLeod:  Things that shouldn’t be there have a way of turning up at the omnipresent installations of the world’s...