By Mitch Wolfe:  Canadian Prime Minister Harper dominates all western political leaders, in terms of his courageous advocacy of Israel’s right to defend itself with all necessary and justifiable force. 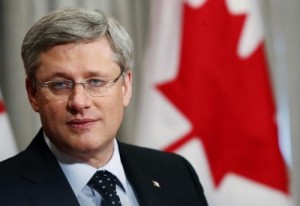 In this area, no western leader can match Harper’s eloquence, tough-mindedness and principled and articulate vocal opposition to Hamas’ terrorism.

And that unfortunately includes the hapless and sadly” missing in action” US President Obama.

In the wake of Israel’s bombing of Gazan missile installations, in reaction to hundreds of missiles being launched by Hamas at Israeli citizens, Harper recently publicly remarked that “self defense is not merely an Israeli right to be exercised in the abstract, but an Israeli obligation that must be defended by all Western nations.”

Harper further stated that “failure by the international community to condemn these reprehensible actions will encourage these terrorists to continue their appalling actions.’’

Harper, on behalf of Canada, called on its allies and partners to recognize that these terrorist acts [by Hamas] were unacceptable and that solidarity with Israel was the best way of stopping the conflict.

But then Obama called upon Prime Minister Netanyahu and demanded that Israel show restraint and press for a truce.

To which Harper called out the weak-kneed Obama and publicly rebuked him when Harper stated to the effect that ending the war does not require Israeli “restraint”.

Harper publicly scolded the feckless Obama, the UN and the “international community” for calling for Israeli restraint in the face of escalating rocket fire aimed at murdering and maiming Israeli civilians.

Harper called a spade and spade. He demanded that the world declare the sole responsibility for the violence belonged to the Hamas terrorists.

Harper argued that Hamas and Hamas alone was fully responsible for the current Israel-Hamas war.

Harper further asserted, “that Hamas was deliberately using human shields to further terror in the region.’’

Harper rejected outright calls coming from both the White House and the UN that Israel agree to a negotiated ceasefire with Hamas.

Harper insisted that not only should Israel not agree to a ceasefire, but Harper, said Israel should continue her offensive until the Iranian-backed terror group was “massively degraded,” if not eliminated entirely—once again arguing that “indiscriminate rocket attacks from Gaza on Israel are terrorist acts, for which there is no justification.”

Contrast those clear eyed and strong comments with the Obama Administration’s pathetic plea that both parties (Israel and Hamas) do all they can to protect civilians and mealy-mouthed observation that the US was heartbroken by the civilian death toll in Gaza.

How disgraceful and shameful!

With Obama and the international community in mind, Canadian Foreign Minister Baird drove home the point and said what Obama should have said.

“There is no moral equivalency between a democratic state and a terrorist organization” and  that “Hamas militants hiding within its civilian population is abominable.”

How the mighty have fallen. The United States used to be front and centre in the Middle East—leading from the front.

Harper’s principled and courageous defense of Israel, in contrast to Obama’s characteristically disengaged feeble approach, has demonstrated that the US under Obama is no longer even leading from behind (which logically makes no sense). But is pathetically cowering in the corner, hoping all the troubles in the Mideast will magically blow over all by themselves.

Eric Holder should be impeached now