By Jeff Crouere:  In a recent interview with ABC News, Attorney General Eric Holder spewed more racist nonsense. He claimed that some of his critics and the President’s critics were motivated by “racial animus.” 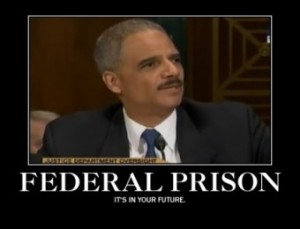 Using the race card is the last refuge for liberals who do not want to be held accountable for their poor performance.

Holder is a specialist at using the race card. He is constantly claiming that Republicans are trying to suppress minority votes with voter identification initiatives. Instead of being worried about voter fraud, he is more interested in filing lawsuits directed at states for taking action to protect the integrity of their voting process.

Back in 2009, Holder famously said that we are a “nation of cowards” on the race issue. He claimed Americans do not honestly and openly discuss racism. Thus, Holder has taken it upon himself to talk about the issue endlessly.

Instead of acknowledging legitimate disagreements on the issues, he cries racism. It is a tactic of a political scoundrel who always attempts to limit serious debate while de-legitimizing his opposition.

While Holder is a specialist at crying racism, he is completely negligent in doing his real job, leading the Department of Justice. Holder was AWOL during the investigation into the Black Panthers intimidating voters in Pennsylvania. No charges were filed in that case, even though there was shocking video evidence.

In contrast, Holder has been very aggressive in targeting Arizona and other states who are trying to deal with the massive influx of illegal immigrants.  According to Holder, these states cannot take action and must submit to this invasion and be held hostage to the federal government’s inaction on the crisis.

He has refused to cooperate with Congress in the investigation into the “Fast and Furious” gun running operation. He ignored their subpoenas for documents that Congress needed to complete their investigation.  As a result, Congress voted by an overwhelming margin to hold the Attorney General in contempt. Holder became the first Attorney General in history to be held in Contempt of Congress. Of course, Holder probably believes that Congress is filled with racists.

Holder uses the race issue to distract Americans from the job he is doing and the important things he is not doing. In recent weeks, the IRS scandal has intensified as Lois Lerner has refused to testify about her activities in targeting Tea Party groups. Congress learned that the computer hard drives of seven IRS employees supposedly crashed and were “recycled,” rendering key email records lost forever.

This unlikely development screams for an investigation by a Special Prosecutor who is independent and can examine this case to determine whether there has been any criminal wrongdoing. Not surprisingly, Holder has ignored calls for the appointment of a Special Prosecutor.

The House of Representatives has voted to hold Lerner in contempt. The next vote they schedule should be to impeach Eric Holder.

He has been derelict in his duty as Attorney General. Sadly, he has truly harmed the black community in this nation by his rhetoric about race. By constantly claiming racism, he dilutes the appropriate outrage that is needed when real racism is discovered.

Clearly, Eric Holder has also placed his relationship with Barack Obama ahead of his responsibility to the American people.

It is time for the worst Attorney General in our history to be removed from office. The only way that can occur is for Congress to act and act now.

President Obama and the State Department’s “anti-diplomats” are fanning flames of anger against Russia after the shoot-down of Malaysia Airlines Flight 17 over...