By Roger Aronoff :   The situation at America’s southern border is a “manufactured crisis,“one perpetuated—if not started—by the Obama administration. After all, the administration put out an ad in January 2014 asking for 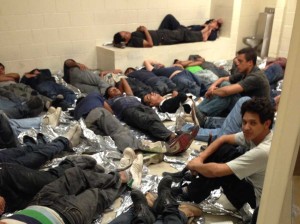 contractors to handle an influx of 65,000 children.

“The surge to 60,000 or so children seen this year was said to catch many off guard, especially since just 6,500 children entered the U.S. as early as 2011,” reported Pete Kasperowicz for The Blaze. “But [Republican Senator Jeff] Sessions [R-AL] said the advertisement showed that the administration knew the surge would happen.” And in reality, the 60,000 children represent only about 20 percent of the total illegal immigrants who have come into this country since April.

In addition, a series of new revelations this week further demolish the administration’s narrative about whether or not this is, indeed, a manufactured crisis, and if it is being handled responsibly. For example, thanks to a report by Breitbart News, we learned that the Obama administration is using organizations to find prospective foster homes for some of the unaccompanied children coming across the border, and offering to pay the foster parents more than $6,000 per month, tax free, to house them. What could possibly go wrong?

If that doesn’t work out, the federal government has plans for temporary housing at a Texas resort, with tennis courts, swimming pools, a steam room and sauna, all for the bargain rate of $50 million a year. At least they did until the public became aware of it, at which time they thought better of it. As Washington, D.C. radio talk-show host Chris Plante said, maybe they should have thought to offer that first to homeless or disabled vets. Did anyone consider that?

Breitbart also disclosed material in a leaked report from the El Paso Intelligence Center, which combines information from Homeland Security and the Drug Enforcement Administration, among a number of other government agencies. The report states, “Of the 230 total migrants interviewed, 219 cited the primary reason for migrating to the United States was the perception of U.S. immigration laws granting free passes or permisos…” In other words, it isn’t, as the administration and its allies in the media argue, an uptick in violence back home in Central America that is driving this wave of illegal immigrants into this country.

As recently as last year, President Barack Obama and then-Department of Homeland Security Secretary Janet Napolitano assured the American public that the border was secure. “The amount of manpower, technology, everything else that we have put on that border is simply amazing,“Secretary Napolitano toldABC News. “This is not the same border that was.”

“We’re putting mobile surveillance so that we can move around and watch, and we have increased boots on the ground,” she continued.

As for President Obama, he assured the public in 2011 that “Under Secretary Napolitano’s leadership, we have strengthened border security beyond what many believed was possible.”

The problem is, however, even that increase in numbers wouldn’t help if the additional staff is only assigned to “processing duties,“instead of patrolling the border and sending illegal immigrants back home. A National Border Patrol Council spokesman, Hector Garza, recently told CNN, “At this point about 70 percent of our border patrol agents in this area are being reassigned for processing duties,” adding, “What that means is that we’re leaving approximately 30 percent of our Border Patrol agents to actually do field work, to actually patrol our border, and what that creates is a very porous border where dangerous criminals, dangerous drugs are entering our country undetected, and they’re making their way to our communities.”

Federal government is “aiding and abetting” the illegal aliens

Garza is just the kind of public servant that America badly needs more of these days. He won’t be intimidated into keeping quiet about a disastrous situation that he sees and deals with directly on a daily basis. He said that their agents are constantly under attack by the drug cartels, including having shots fired at them, and they’ve even had the Mexican military attack their agents.

Added Garza: “Our border patrol agents come to work every day with their head up high. They’re very good at what they do. We are trained very well. However, at this point our resources are running dry and morale is at a very low level. But our agents continue to do their job as best as they can.”

Also making their way to our communities are unaccompanied children and women with children who are being smuggled in by “coyotes.” Many of these children becomevictims of sex or criminal abuse during the journey. Facilities are becoming overrun with immigrants suffering from mental, emotional, and physical illnesses such lice, scabies, tuberculosis and chicken pox. In order to keep this information from the public, the Department of Health and Human Services imposed a gag order so that the staff at one facility couldn’t tell the press anything. Even a Congressman was initially not allowed to enter a different facility, until he repeatedly pushed for it.

Continuing their strong-arm tactics with the press, the administration issued a series of rules for the media visiting Fort Sill: don’t record anything, ask questions, or, in general, do the investigative work of good journalism. In addition, pictures were to be provided afterwards for the media’s use. One wonders how the media would have reacted had the Bush administration put such restrictions on them during the aftermath of Hurricane Katrina.

If history foretells the future, the administration is again offering thin promises on immigration. “If those children do not have a legal basis for remaining in this country, as I mentioned, it’s unlikely those children will be found to qualify for humanitarian relief, they’ll be sent back,”  said press secretary Josh Earnest. Really? As we reported earlier, “If you’re an unaccompanied minor, or in legalese an unaccompanied alien child (UAC), you can count on social services and pro-bono legal support to help you stay in the country and reunite with relatives who already live here.” More specifically, Safe Passage Project Director Lenni Benson told The New York Times in May that 90 percent of UACs “qualify for immigration relief, allowing them to remain in the United States legally.”

In addition, “The vast majority of 50,000 unaccompanied youths and children who have illegally crossed the Texas border during the last few months have been successfully delivered by federal agencies to their relatives living in the United States..,” reports The Daily Caller. “A second New York Times article report revealed that officials have caught an additional 240,000 Central American migrants since April, and are transporting many of them to their destinations throughout the United States.” Mothers and children are caught by the Border Patrol, safely picked up, and then bused throughout the United States with the thin requirement that they later appear at a deportation court proceeding.

President Obama would like Americans to believe that his latest initiative in requesting additional funding from Congress and the power to expedite the deportation of Central American illegal alien children means that he truly is getting tough on immigration, and that he’s not ignoring what’s happening south of the border.  He has chosen to conveniently blame this on a 2008 law that was passed by a bipartisan vote under President Bush. This law forbids the government from sending back non-Mexican illegal alien children “rapidly,” according to The New York Times.

To this, we must ask “why the crisis now?” The influx of immigrants has been blamed on increasing violence in three countries—El Salvador, Honduras, and Guatemala. Honduras has had the highest murder rate of any nation for years, with 85.5 of 100,000 people murdered in 2012, 79 of 100,000 in 2013, and 90.4 of 100,000 in 2014, according to Reuters and CNN. Permissive immigration policies by President Obama have allowed the influx of immigrants, wooed by rumors that they may get to stay in the United States, providing the impetus to begin their long journey. For example, the Daily Caller reports, “Top immigration officials choose to not check if the relatives or parents who pick up the children are in the country legally.”

Mexico, which has much stricter immigration enforcement on its southern border than we do, announced last week in a joint press conference with its president and the president of Guatemala that it would be facilitating a 72-hour safe passage permit to move through Mexico to the U.S. border, including providing “financial assistance”and emergency medical care for people crossing their border from Guatemala or Belize.

But amidst all of this we have another longstanding crisis: a journalistic crisis. The media establishment is simply unable to describe the manufactured crisis that is happening because journalists are muzzled by AP Stylebook standards. As National Review recounts:

In 2013, the Associated Press Stylebook, a guidebook used by newspapers nationwide, eliminated the term ‘illegal immigrant’ from its pages. ‘People who were brought into the country as children should not be described as having immigrated illegally,’ the stylebook for news reporters reads. ‘For people granted a temporary right to remain in the U.S. under the Deferred Action for Childhood Arrivals program, use temporary resident status, with details on the program lower in the story.’ The guide also gives this direction: ‘Except in direct quotations, do not use the terms illegal alien, an illegal, illegals or undocumented’ (emphasis in original).

In other words, papers such as The New York Times freely refer to illegal immigrants as just “immigrants,“and other news outlets such as CNN allow their sources to equate anti-illegal immigrant sentiments with “anti-immigrant” hatred. The Times even arguesthat “The besieged border is a myth, and the arrival of a few thousand weary refugee children on buses does not make the myth true.” This type of confusion and distortion should not continue, for the good of the country.

By Peter Paton The current conflicts on Israel's borders with Syria, Gaza and the Sinai make it essential that Israel...