By Doug Hagmann:  The downing of Malaysia Airlines Flight 17 as it flew from Amsterdam to Kuala Lumpur yesterday, killing nearly 300 men, women and children, currently dominates today’s headline-rich environment. Accusations about who is behind this wholesale slaughter of innocents are serving as the drumbeats for war, and they are increasing in volume and tempo. 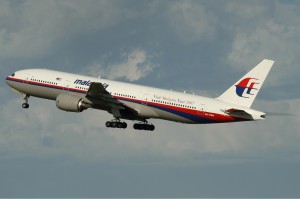 Unfortunately, most Americans and those in the West will fall victim to thinly veiled propaganda pushed by the major news agencies and their captive pundits that is deliberately designed to sway public opinion to a specific agenda—an agenda of war. We are being played, and if we don’t exercise our own intellectual discernment to understand how this incident fits into the larger picture, it will be not just be to our own peril, but to the peril of our children and generations to come.

To understand the significance of the downing of Flight 17, we must look at the bigger picture and think outside of the box created for us by those in power and their facilitators in the media. We must understand a bit of history, and realize that we are not seeing anything new in terms of tactics or orchestration.

To anyone who has been paying the least bit of attention, it is obvious that the global power structure is being reordered to meet a specific and predetermined design. We are witnessing orchestrated global chaos that transcends partisan politics and has been long in the making. We need to view the current geopolitical events in a panoramic setting, and understand how each of these events are related like cogs in the gear of the globalists. Each geopolitical event of significance is being done by design, but by whose design, when did this restructuring begin, and what is the end-game objective? The answers will not be found coming from the mouths of our leaders or the captured fourth estate. You must look deeper than the sound bites that are creating the drumbeats of war.

As I have previously written, it is important to understand that the Arab Spring was planned far in advance and was not spontaneous. It was never about establishing “democracy” or freeing the oppressed. So too was the planned overthrow of Muammar Gaddafi, and the use of Libya as the marketplace and transit point for weapons of war by a rogue, out-of-control cabal of globalists within the U.S. government and other Western countries.

It was and continues to be war by proxy, where the globalists embedded inside our government have become the captured operatives of a Saudi and pan-Islamic agenda hell-bent on changing the balance of power in the Middle East and all across the northern hemisphere to create a “New World Order.” The problem is that we seem to have lost the capacity to see the bigger picture, willingly turned a blind eye to the machinations of the globalist agenda, or worse, refuse to release our death grip on the false political paradigm. Accordingly and with minimal objections, the restructuring of power is continuing largely unfettered.

This is why and how we find ourselves at this point in world history, where chaos is increasing exponentially. Left unchecked, it will soon make its appearance personal to each of us. Failure to expose the lies and lawlessness of the leadership on both sides of the political spectrum, from the Renegade-in-Chief, his band of in-house outlaws as well as those facilitators holding positions of leadership within each branch of the U.S. federal government, and in addition to the media mouthpieces of disinformation, will most assuredly lead us to global war.

What, you might ask, does this seemingly redundant recap of recent history have to do with a single passenger plane that was shot down over a war zone? Was it merely a tragic, isolated and unforeseeable event?  Based on careful analysis and information into the larger agenda given to me by inside intelligence and financial sources, I say “no.” The reason, I contend, behind the downing of Flight 17 is much more nefarious than I’ve seen discussed elsewhere. Simply stated, it is my belief that we are witnessing the run-up to World War III. We must look through the prism of history to see how Flight 17 can easily become the spark that ignites the dry tinder carefully positioned by the global powers, the financial elite, and those vying for a seat at the table of global power.

As a result of the attack at Benghazi, the plans of the globalists were exposed and temporarily sidelined. The Renegade-in-Chief, Barack Hussein Obama, and his co-conspirators within the U.S. State Department and other Western and Middle Eastern countries were exposed as operating the largest criminal weapons running operation in history. The intent was (and remains) to further change the balance of power by ousting Bashir Assad, replacing Assad with a puppet regime to further advance the Saudi-Wahabbi agenda. Syria of is critical military importance to Russia and economic importance to China, so such a plan would cross Putin’s red line.

Despite the obvious, most Americans remain oblivious to the global plans, mostly due to lies that are large enough, repeated often enough, and left unchallenged or reinforced by the media. The “failure” of the initial plans to overthrow Assad were merely a speed bump in the road to the global restructuring.  Instead, plan “B” was implemented, which involved the creation and backing of ISIS to open a new front against Syria. ISIS, equipped by U.S. and Western powers, is indeed on a “Death Race to Damascus” as I previously described.

The criminal cabal that exists within the U.S. government continues to poke at the proverbial Russian bear. The Cold War never ended, it merely took on different forms. The Islamic agenda not only plays an important role in this strategy, but they too are being played by the globalists. Regional conflicts and various civil wars have been and continue to be seeded by Western intelligence agencies to change the balance of power. It’s much like merging the Bay of Pigs with the real-life version of the movie Groundhog Day. Given such proxy and asymmetrical wars where the Western alliance is creating chaos against Russia and by proxy, China, isn’t it reasonable to expect some tit-for-tat response? And when that response arrives, what might we expect to happen?

In this most recent campaign of global power restructuring to benefit the global political and financial interests, one element has been notably missing. It’s an element we saw immediately following the attacks of September 11, 2001. Decades before that, it was an element missing from the American populace in the run-up to World War I: the tide of public opinion.

Students of history will recall that it was not until the sinking of the Lusitania on May 7, 1915, that killed nearly 1200 people that the tide of public opinion turned in America. Until then, the American people had no desire to enter the war. With that single incident, where the Lusitania was traveling though an area known for its danger from German U-Boats, and traveling against many warnings, that public sentiment was manipulated. The sinking of the Lusitania turned public opinion in the U.S., and many other countries against Germany. It resulted in the U.S. entering World War I. That single incident became an iconic symbol in military recruiting campaigns of why the war was being fought.

While the leaders and pundits point the fingers of blame to who shot down Malaysia Airlines Flight 17, wouldn’t it be pertinent to question why this particular flight was flying over a designated war zone contrary to standard operational procedures? This flight was in the same area as other military transport planes that were shot down in the days and weeks before. Like the Lusitania, however, warnings were apparently discarded… or perhaps the risk downplayed. Many will dismiss this claim out of hand, asserting that the flight was traveling at too high an altitude and too fast to be victimized by the wrath of regional conflict. Perhaps those making such assertions should make their case to the families of the victims rather than on the media talk shows.

As the photos of the dead are used as tools of propaganda, emotion and demonization, however warranted, overshadows rational analysis and pertinent inquiries. The globalists and their pundit cheerleaders will continue to beat the drums of war, making the case for U.S. involvement, reminiscent of 1915. Those who fail to learn from history, we are told, are doomed to repeat it.

The ultimate control of Ukraine, or who controls Ukraine, is hanging in the balance. The fight for control exists between the West and Russia, or more precisely, a Western multinational interest that includes Saudi Arabia and others, integrated with the International Monetary Fund (IMF), and a Russia-China alliance. According to “V, The Guerrilla Economist” whom I have interviewed on numerous occasions, at issue is the “New Silk Road.” That is a physical road—a corridor, that connects China and Russia to Europe for the benefit of the Eurasian trade zone. And most importantly, there can be no EurAsian Trade Zone without Ukraine, which has an economic output second only to Russia.

Lest we forget, it was the IMF that was first entity on the ground in Ukraine as the “conflict” began. It is the goal of the globalists to collapse not just the U.S. dollar and our economy, but take the entire global economy down in order to establish a single global currency. We must not only understand the enormity of the lies being forced upon us, but the magnitude of the agenda. At a time when we cannot get truthful answers to topics ranging from Benghazi, missing IRS e-mails and every other subject of import, and as lawlessness has overtaken our leadership, it is incumbent upon us to question everything.

We are witnessing a very dangerous game being played out by the powers above those we recognize as leaders. This process of global restructuring is deadly serious, and as we’ve seen, quite deadly. As long as we are silent about the evil machinations of the globalist powers, they will continue to advance their agenda.

We must consider the downing of Flight 17 as part of the larger “panorama of peril” and not fall into the trap set before us, for if we do, we will subjugate ourselves and our future generations to the oppression and bondage of a New World Order.