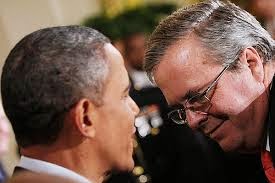 As reported at the reference, Republican Jeb Bush said the following, in part, about those who come to America illegally:

“Yes, they broke the law, but it’s not a felony. It’s an act of love. It’s an act of commitment to your family. I honestly think that that is a different kind of crime that there should be a price paid, but it shouldn’t rile people up that people are actually coming to this country to provide for their families.”

So, perhaps Bush can explain the whereabouts of that “love” when it comes to the parents of thousands of children(some as young as two!) whom have stormed US borders and created a horrific “humanitarian crisis”?

The reality is that coming to America illegally is a deadly serious and dangerous venture, even for mature adults.

For defenseless children, illegal migration can lead to death or serious injury, being victimized by sex trafficking, exploitation by Mexican drug cartels, and other heinous crimes at the hands of unsavory thugs who have no regard for the lives or well being of innocent children.

Allowing, or even encouraging, young children to assume the risks of coming to the US illegally portends a complete lack of common sense and anything but “Love.”

By foolishly trying to sugar-coat illegal immigration as an act of “Love,” Jeb Bush has demonstrated his own lack of common sense and what should be a fatal weakness as a possible presidential candidate in 2016.

Jeb Bush, often presumed to be the “smart” Bush, is actually challenging W. for dunce honors in the Bush family!

In Case You Missed It:  DoD data show that 60% of "covid" hospitalizations in 65 and older patients are "fully vaccinated"
Posted in Freedoms.