Lode Vanoost, also a former Deputy Speaker of Belgium’s House of Representatives on the jetliner that crashed in Ukraine  stressed that collecting evidence takes “weeks and months”, everything else is “jumping to conclusions”. This at the same time may lead to further escalation in the region. 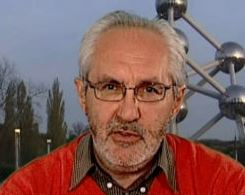 “But this is a very volatile situation – all wars have started like this, because of things like this: speculating and putting the blame before there is any evidence to come to any conclusion,”  he says.

Lode Vanoost: We should make very clear first of all that after a tragedy, catastrophe like this that the relatives of the victims deserve thorough investigation by independent sources. When you say evidence this is something that is produced by experts on the ground. There are programs on air crashes on National Geographic – it takes weeks and month before you can to jump to any conclusions. Whatever is being said now is just speculations for political motives.

Interviewer: Why were both media and politicians so quick to jump to conclusions?

Lode Vanoost: This is too good opportunity to once again play the blame game on Russia and on insurgents in eastern Ukraine. It is too good an opportunity to miss. How this will turn out in the long-term remains to be seen. But this is a very volatile situation – all wars have started like this, because of things like this: speculating and putting the blame before there is any evidence to come to any conclusion.

Interviewer: How confident can we be that the investigation into the crash will be objective and not politicized?

Interviewer: If it turns out the plane was indeed shot down, what would the implications be for whoever will be found responsible?

Lode Vanoost: There is no element that can already give us an opportunity to come to conclusions, so I am not going to speculate on what will happen. It is pretty obvious that this plane was shot down, not had an accident. Who is to blame? There are precedents, there have been similar events. In 1983 Soviet Union downed an American [Korean] airline. What happened after that? The United States downed an Iranian airline, if I am not mistaking, in 1988. Look what happened to those perpetrators? My guess is that the similar will happen. It is too bad, but I am afraid that real culprits will never be punished. I hope it is different this time, but it is too early to say.

In Case You Missed It:  MURDER WITH DICKS: Dick’s Sporting Goods CEO says she’ll give thousands of dollars to any female employee seeking an abortion
Posted in Freedoms and tagged Belgium, Europe, Jetliner, Ukraine.

By Judi McLeod : The supermarket ‘talking’ shopping cart Michelle Obama will use to push her over-the-top approved food list is a power...